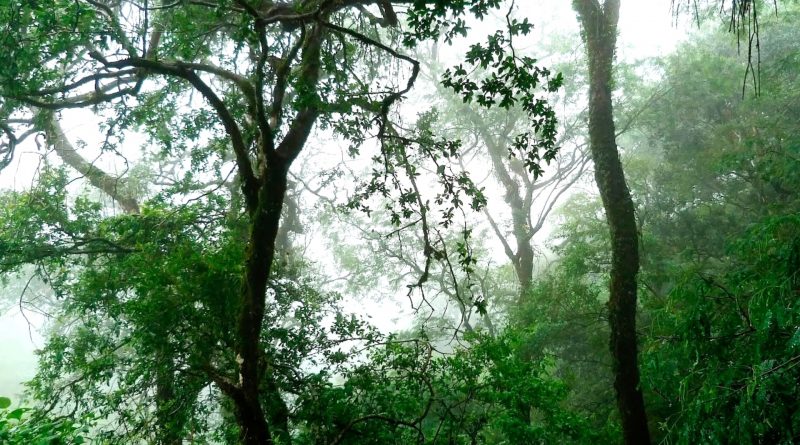 The temperate rainforest of Valdivia is the third largest in the world, with over 248 thousand square kilometers, and is considered a biogeographical island. For this reason, it has a high percentage of endemic species, and is considered to be one of the 34 richest biodiversity sites on the planet. It is a larger area of ​​Great Britain that extends over a gigantic surface near the west coast of South America, mainly in Chile but which also covers parts of Argentina. This forest takes its name from the city of Valdivia, and consists of an undergrowth of ferns and bamboo, as well as the evergreen tree species that make it up. It is a very important eco-region and, therefore, considered by the most important environmental organizations on the planet, at the top of the list of ecosystems to be preserved. The Valdivia forest consists mainly of evergreen magnoliophytes (angiosperms) and there are conifers and deciduous plants typical of Mediterranean climates, with a dense undergrowth, as we mentioned ferns and bamboo.

This eco region, unique among the temperate rainforests of South America, together with the forests of the islands of Juan Fernandez (to understand those where the novel by Robinson Crusoe is set), hosts an extraordinary biodiversity, with many plants and animals that can not be found no other part on the face of the Earth. Inside there are about 35 protected areas, including parks, reserves and natural monuments. Unfortunately, the invasion of “civilization” is putting this ecosystem into serious crisis; it is in fact threatened by economic activities – in many areas its unique flora is replaced by exotic species such as pines and eucalyptus – and by infrastructure (such as the motorways that cross it, and hydroelectric projects). Among the unique species we remember the Alerce (Fitzroya cupressoides), a tree, similar to the sequoia, able to live up to 4,000 years and reach heights of 70 meters and four in diameter; to understand more about the tower of Pisa which is 63 meters high. The Fitzroya cupressoides (also known as the Patagonian cypress), the only species of the genus Fitzroya, is a conifer typical of Chile and Argentina. The government of Chile has moved in its favor and decided to protect this species which, among other things, grows very slowly and is a national monument that can not legally be cut. Unfortunately, its hard and strong wood has led to a ruthless race to illegal cutting. In recent times, environmentalists have had to launch a massive international campaign to demand greater protection of the alerce and finally the Chilean government has dropped the reservations posed to the inclusion of this tree in Appendix 1 of the CITES (the International Convention on International Trade of threatened animal and plant species), or the list of species for which the absolute prohibition of trade is in force. This means that Chile will therefore no longer grant export permits for the Fitzroya cupressoides wood and, with the protection of this species, the undergrowth and the whole ecosystem will be better protected. This result is of fundamental importance since in 1987 Argentina had proposed to include alerce in the CITES and the members of the Convention accepted, but Chile opposed it. The species could be cut, even if with restrictions, and marketed. Unfortunately, this situation led to the black market of alerce wood which reached the value of 5,000 dollars per cubic meter and this led, according to estimates, to the cut, in this period, of over 30,000 hectares of forest. Among the main culprits of this illegal trade were discovered three US companies that had imported alerce from Chile. Among the typical flora of the Valdivian forest we remember: Myrtle (Luma apiculata), Hazel (Gevuina nocciola), Coigüe or Coihue (Nothofagus dombeyi), Colihue (Chusquea culeou), Copihue (Lapageria rosea), the national flower of Chile Luma (Amomyrtus luma), Murta (Ugni molinae), Notro (Embothrium coccineum), Quila (Chusquea Quila) and Tineo (Weinmannia trichosperma). Among the fauna: Skunks or patagónica puff, Huemul, Huina or red cat, Dromiciops, Myotis, pudú, puma, runcho mouse opossum, bandurria, Cauquen, black-necked swan, Chucao, Loro choroy, Tiuque or Chimango, Treile, queltehue or south tern, slender lizard, Valdiviana lizard, Chilean frog, Darwin frog, Sapito three stripes, Sylvan Sapito, Toad Mehuín, Toad red spots. Among the mushrooms: Changle or coral, Mount barks, dead fingers, Cortinarius magellanicus and others. In short, a unique and unrepeatable biogeography island.