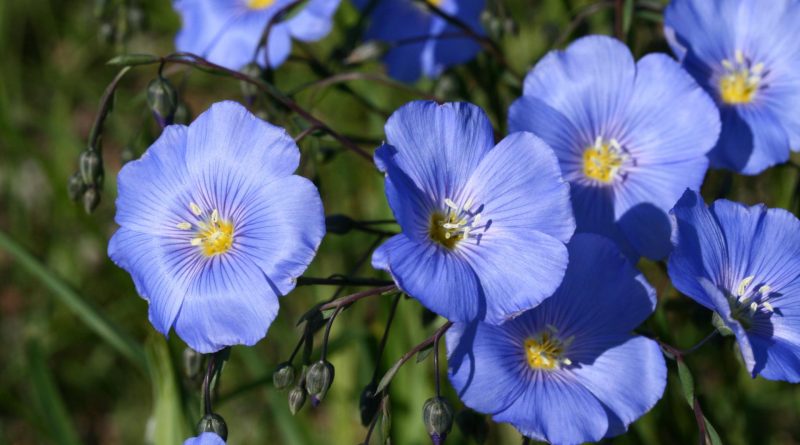 The common flax (Linum usitatissimum L., 1753) is a plant belonging to the Linaceae family and is one of the first domesticated crops.

Etymology –
The term Linum, from which the Linaceae family derives, comes from the Greek λίνον línon, which later became linum in Latin and then linen. The epithet usitatissimum is the Latin superlative of usitatus usual, common, usual: very common.

Geographic Distribution and Habitat –
The Linum usitatissimum is present in almost all areas of the world, but with some important shortcomings of continental nature or climatic zones. The origin of the plant seems to be in the area between Europe and the Caucasus. 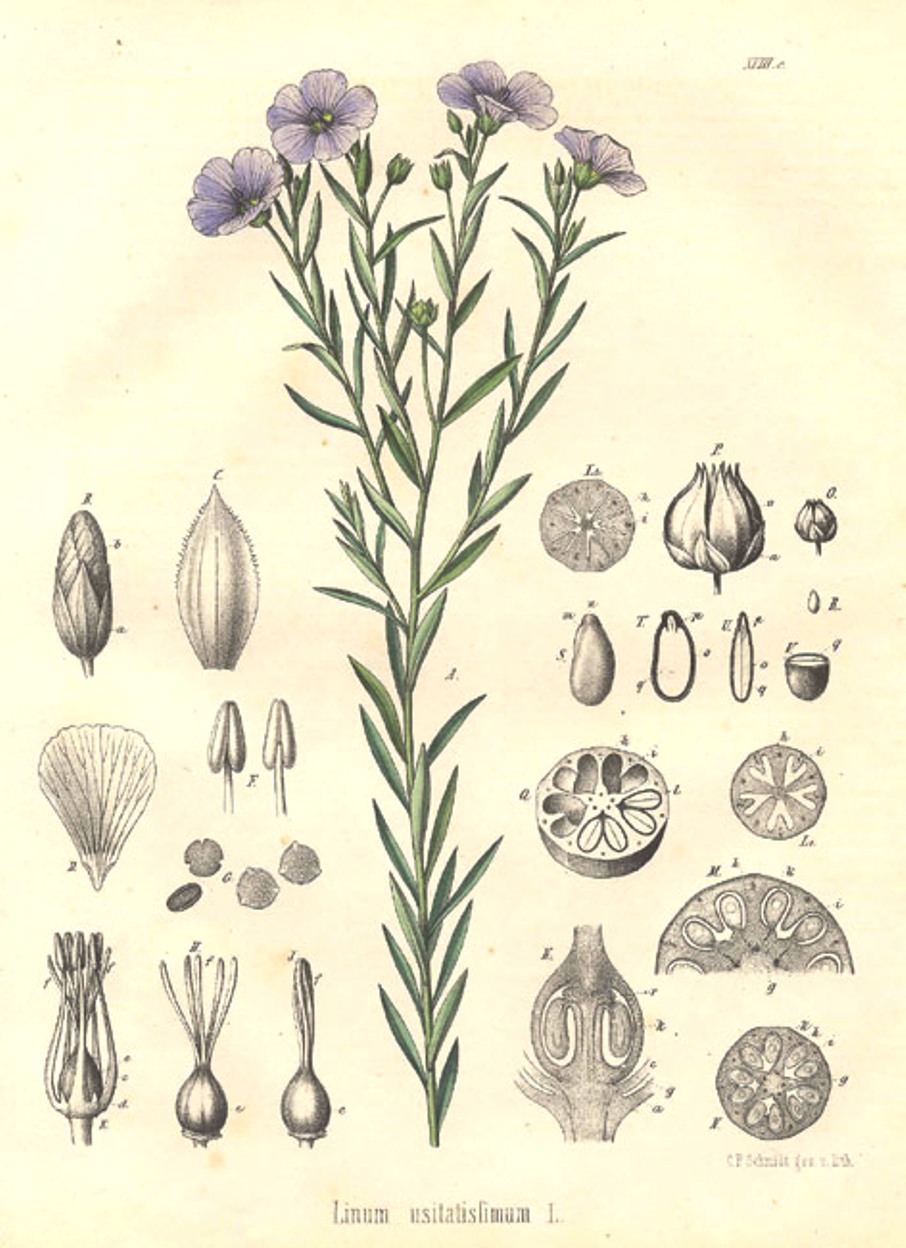 Description –
Linum usitatissimum is an annual herbaceous species with an erect and fragile stem between the ages of 30 and 60; it has tender and lanceolate leaves and large blue-sky flowers with 5 sepals, 5 petals and 5 yellow stamens. Within the fruits (capsules) we find small seeds, colored dark brown and straw yellow (affects the variety). It has a short tap root.

Cultivation –
The common flax is known and cultivated since antiquity in Ethiopia and Egypt; moreover, in a cave in Georgia, dyed linen fibers were found, dating back to around 30,000 BC In the Mediterranean area, the first evidence of the cultivation and use of flax dates back over 6,000 years, while the introduction in the North-Europe it happened in pre-Roman times. It is a species that grows easily in regions with a temperate climate but it is in the coldest countries that the best fiber production is obtained; in fact Russia, the Netherlands, France and Romania are among the world’s leading producers of fiber. Linen is an annual plant, with a vegetative cycle of about four months. For the cultivation of Lino read the following card.

Uses and Traditions –
The common flax is grown both for its seeds and its fiber. It is a plant from which parts can be obtained various products: textiles, paper, medicines, various cordages. From the seeds of the flax is obtained both the flour and the linseed oil, edible, which is used both as a food supplement and as an ingredient in products for wood, which in the paint industry. The common linen is also used in the cosmetic industry as a basic ingredient for hair and soap gel. Like cotton, linen is also cultivated as an ornamental plant in gardens. Flaxseeds were once used in folk medicine as a laxative and modern medicine is also re-evaluating this use; another use was to use the seeds to make poultices against dry cough. Linseed oil is also used in phytotherapy as an anti-inflammatory and emollient. Because of its content in Omega-3, 6 and 9 it is believed that it can soothe diabetes by stabilizing the level of sugar in the blood, even if excessive consumption can hinder the action of some medicines administered orally for its fiber content. However, linen is better known because a very fine, soft, flexible and resistant fiber is obtained. Unfortunately for its higher production costs, compared to those of cotton, it is often replaced by this even if qualitatively the linen is more valuable. The spread of flax is also ancient in southern Italy, in Sicily the town of Linera (CT) derives its name and origin from the cultivation of flax.

Preparation Mode –
Linen is also cultivated for some food products that are obtained from its seeds such as flour (dark colored) and oil. The seeds, which are particularly rich in fatty acids, with a long chain, can also be consumed in purity, undamaged and dry, or softened in water and consumed as soon as they sprout.