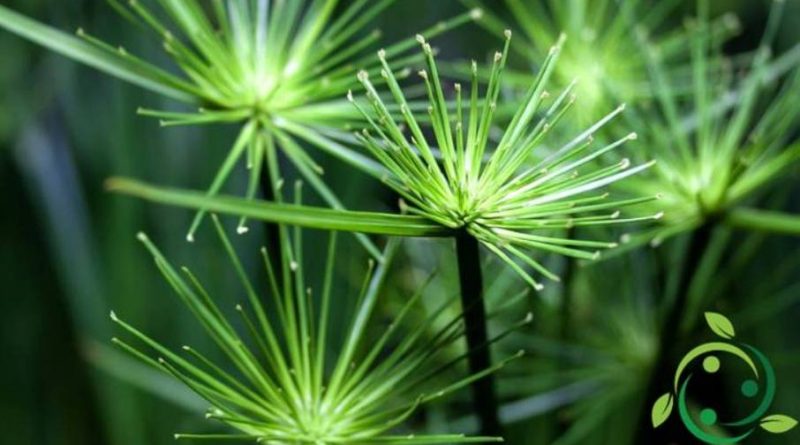 How to grow papyrus

The Egyptian papyrus (Cyperus papyrus L.) is a swamp species, perennial, rhizomatous, belonging to the family Cyperaceae easy to grow both in pots and in the ground. In this sheet we see how to grow the Papyrus and the useful precautions. Its particular posture, consisting of numerous cylindrical stems of bright green that can exceed even the 3 meters of height, make it a plant also for ornamental purposes that is suitable both in the apartment and outdoors under conditions that respect certain rules. Characterized by stems that carry leaves only in the apical part in the form of crown tufts and with flowers consisting of umbelliferous inflorescences of 10 to 30 centimeters long, formed by numerous ears of straw-colored or greenish color.

Recall that the papyrus in Ancient Egypt, in addition to the use for the production of paper, was also used for other purposes; in fact the ancient Egyptians used any part of the papyrus: the rhizome to produce fuel; roots and drums for making pots, tools, shoes, rigging; marrow was used as food and as a source of textile fibers and, finally, flowers to make garlands for banquets and ceremonies.
For its cultivation it should be remembered that the papyrus needs bright places but without the direct rays of the sun; the optimal temperature for papyrus cultivation is around 22 ° C while the temperatures are too low. The soil on which to grow the papyrus must be deep, humid, very fertile, well drained and, possibly, mixed with pieces of coal.
The papyrus can live immersed in fresh water but can be grown directly in the ground as long as the Papyrus plant is abundantly watered throughout the growing season. Irrigation should be suspended in winter, but the ground must always be kept moist by resorting to periodic spraying with non-calcareous water. In case of lack of water the leaves are yellowed.
If grown in pots you can fertilize from the period of March until September with liquid fertilizers diluted in the water with which you water. The operation can be repeated every 15 days with small amounts. If grown in the ground or in a special wet environment, you can immerse the compost on a pallet that gradually mineralizes yielding the necessary elements.
The reproduction of the Papyrus can be obtained, in the springtime, either by seed or by cutting or, in autumn, by division of the tufts or rhizomes.
A technique definitely known is that of putting the apical tufts of the papyrus upright in a container filled with water; when the cuttings emit the roots can be potted. If grown in pots, at the beginning of spring it is advisable to repot in a larger container and renew a good part of the soil without damaging the roots.
The pruning of the papyrus consists in the simple elimination of dry or yellowed stems.
Among the most common adversities of the papyrus we recall the aphids, the floury cochineal and the shield cochineal. It is an excellent thing to put in the water where the papyrus is immersed, in the ground or in the pot of the nettle macerate that in addition to providing nourishment to the plants makes it more resistant to parasitic attacks. Fungal diseases suffer from root rot caused by water stagnation; for this reason, in the case of cultivation in partial immersion the waters must never be stagnant.