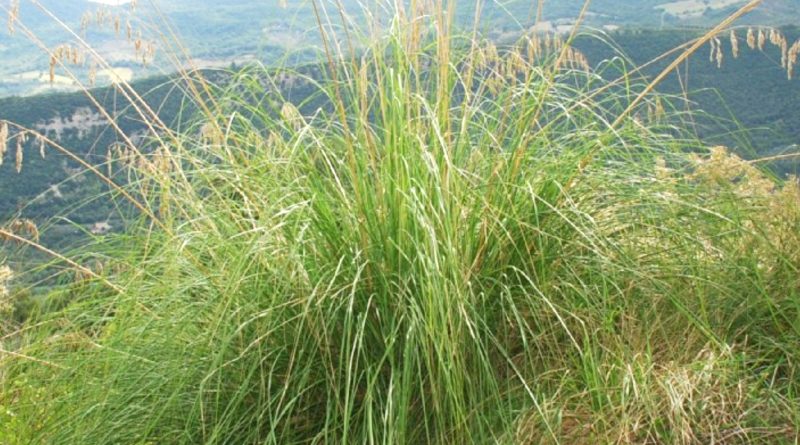 The disa or saracchio (Ampelodesmos mauritanicus (Poir.) Dur. & Schinz) is a perennial plant that belongs to the family of Gramineae, which often lives in pure associations (called ampelodesmeti), typical of the Mediterranean prairie.

Systematics –
The Disa, from the systematic point of view belongs to the Eukaryota Domain, Kingdom Plantae, Magnoliophyta Division, Liliopsida Class, Order Cyperales, Poaceae Family, Subfamily Pooideae, Tribe Ampelodesmeae and therefore to the Genus Ampelodesmos and to the Species A. mauritanicus.

Etymology –
The epithet Ampelodesmos derives from the Greek αμπελος ampelos screw and δεσμός desmos constraint, tie, ligature (as it was used to bind the vine); the term mauritanicus refers to Mauritania.

Geographic Distribution and Habitat –
The Ampelodesmos mauritanicus is native to the Mediterranean regions; in fact it is found in northern Africa, in the coastal areas of Spain, France, the Balkans, Turkey and Asia Minor. In Italy it is present on the arid coastal slopes of the center-south, in Sicily and in the coastal zone of Liguria (Portofino, Capo Noli, Capo Mele), which is the northern limit of its diffusion in Italy.

Description –
Ampelodesmos mauritanicus is a herbaceous species of high growth and with a bushy habit. It is characterized by resistant leaves, up to 1 m long and about 7 mm wide, very rough, with later convoluted margins that can be sharp if you try to pull them by squeezing them between your fingers. On the long and robust culm we find the panicle, very branched and slightly one-sided, with pedunculate spikelets, compressed laterally, 10-15 mm long, with 2-5 flowers. Lemma with 2 teeth at the apex and remains 1-2 mm long, externally hairy on the lower half.

Cultivation –
It is a species that can be grown without any need for irrigation, except in the early stages of germination. To continue the production of the leaves regularly eliminate the withered flowers, unless you want to collect the seeds. At the end of the vegetative cycle, in autumn, cut the aerial part that is drying and that will rebut in spring.

Uses and Traditions –
Ampelodesmos mauritanicus has found in the past several uses typical of rural areas. In some parts of Italy the thin, resistant and smooth stems of the ear are used to roll the dough to prepare the so-called “maccaruna” or “fusilli”. Disa is also an excellent raw material for paper, so research could be developed in this direction. In the areas of Cassaro and Ferla (sr) several stems are tied together and used as a torch during the processions in various religious activities. But its prevalent use of the past was to gather the leathery leaves in bundles to build rough brooms; dried, macerated in hot water, and suitably intertwined that also served to make ropes, fishing nets (the term libana in Campania was used in ancient times to indicate the nets for tuna fishing) and laces; the murals of the dry culms to make mats and shutters. The culm of the Ampelodesmo was also used to define (sistiari) the plant in the sowing of wheat. To this end, after removing the inflorescence from the culm, it was stuck every three meters in the ground (chiantava n’to tirrenu). This indication provided the farmer who sowed broadcasts (spagliu), a precise orientation for the dispersal of seeds. The disa was also used for the production of “criniu”, used for the padding of mattresses, cushions, chairs, etc. and for other countless purposes and uses related to a peasant civilization that no longer exists.

Preparation Mode –
There is no particular information on its use in the kitchen or for therapeutic purposes.