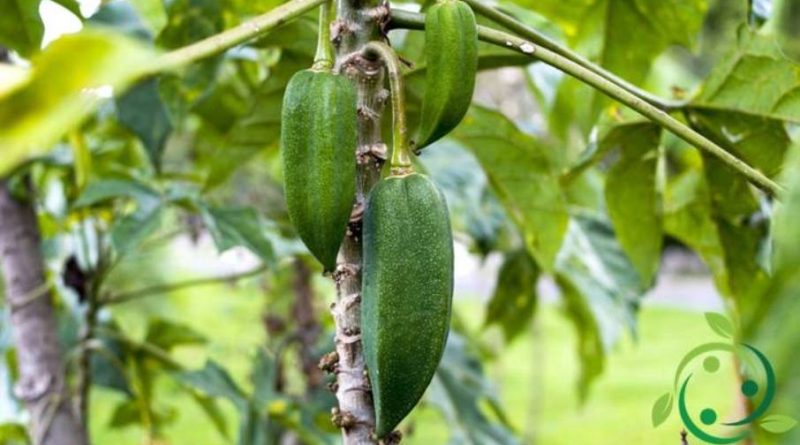 How to cultivate the Babaco

The babaco (Carica × pentagona Heilborn, sin. Vasconcellea × heilbornii) is a natural hybrid, native to South America, obtained from two species of shrubs related to papaya (Carica papaya), Carica pubescens (left Vasconcellea curdinamarcensis) and Carica stipulated (previously stipulated Vasconcellea) of the Caricaceae family.
Babaco is a herbaceous plant, with rapid growth and leaves concentrated in the upper part. The flowers, exclusively female from which fruits are produced, very similar to pumpkins, for parthenocarpy. The babaco, in order to grow, needs a climate with temperatures between 6 and 30 ° C, rather humid and with frequent rainfall. The soil on which the babaco can grow must be dry and free from water stagnation. Babaco can be grown in southern Italy under a cold greenhouse. With regard to irrigation, it is emphasized that in addition to the need for good irrigation, this plant does not tolerate water with high salinity, so in the hypothesis of the beginning of a cultivation of the babaco a water analysis should be carried out to assess the degree of salinity and especially the presence of sodium.

The babaco should be planted in spring and, in addition to the abundant irrigations, the soil must be preliminarily prepared with an abundant organic fertilization, possibly of well-mature manure (do not use nitrates because they are directly transferred to the fruit with consequences assimilation by consumers). In this regard it should be remembered that, being the very demanding phosphorus babaco, its cultivation in calcareous soils is not recommended where the retrogradation of phosphates would not allow the plant to assimilate them.
The production of the first fruits of babaco is already with the beginning of the summer; these develop during the autumn-winter period and then with the beginning of spring they enter the maturation phase which lasts 3-4 months. For a better productive yield the plants are renewed after 2-3 cycles of fruiting; this is done by cutting them to about 20 cm and raising the best bud.
With a careful cultivation technique and above all with good availability of organic substance, it is possible to reach 1,000 quintals per hectare of production.
The fruits are ordinarily collected at the beginning of the veraison; if quality is to be improved, they should be collected as late as possible. In fact, the fruits that ripen naturally on the plant can contain up to 60% of sugars. In Italy, due to the different climatic conditions, this value is much lower.
The most worrying adversities for the Babaco are represented by the rottenness of the root system and the collar caused by the mushrooms of the genus Phythophthora, the Red spider (Tetranichus urticae Koch) and the nematodes. For this reason it is good that the soils of cultivation are very permeable and that you do not resort to fertilizers based on nitrates, which, greatly softening the plant predispose to more attacks.