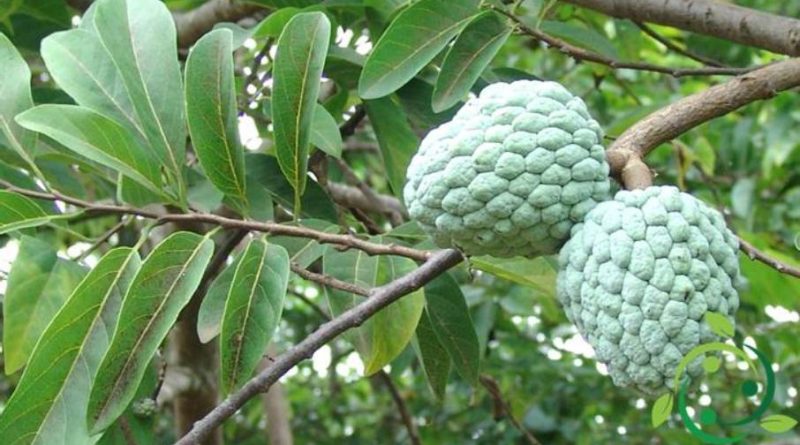 How to cultivate the Anona

In this sheet we will give the necessary elements to understand how to cultivate the Anona. The Annona cherimola belongs to the Annonaceae family and is native to the Andean highlands of Peru, Ecuador, Colombia and Bolivia but is also common in Chile, California, Florida, southern Africa and in various areas of the Mediterranean.
In the Peasi of origin its fruit is called chirimuya, (cirimoia in Iatalia), but it is also known by the English name cherimoya or anona (which also indicates the fruit of all the species of genus Annona). The fruit of the anona is attached directly to the tree with a section of the branch. Inside we find a high number of seeds and it is cultivable in the Mediterranean where it matures in autumn. It has a sub-acid and delicate flavor, described as a mixture of pineapple, mango and strawberry. It is a small tree that can grow up to 7 m, erect, with open hair; it has hairy and greyish branches with alternate, elliptic leaves, 10-25 cm long and 5-7 cm broad, of opaque green in the upper part and hairy in the lower part; the leaves fall in spring, just before the sprouting that takes place from the month of April.

The flowering of the Anona is to climb and lasts for a few months; in the Mediterranean basin it takes place from May onwards. Fertilization is entomophilous, operated by the syrphids and other small insects, in some countries it is done manually. For the Anona cultivation, consider that the optimal temperatures are 18-25 ° C in summer and 5-18 ° C in winter; temperatures below zero and frosts cause irreparable damage to the plants. From the pedological point of view, the Anona adapts to many types of land as long as no stagnation occurs. There are several varieties of Anona; these are distinguished from each other based on the shape of the fruit and the age of ripening; the selection of these varieties took place in the countries of origin; we mention some of them: Fino de Jete, Campas, Mantecosa, Negrito and Cristallino in Spain; Reretai and Burtans in New Zealand; Booth, Chaffey, Whaley, Carter and Bonita in California. The most common cultivars in Latin America are: Sander, Namas, Chavez, Kumbe, Chiuna Temprana and Tardia (Peru), Concha Lisa, Broncheada (Chile), Royale and Bosque (Ecuador).
The Annona cherimola is propagated by seed, with grafting the following year in April or September. The most adopted form of breeding is the 60-80 cm scaffolding vase and the sixths of the plant around 6 x 6. The pruning must be annual with shortening cuts of the branches of a year just before the budding, because we expect the fall of the leaves, to avoid that the fruiting formations are pushed up; also the branches are removed too close to avoid mutual competition and give more air to the plant. For the fertilization we recommend the organic one with mature manure at the end of the winter mixing it with the first processing of spring grasses. A second fertilization with organic compost can be done after fruit set and first growth. Avoid absolutely chemical fertilizers and above all synthetic nitrates.
For irrigated supplies, consider that these are necessary during the dry period, in order to favor the setting; in the Mediterranean basin, in the months of September and October in the absence of rains it is essential to intervene because it is during this period that the maximum growth of the fruit is achieved. Among the harmful insects we remember the fruit fly, the moth and the cochineals. You can intervene with products based on Neem oil (also useful against fungal infections) and Marseilles soap (especially for cochineals). In the Mediterranean the ripening of the fruits is in October-November, while those obtained from the blooming of late summer come to maturity at the beginning of the following spring. The harvest is carried out when there is a change from bright green to light green, the maturation takes place 3-6 days after collection. Then the fruit should be consumed immediately as the quality decreases very quickly. The pulp is very pleasant and contains 20% of sugars.