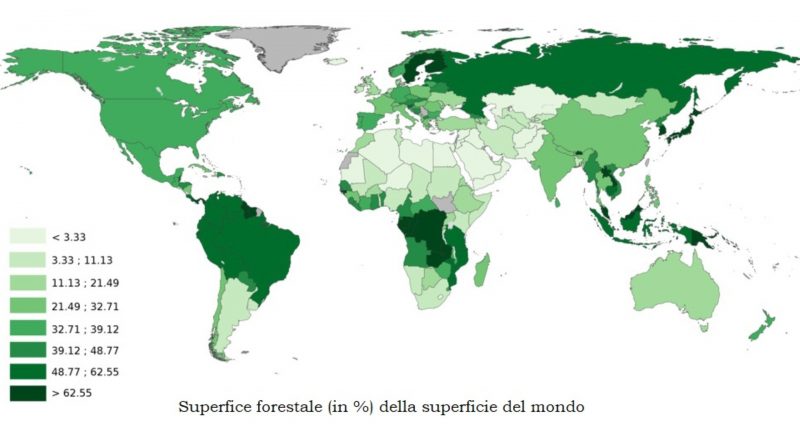 Forest monitoring in the world is one of the most important checks on the state of the planet on earth. From its data and its observations it is possible to obtain fundamental parameters on the state of the environment and its evaluation. According to the global forest assessment report elaborated by the FAO, around 129 million hectares of forest have been lost from 1990 to 2015. The forests in the world are unevenly distributed: they are present with just under half (45%) in tropical areas, with about a third (31%) in the boreal areas and smaller areas in temperate zones (16%) and subtropics (8%).
The loss of 129 million hectares of forest is equivalent to almost the whole of South Africa. In this period it has gone from 31.6% of the world territory (about 4.128 million hectares) in 1990 to 30.6%, (about 3.999 million hectares) in 2015. A deforestation that was carried out mainly in tropical areas.

The situation is different in the temperate countries where the net area of ​​forests has increased while there have been no significant changes in the boreal and subtropical regions. However, if we compare forest area and population we realize that the average per capita forest area has decreased mainly in tropical and subtropical areas and in all other climatic regions, with the exception of temperate, where the rural population is generally decreasing. Although the FAO report shows that the global net deforestation rate has fallen by more than 50% over the last 25 years (rising from 0.18% in the early 1990s to 0.08% in the period 2010-2015), this theme remains of great concern. Mainly because it is the natural forest area (equal to 93% of the world forest area) to record the greatest decline, while the forested area increases, often established for production and which, if well managed, can supply various forest goods and services and help reduce pressure on natural forests.
A Dutch study, published in Science Advances at the beginning of 2017, has verified that the surface of pristine forests has decreased by 7.2% worldwide in the period between 2000 and 2013. In fact, in 2000, IFLs were identified ( Intact Forest Landscape) in 65 countries, two thirds of which in Russia, Brazil and Canada; after 13 years, however, the reduction of forests in the first three countries reached 52%. If this IFL loss trend were to continue at the average rate recorded between 2000 and 2013 in the next 20 years Paraguay, Laos, Cambodia and Equatorial Guinea would lose their entire IFL area and within 60 years another 15 countries would suffer the same fate. It is useless to stress the importance of forests in the world; in fact, besides ensuring food, energy and economic stability, forests are indispensable for the land and the climate and, if well integrated with the agricultural sector, they can increase productivity. In addition, natural forests help conserve genotypes and maintain the composition of natural tree species by providing vital habitats to endangered species. In forests the highest density of biological diversity lives and they are home to more than half of the terrestrial species of animals, plants and insects. Currently, the forest area designated for biodiversity conservation represents 13% of the world’s forests, ie 524 million hectares, with the largest areas in Brazil and the United States. The FAO report shows that forest management has improved over the last 25 years: an increasing number of forest areas have been protected and many countries are improving the management, measurement and monitoring of forest resources, with greater involvement of local communities. in planning and development policies. But the depletion of natural forests above all is a heritage that brings with it an impoverishment of the entire world heritage that can no longer be replaced.