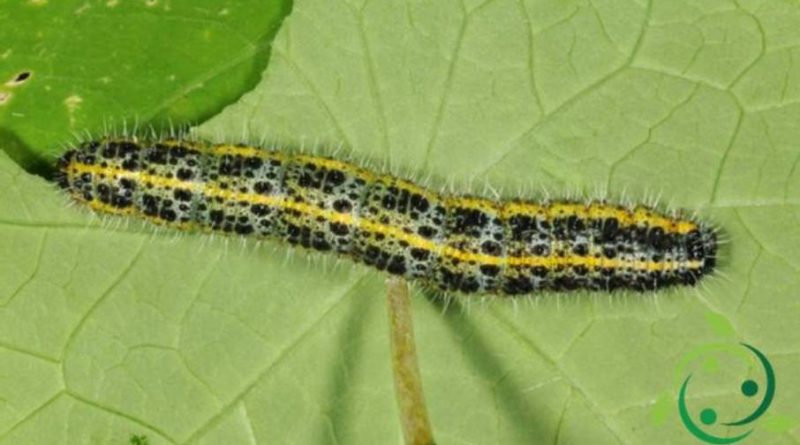 How to fight the cabbage in a biological way

The Greater Cabbage (Pieris brassicae (Linnaeus, 1758)), is a Lepidopterus belonging to the Pieridae family. In this sheet we see how to fight the cabbage in a biological way and the measures to be taken. This insect is particularly attracted to cauliflowers, black broccoli, and cabbages. For the fight against this moth, what is most interesting is the larval stage. The larva is recognized for a predominant bright yellow color and small irregular black spots. On the back there are thin white hairs that are not dangerous or stinging. The adult is a butterfly with white wings of a maximum size of 60 mm and with the characteristic black spots. Recall that similar to the greater cabbage is the Pieris rapae (rapaiola or cavolaia minor) which, however, is characterized by larvae with a color tending to green, but with biology and similar damage. The cavolaia winters at the chrysalis stage remaining hanging in the most various ravines, such as: tree barks, cracks in the walls, perforated bricks, etc ..

With the arrival of spring, the first adults who make their first flights and couplings until the end of May begin to reappear. The adults of this lepidopter lay their eggs on the lower page of the cruciferous leaves. After the hatching of the eggs, after about fifteen days, the first generation larvae come to life and ripen again when they mature. The new adults (of the second flight) then appear generally in the month of July. From these we have the second generation; in this way it is possible to arrive at the 4 generations of climate that infest the crops until late autumn. This insect, present up to 2000 m. s.l.m. is present throughout Italy, causes damage through the feeding of larvae (trophic action) that eat and gnaw the leaves of cabbage leaving only the central ribs of the hardest leaves. The damage can be so serious that it completely compromises the cultivation. Compared to other species of Lepidoptera the biological defense against the cavolaia is simpler and easier. The cabbage is very sensitive to tomato maceration that acts as a repellent against the larvae and can therefore be used in a preventive or curative form. Treatments should always be done at the first light of dawn or in the evening when the larvae are active on the plants and taking care to wet the lower part of the leaves. You can supplement this treatment (always in the morning or end of the day) or do it alone with the bacillus thuringiensis var kurstaki but this is effective in juvenile larval stages, rather than on the more developed larvae. On the use of the bacillus, however, contrary to what is thought, it is good to read this card. But the real biological struggle to this insect consists in the application of rules of the agroecology and of the presence in the farm of plant species (also in association) that allow the increase of the predatory insects of the cavolaia and therefore useful. Among these, one of the most active is the hymenopterous Apanteles glomeratus, which feeds the larvae of the cavolaia with its larvae. Other active predators are the oyster, Trichogramma evanescens oymogago and the Phryxe vulgaris, a diptera Larvevoride, a praxitoid of the cavolaia larvae.