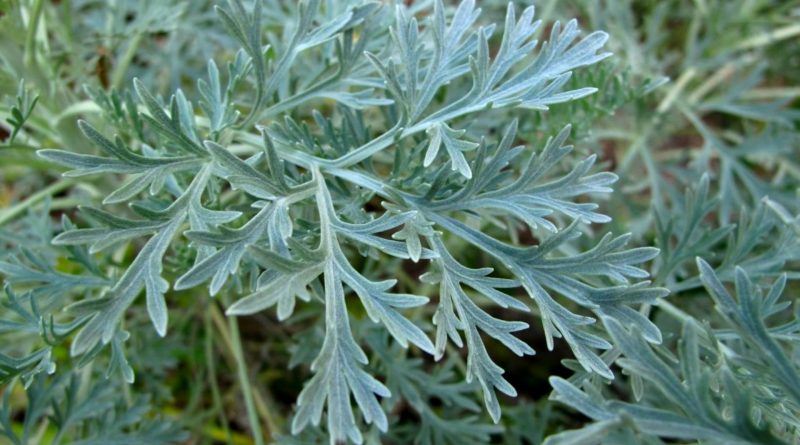 Wormwood (Artemisia absinthium L., 1753) is a medicinal herbaceous species of the Asteraceae family.

Etymology –
The term Artemisia seems to derive from the consort of Mausolus, king of Caria, or from the goddess of hunting (Artemis), or even from a Greek word “artemes” (healthy) for the medicinal properties of plants of the genus Artemisa. The specific epithet absinthium derives from the botanical name with which it was called in Latin, which in turn derived from the ancient Greek “ἀψίνθιον” (apsinthion), perhaps referring to the bitter taste of the drink obtained from this plant.

Geographic Distribution and Habitat –
According to some, Artemisia absinthium originated in central-southern Europe, while for Pignatti, since this plant was already known to the ancient Egyptians and the Greeks, it could come from the Near East. Today the Wormwood is grown in almost all the temperate parts of the world. In Italy it is common everywhere (except in the islands and in the Po Valley). It is a species that grows frequently on the walls and near the inhabited centers of the mountain and submontane regions; but also near uncultivated arid and hedges. It grows preferably on both calcareous and siliceous soils with basic pH, high nutritional and dry values, up to 1100 m s.l.m. 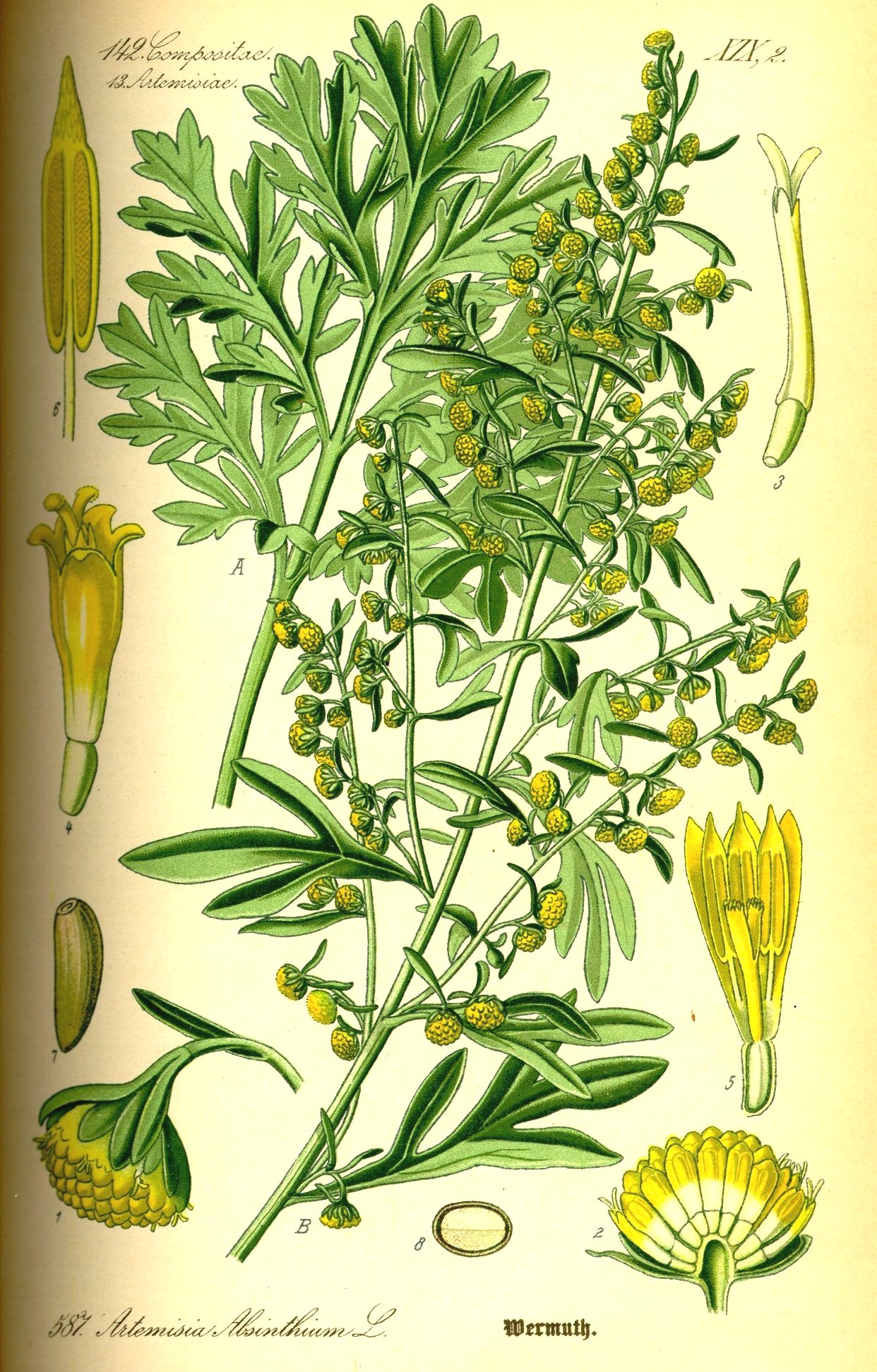 Description –
Artemisia absinthium is a perennial plant that can grow up to 4 – 12 dm. It is a woody species at the base, with wintering buds placed at a height of between 2 and 30 cm with a shrub appearance; it is a deciduous species, with herbaceous parts that dry annually while only the woody parts remain alive. The roots are secondary from the rhizome, while the aerial parts of the stems are semi-woody, rigid and slightly branched in the upper portion and almost not at all in the lower part with gray-green color with hairs and grooved surface. The leaves are apparently greyish or white-tomentose due to the presence of a white hair that covers them give off a strong scent and have a bitter taste. It has a typical terminal panicle inflorescence that is formed by 30 to 90 small hemispherical, sub-elliptic (axillar), pendulous, unilaterally arranged, gold-colored heads composed only of tubular flowers. The flowering is from August to September and the fruits are achenes with a glabrous appearance, almost glossy and with an ellipsoidal and compressed shape.

Cultivation –
Artemisia absinthium can be grown in well-sunny places, with well-drained and moderately endowed soil with organic substance. You can sow directly at home, or place young seedlings in the ground, easy enough to find in the nurseries in spring. The young plants need a fairly moist soil for the first weeks of life, but if they are planted in the spring, humidity should not be a problem; they are plants to be irrigated only in case of real necessity. For the cultivation technique, the following sheet can be consulted.

Uses and Traditions –
Wormwood is known above all for its use in the preparation of the aromatic, very bitter absinthe distillate that is drunk diluted and / or sweetened. It is the main aromatic essence for the preparation of vermouth. For its medicinal properties we have news dating back to antiquity and there are also signs in the Bible. The active ingredients are mainly present in the leaves, stems and flowering tops of the plant, and are tujone, absintin, anabsynmin, artabsin, anabsin and anabsinin. Absinthe is extracted an essential oil containing sesquiterpene lactones such as absintin, anabsynmin, artabsin, anabsin and anabsinin to which the pharmacological properties of the plant can be ascribed. The toxicity of wormwood is instead attributable to the monoterpene tujone and its metabolites. The main functions performed by Wormwood are: cardiotonic, analectic, tonic, digestive, anti-inflammatory, anthelmintic, antiseptic, antispasmodic, (muscle and nervous system); cholagogue, stimulant, stomachic, febrifuge, emmenagogue and vermifuge.

Preparation Mode –
Wormwood is harvested from terminal leaves and flowering ends, for medicinal (and food) purposes, between July and September. In addition, the fresh shoots are suitable to repel insects (fleas and moths) and mice, while using the plant infusion to remove the snails from the gardens (because of the sesquiterpene lactone compounds that are also strongly insecticides). It is also the main ingredient in the preparation of the distillate (which was used in particular by European and American artists) and was then banned in the nineteenth century because of the suspected serious problems of addiction that caused this drink, in fact the addiction was due more than anything else at the high alcohol level of the liqueur. It is also used in the classic Moroccan instead of mint. You can have side effects from intoxication and the symptoms occur with convulsions, hypotension from generalized vasodilatation, decreased heart rate, difficulty breathing.