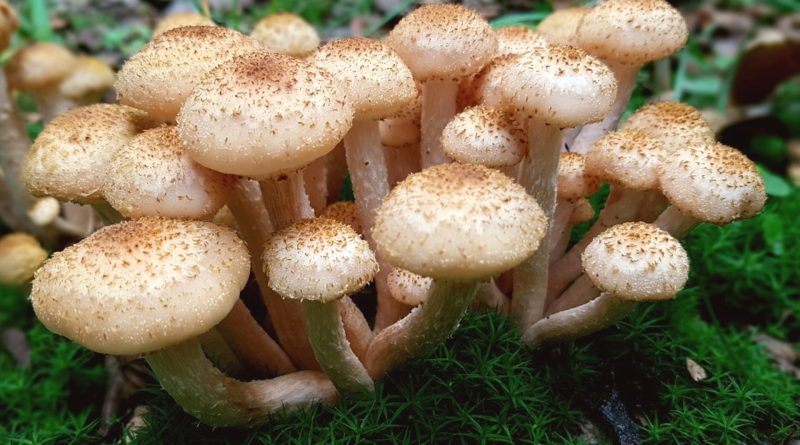 The nail (Armillaria mellea (Vahl) P. Kumm., 1871) is a basidiomycete mushroom belonging to the Physalacriaceae family; called, according to authors of the past, as “mushroom asparagus” because only the upper end of the stem, together with the hat, is edible, while the rest of the stems (especially in adult individuals) is tough and very indigestible.

Systematics –
From the systematic point of view it belongs to the Eukaryota Domain, Funghet Kingdom, Basidiomycota Division, Agaricomycotina Subdivision, Class Agaricomycetes, Subclass Agaricomycetidae, Order Agaricales, Family Physalacriaceae and therefore to the Armillaria Genus and to the A. Mellea Species.

Etymology –
As regards the etymological origin of the Armillaria mellea, the genus comes from the Latin armilla = bracelet, armillary = pertaining to the bracelets, for its ring, while the epithet of the species from the Latin melleus, a, um = ie related to honey (for its color).

Geographic Distribution and Habitat –
Armillaria mellea grows in autumn, bushy, as a parasite of tree stumps and trunks, which can cause death. The mycelium of the fungus is bioluminescent. The main distribution area is in North America and Europe. 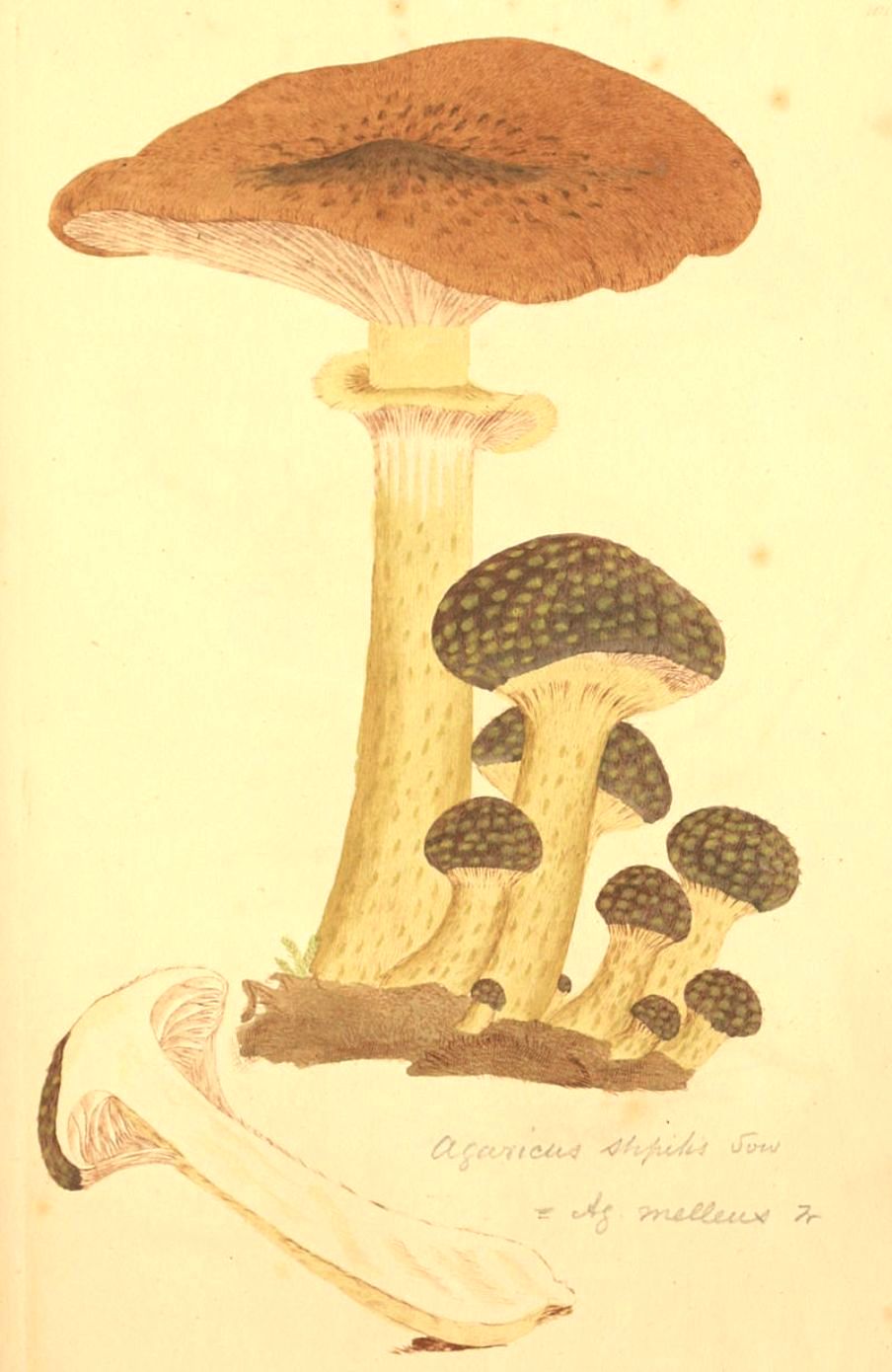 Description –
Armillaria mellea is characterized by a hat ranging from 4-7 up to 15 cm, fleshy, young hemispherical or conical, to become increasingly flattened up to convex and later flat, and sometimes depressed; with a color that varies from honey-yellow or reddish-brown to greenish, with a thin, rolled edge, slightly streaked. On the surface of the hat are scales, thickened in the center and absent in the mature specimens. The lamellae are dense, unequal, white when young and brown or yellowish or with reddish patches in old age. The stem (5-20 × 1-2.7 cm) is cylindrical, tapered, yellowish or brownish, enlarged, curved, brownish-olivaceous and sometimes blackish towards the base, brown in the center, usually welded with other individuals (fungus bushy ), full, then hollow, medullary, pruinose, yellow-rosy and marked by light vertical grooves above the ring. The ring is consistent and evident, white and striped in the upper part, yellowish and with a fluffy appearance in the lower part. The spores are white in mass, smooth, ellipsoidal, 8-9 × 5-6.5 μm. The meat of the Armillaria mellea is tender on the cap and in the upper part of the stem, while it becomes leathery and fibrous in the rest; the color is white or flesh. The smell is sub-zero, more intense fungal in the rather developed specimens; finally it becomes agliaceous and pungent in very old specimens. Finally, the taste is sour and sweet, with a slightly bitter aftertaste that is less pronounced in the younger specimens. It is a chameleon fungus depending on the host strain: honey yellow if it comes from the mulberry, brown or reddish-brown from the oaks, sometimes completely white if it is a guest of Acacia.
Can be confused with Kuehneromyces mutabilis (Schaeff.: Fr.) Singer & A.H. Sm. = Pholiota mutabilis (Schaeff.: Fr.) P. Kumm. at the same excellent edible species, perhaps superior, or with Hipholoma fasciculare (Huds.: Fr.) P. Kumm., otherwise poisonous, which however has lamellae that from greenish yellow become black, in addition to the bitter taste of the meat, the surface of the always smooth hat and the presence of an ephemeral ring in the stem.

Cultivation –
The nail is an inhabitant of the undergrowth very easy to find throughout Italy, and that can be grown.

Uses and Traditions –
Armillaria mellea is a fungus of good edibility but toxic if raw; is a mushroom very sought after, appreciated and consumed since ever, but not without risks and since it is one of the most consumed mushrooms in the world, there are many poisonings ascribed to its consumption.
The nails contain in fact protein toxins (haemolines) that are thermolabile at 65-70 ° C and are inactivated by boiling the fungus in water for 10-15 minutes. The cooking water should always be thrown away. During cooking, if not subjected to proper pre-rolling, the fungus secretes a slightly poisonous viscous liquid. We recommend freezing only after cooking. During cooking the meat becomes dark, almost black and except for very young specimens, only the hat is cooked.

Preparation Mode –
It is a mushroom that is consumed in wet, sautéed, as a condiment for risotto and with meat and sausage. The nails are good if well cooked, excluding the slurry that is formed in the first cooking and the coriaceous stem. They also lend themselves to conservation. It is advisable to froth with a ladle during boiling to eliminate the indigestible viscidume and never collect it after freezing or freeze it raw, in the latter two cases it would become toxic. The best are the small specimens with closed hat and tender stem. Avoid those too big and mature.
To clean the nails, it is necessary to eliminate the earthy base of the stem and the fibrous part of the larger specimens; then you must brush the hat with a kitchen brush. If you can not completely eliminate the earth, you can pass them very quickly under water and dry them immediately with a towel or absorbent paper.
It is important to boil it before cooking and before consumption it is always advisable to pre-boil, throwing the cooking water, in fact if not subjected to proper pre-rolling, this fungus secretes a slightly poisonous viscous liquid. The cooking water should always be thrown away.
In addition to the various recipes with tacks, it should be noted that the small and firm specimens lend themselves well to preserving in oil or in vinegar.