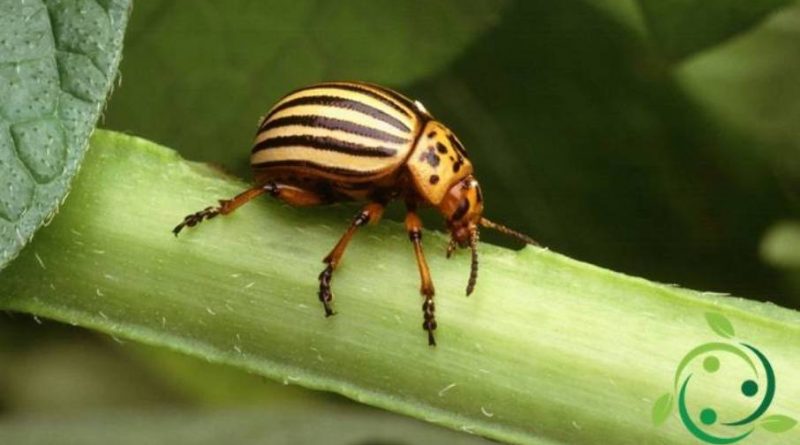 How to fight the potato dorifora in a biological way

The control of many insects of agrarian interest also passes through a careful selection of some agronomic techniques and methods of cultivation. In this practical sheet we see how to combat the potato dorifora in a biological way. The Colorado beetle of the potato (Leptinotarsa ​​decemlineata Say, 1824) is a phytophagous beetle of North American origin that in our areas has no valid antagonists to control it and whose main damage is caused by all the mobile forms that are defoliators; the infected plants are completely defoliated until they can get to death. The plants most affected by this insect are the solanaceous (potatoes, above all but also aubergines, tomatoes, etc.).

This insect that winters underground, begins to emerge when the ground temperature steadily exceeds 10-12 degrees to find it then, especially since May, looking for food and being able to walk to the adult state up to 300 meters to reach the plants to feed on . The Colorado beetle after eating starts to fly, mates and lays its eggs on the low side of the leaves of a healthy plant. The recognition of the insect is easy: the larva is red / orange with head and tubercles black and about 1.5 cm. The adults, birds, a little ‘smaller have a yellow body striped with black (as in the picture). The Colorado beetle cycle reaches two or three generations a year with the most serious damage in May when the first larvae are born.
As stated in the introduction, the first fight or defense is a preventive one.
The first prevention concerns the rotation of the crops on parcels possibly extended; in a family vegetable garden the rotation does not (for obvious dimensional reasons, no effect). A second aspect, too often overlooked is the balance of fertilizers to be applied to plants: excessive quantities of manure or compost and above all nitrate nitrogen predispose the plants to a greater palatability for all the forms of this insect that thus reproduces much more easily. Still on the subject of prevention, the use of nettle macerate, as a preventive measure, gives plants greater resistance and balance.
In small gardens it is possible to intervene manually with the physical elimination especially of larvae from the first appearance; on larger extensions it is an operation that is at least difficult.
Among the systems of struggle allowed in organic farming the main ones are: pyrethrum, bacillus thuringensis, and neem oil. The pyrethrum, even if allowed, has the limit to act only by contact and moreover it is harmful for bees, ladybugs and useful insects. Neem oil also acts by contact, is less effective but is more tolerated by useful insects. Finally, the bacillus (tenebrionis variety) is only suitable for killing larvae but has no effect on adult specimens. Two other methods of biological control are the insertion of the Beauveria bassiana which is an antagonist fungus able to kill the insect, edel the hymenoptera Edovum puttleri, which feeds on the Colorado beetle’s eggs.
If instead you are cultivating a family vegetable garden you can come to the rescue even a single turkey. This animal is particularly fond of the Colorado beetle often managing to eliminate them completely before they can cause serious damage.