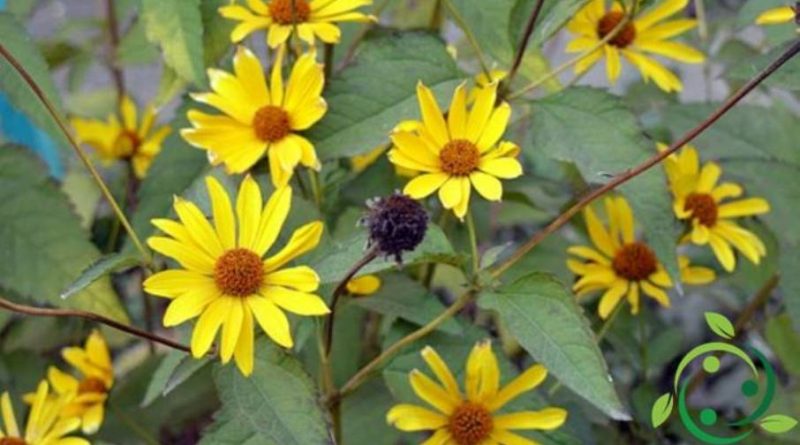 How to grow Jerusalem artichokes in a biological way

In this little guide we see how to grow the Jerusalem artichokes in a biological way. The Jerusalem artichoke, also called German turnip, Jerusalem artichoke or Canadian sunflower (Helianthus tuberosus L., 1753), is a plant cultivated as a vegetable, belonging to the large family (taxonomy) of the Asteraceae and to the genus helianthus, with a flowering inflorescence . It is a vegetable that spontaneously in various arias and along rivers, little known but easy to grow and whose edible part is the tuber.
The Jerusalem artichoke is a very undemanding plant and, if not well groomed, even weeds. Due to its characteristics it must therefore be cultivated in an area of ​​easy circumscription, with a preferably humid habitat.

Jerusalem artichokes can be sown between the end of February and May and are harvested as a winter vegetable. If you start from the tubers they are buried at the end of winter, with the buds upwards. The recommended planting level is 50 cm between the plants and the distance between the rows according to the processing system (manual or mechanical that you will use), with a sowing depth between 10-15 cm. Being a very rustic plant does not go to particular entomological or fungal diseases. Instead, it needs a good supply of water and weeding to eliminate weeds. The only danger can be represented by mice. In an agroecological management of the soils, the mulching technique with straw is preferred, which eliminates the need for the weeding and allows to reduce the water supply.
The harvest of the Jerusalem artichoke is very similar to that of the potato; it is done by digging the tubers from under the stem of the plant starting from a depth of 15 cm (but they also develop at greater depths, which explains the infesting behavior of this plant). The harvesting time is to scale from the beginning of autumn; in this way a periodic harvest can be obtained and therefore it is an ideal cultivation for self-consumption.
Like all crops, after a certain period a rotation should be carried out taking care to eliminate all the tubers of the area where it was previously cultivated. It is a crop that does not need any fertilization because, above all if it is mulched, it makes use of the fertility residues of the previous crops.
The cleaning after the harvest of this tuber is like the potato, but unlike this, these tubers are edible even raw. This little-known tuber has a bitter taste, similar to that of artichoke. Remember that these cooked tubers have a mild laxative effect and good digestive properties. They can also be cooked fried, a bit like potatoes.
For the retrieval of seeds or tubers it is possible either in specialized stores or it is now possible to buy them online.