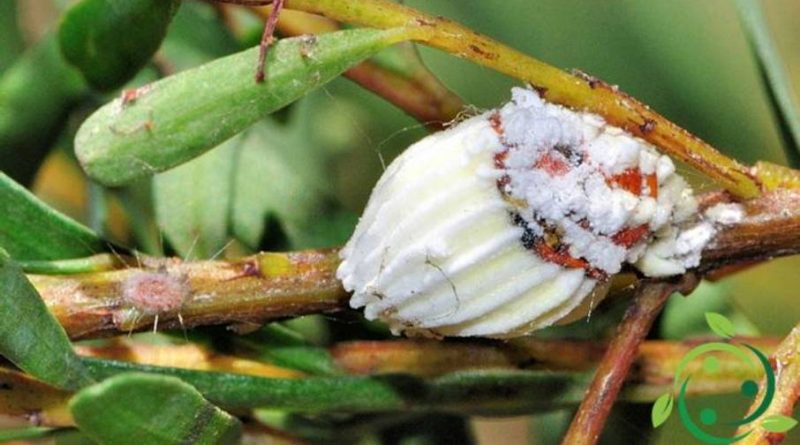 How to fight Icerya purchasi in a biological way

The cochineal cotonosa (Icerya purchasi Maskell, 1878) is a phytofagus insect of the order Rhynchota Homoptera Sternorrhyncha (superfamily Coccoidea, family Margarodidae) that can attack various ornamental and productive plants infesting the structure of the leaves of the plant sucking the lifeblood with production of a sweetened substance (honeydew) that attracts other parasites that feed on this (especially ants) and settlement of mushrooms (fumaggini). The final damage consists in the decay of the plant (for suction of the lymph) in decrease of the synthesising photo surface (for the proliferation of the fumaggine) being able also to lead to the death of the plants. So the infestation of this small insect (which does not exceed 5 mm) must be tackled with preventive methods of prevention but above all of agronomic techniques that diminish the infestation and virulence.

Leaving out here the use of pesticides and synthetic products (such as piretro idi) we see what may be the useful expedients and how to fight Icerya purchasi in a biological way.
First we must know that the spread of this insect increases in conditions of hot and dry climate (especially in summer) especially on citrus or acacia, brooms, pittosporum and robinia.
The first prevention concerns agronomic techniques; among these, the pruning system which, in the most suitable environments for its growth, must allow a better internal aeration of the plant, furthermore the contribution of nitric nitrogen should be totally banned (and replaced with organic substances) especially in these situations as it induces excessive tenderness of tissues and palatability of the same. Another natural remedy is the opportunity to keep the plants clean, especially in dusty environments, by spraying them with simple water or, under conditions of infestation in place with Marseilles soap or, again with the addition of propolis. In this case, just take the liquid Marseille soap to be diluted in the proportion of 25 cc per liter of water. If it is solid, 10-20 g always in the same amount of water. Spraying should be carried out by spraying as much as possible directly on the pests. The insecticidal action obstructs the respiratory organs of parasites that consequently die. The operation must also be performed several times every 3-5 days. The periodic plant cleaning system generates conditions for removing the cochineal system, ants and fumigants.
An interesting technique is also that of the use of Rodolia Cardinalis (which belongs to the family of coccinellids). This coccinellide is widely used even in northern countries even if it can not withstand too harsh temperatures. The technique consists in making launches in the months of April-May and September-October. The number of individuals per launch may vary depending on the infestation; in general there are between 4 and 6 adult specimens for plants, while for orchards the number must increase a lot; moreover it is not necessary to spread them on every plant but for homogeneously distributed areas. We must however have the foresight to make the launches only if the infestation is present, otherwise the launch will be unproductive. Another consideration, which must be taken into account, is that R. Cardinalis does not survive the winter, so in the northern regions it is reintroduced in the spring-summer period so that it can carry out its predation and reproduce.