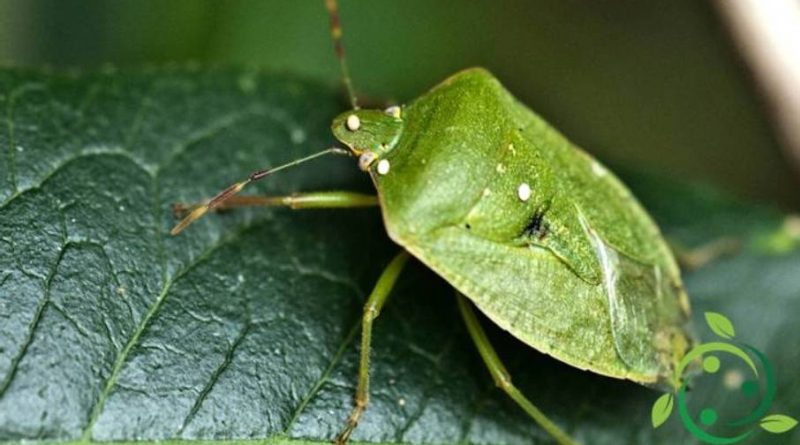 How to fight the green bug in a biological way

The green bug (Nezara viridula L., 1758) is one of the insects that creates more problems for some agricultural and vegetable crops. Tomato is particularly subject. The damage manifests itself on the leaves and on the fruits and is caused by the nutrition bites of all the mobile forms of the plant. Also on the leaves, due to the trophic bites, there are localized necrosis and desiccation, of different degree.
On the tomato, following the punctures, chlorotic aureoles, more or less confluent and evident, appear in the berry during ripening; these, later, become very nuanced localized necrosis. The depreciation of the fruits is then due to the unpleasant taste caused by the secretions of the bites that these insects enter. Added to this are the bacteria that these insects transmit with their bites. Other damages also occur on hazelnuts with altered form and taste and on legumes with necrotic changes to the pod and with a qualitative and quantitative deterioration of the seeds.

Among the chemical interventions allowed in organic farming there are Pyrethroids, to be administered, especially on the tomato, to the appearance of the first mobile forms of this insect. Even in soybeans it is possible to intervene with pyrethroids, but only when the number of mobile forms exceeds a certain threshold (about 4 mobile shapes per meter). But we must be careful not to exceed because these treatments could facilitate the increase of populations of red spider (which is no longer kept at bay by its natural enemies).
The use instead of DIY products is definitely the one that can give the greatest satisfaction. Among these we remember those based on garlic to be sprayed in the evening hours at the base of the plants, which works as an excellent repellent even for adults. Spraying with Marseille soap (in addition) can also help to remove this insect together with other small insects such as aphids.
For small crops, protections can be made with very small mesh fabrics but it is obviously a technique that requires total protection of the plant and an artfully arranged arrangement to prevent the entry of insects.
A final warning to decrease the virulence of these insects is not to use nitric fertilizers that soften all the tissues of the plant lend themselves more to the appetites of these insects.