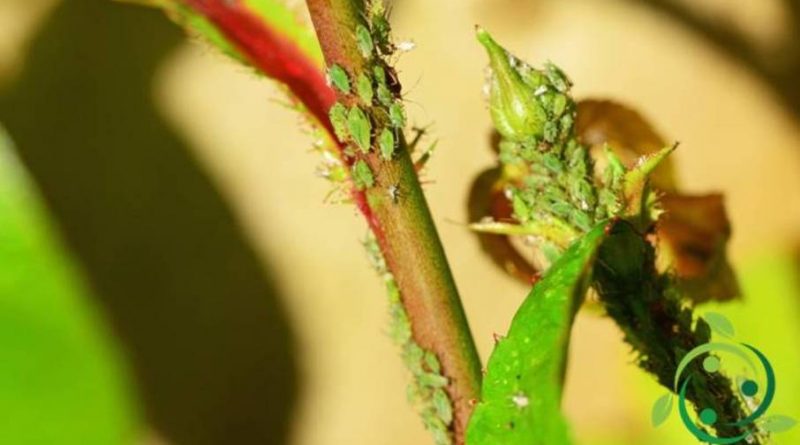 How to fight aphids in a biological way

Aphids, so-called plant lice, (Aphidoidea Geoffroy, 1762) are a superfamily of phytomite insects, included in the order Rhynchota (suborder Homoptera, section Sternorrhyncha). They are tiny-sized insects that can easily attach both vegetables and potted plants. You will be able to recognize them for their bright yellow-green color.
Their presence on the vegetal parts or on the whole plant can be not only a reason of depreciation of the agricultural product but, in some cases, even cause of the plant that is infested.
The direct damage caused by aphids is due to the subtraction of lymph, to the alteration of the physiology due to the enzymes contained in the saliva injected by the maxillary stylets and alteration of the morphoanatomical structure. Indirect damages are instead linked to the propagation of virosis and production of sweetened honeydew.

Being insects that carry out within the annual cycle several generations it is easy to understand how the first fight is a preventive one.
The first prevention obviously concerns the agronomic techniques and the cultivation cycles of your company. Among the general factors that induce the proliferation of parasites (be they insects, mites, fungi, etc.) there is the excessive specialization of agricultural productions. The lack of consociation, rotation or monoculture is in itself an error of an agroecological nature. These aspects are then the basis of the incorrect contributions of reintegration of nutrients (fertilizers) that we operate in our company.
Among these fertilizers, those that create the greatest virulence of these insects (which is valid for all phytophagous species) are nitrates. These fertilizers induce the plants to a greater vegetative development but with softening of the tissues that are much more appreciated and appealing for these insects. This is why it is appropriate to abandon the use above all of these fertilizers in favor of the organic and especially of mature manure.
Another criterion to be adopted is to keep the plants clean (eliminating even with washes of water only) the interested parts to free them of the honeydew on which they develop a symbiotic relationship between fumigates and ants. In this way even the parasite idi (insects that attack the aphids) find better conditions to fulfill their role and, if we want, we can introduce them in the company by buying them in the production laboratories.
The presence of plants (in addition to consociation and rotation) that annoy aphids, such as nasturtium, can increase the effect of lightening their attacks.
If all precautions are taken, we need to adopt remedies with natural insecticides, which do not contain toxic substances either for humans or for the ecosystem.
Among these we remember the pyrethroids (allowed in organic farming) but not totally free from contraindications or insecticides more safe for humans and ecosystem such as: macerated horsetail, decoction garlic, Marseille soap, Neem oil and nettle macerate to which you refer for the modalities and the warnings of use.