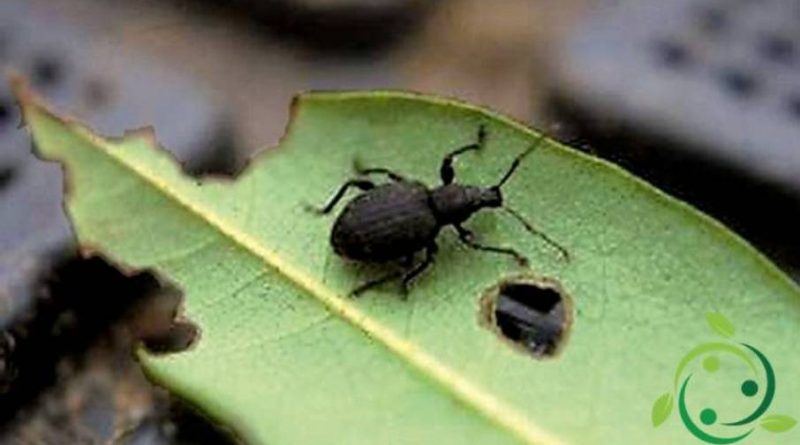 Insects, like all living things, play a fundamental ecological role. In some conditions, however, they can assume high quantitative proportions, so as to create serious problems for agricultural crops. When these conditions occur most of the time it is because we have made mistakes in the agro-ecological organization of our company (or the larger area where the company is included).
This often occurs with an insect that can take such proportions as to create serious problems for ornamental plants and fruit; let’s talk about the Orioorrinco (Otiorhynchus Germar, 1822). Present in the central south of the Italian peninsula, the ozziorinco begins to create problems from the month of May until the arrival of the cold, with a short break in the hottest summer months. This insect of the Coleoptera Curculionidae family, which inhabits the underground passages, after sunset, rises on the plants to feed on tender vegetable parts.

The damage is caused both by the adults, which erode the margins of the leaves in a crescent shape, drastically decreasing the surface for photosynthesis and growth, which from the larvae that are harmful to the tubers, the roots and the base of the plant stems, that dig deep, sometimes causing death.
Among the most affected agricultural plants is the olive tree which can undergo serious attacks to defoliate in some cases especially the young seedlings and lead them to death. The fight against oerorrhyn is predominantly preventive and with precautions based on the criteria of agro ecology. Leaving aside the shaking of the plants at night and the burning of insects fallen on the ground (a technique which, as you can guess, presents a series of difficulties) the first rule to be implemented, since the olive planting, is the application of cardboard strips (cars built) to be fixed at 30-40 cm from the ground, on the trunk, and covered with sticky but natural material that blocks the insects until their death. Among the preventive remedies we remind you to avoid the nitric fertilizers which, making the plant parts more tender, makes them more attractive to this and to other insects. Also important is the consortium with other plants also shrub that “distract” our insect that will also be dedicated to other species. As preventive techniques it is important, during the winter, to work a deep process, opening the ground; in this way they expose the wintering larvae to the intense cold that they can not survive.
Among the biological control techniques one can resort to some entomopathogenic nematodes that parasitize the larvae and are useful both against coleopterans (oziorrhyn), and against the larvae of lepidoptera, diptera and hymenoptera. The nematodes that you release in the ground parasitize the larvae, in which they release symbiont bacteria that lead them to death within 72 hours. Later, the nematodes are able to reproduce on the body of the larva itself, from which they get nourishment. When they are mature, they are looking for new larvae. The periods in which to release these nematodes are spring and summer. In any case, you must subsequently eliminate all the vegetation residues of the affected plants, especially the root systems.