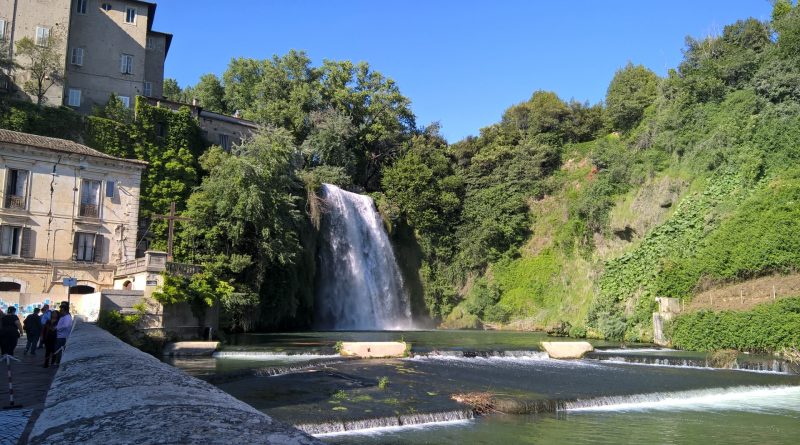 It is located in Isola del Liri (province of Frosinone) one of the most spectacular waterfalls in Italy. A marvelous waterfall right in the center of the city with the whole city center spread over an islet formed by the bifurcation of the river Liri, which creates two waterfalls, both spectacular. The picturesque and impetuous Great Waterfall that paints unusual and beautiful landscapes in a historical center.

So the river Liri, coming from the plain of Sora, after having touched the millenary monastery of San Domenico, arrived near the rocky base of travertine on which stands the majestic Castle Boncompagni – Viscogliosi, is divided into two arms, then wrapping as a island under the city. The left arm of this river feeds the Cascata Grande, also called Cascata Verticale, with a great jump of about 27 meters. From the right branch of the Liri a second, lower waterfall originates: the Cascata del Valcatoio. Its waters sink down along a rocky wall tilted for 160 meters until you reach the lower plaga.
The Liri River has always determined the wealth and development of these areas. In fact, with the advent of the industrial economy, it played a fundamental role as an inexhaustible source of energy, both mechanical and hydroelectric, for the town of Isola del Liri.
The origin of this well-being was born during the Lordship of the Boncompagni family, Duchi di Sora from 1580 to 1786; in fact in Isola del Liri and in the territory of the Media Valle del Liri, the first industrial settlements arose: the paper and wool factories along the river of the same name, whose activities were connected to the exploitation of hydraulic energy.
Unfortunately, in recent times the river Liri has greatly diminished its reach, arousing perplexity. The low range of Liri is largely due to withdrawals for irrigation and industrial uses that are not always respectful in the use of water itself. Added to this are climate changes with different pluviometric trends that are also leading to a change in the ecological system.
Unfortunately, the myopia of resource management of much of the Italian territory risks losing the great ecological and economic potential that have helped to create a great civilization.