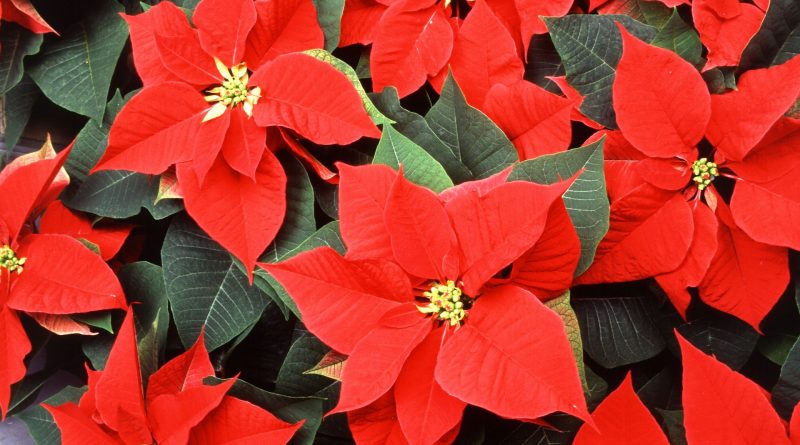 Euphorbia pulcherrima also known as Poinsettia or Poinsettia, belongs to the Euphorbiaceae family; it is an ornamental plant native to Mexico where it grows spontaneously and where it can also reach a height between two and four meters.

Etymology –
The term of the genus Euphorbia (which was assigned by Linnaeus) comes from the Latin euphorbium, which in turn comes from the Greek εὐφόρβιον euphórbion, from the personal name Εὔφορβος Éuphorbos, ceruse of Juba II of Mauretania, as reported by Pliny. According to others, it comes from Euphorbium, which indicated the plants (which we now know under the genus considered) that produced a poisonous and poisonous milky juice used in the medicine of the time. According to other sources, Euphorbia could derive from Euphorbius, which is made up of two words: εὖ eû (“good”) and φορβή phorbḗ, (“pasture” or “fodder”), whose final meaning could take on various meanings. The specific epithet Pulcherrima obviously means “the most beautiful”.
The other name by which this plant is known, namely Poinsettia, derives from Joel Roberts Poinsett, the first United States Ambassador to Mexico, who introduced the plant to the United States in 1825.
The other names with which this plant is known are: Mexican flame leaf, Christmas star, Winter rose, Noche Buena, Lalupatae, Atatürk çiçeği (“Flower of Atatürk”, in Turkey), Αλεξανδρινό (transliterated “Alexandrinò”, ie Alexandrian, in Greece), Easter, and Poinsettia (in Italy).

Geographic Distribution and Habitat –
As already mentioned, the Christmas Star, (Euphorbia pulcherrima) is a plant that in its natural habitat can reach a height of 4 meters, while in the domestic environments of us Italians, it is difficult to live longer than the Christmas period. It is however a popular garden plant in tropical and subtropical areas and is known as a pot plant associated with winter festivals in temperate regions. Area of ​​origin is the south of Mexico and perhaps Guatemala. The largest wild populations of Mexico are in Guerrero, Oaxaca, Michoacán and Chiapas. It is occasionally found in other parts of the world. 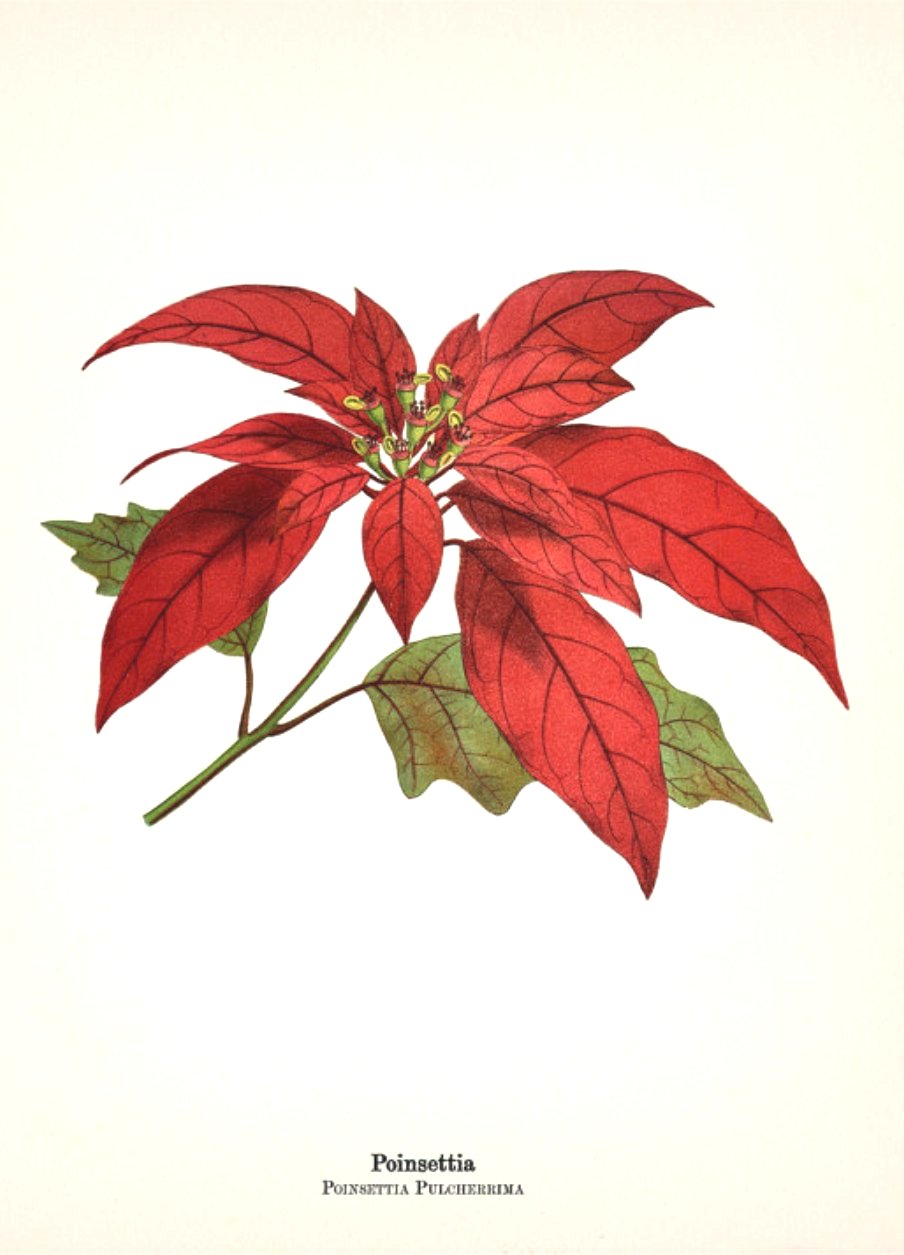 Description –
Poinsettia is a typically photoperiodic or brevidiurna plant; for this reason its flowering occurs in the middle of winter when the days are shorter. A good brightness favors a luxuriant growth but to have a good flowering the plant must stay for most of the day in the dark. It will then be placed in a place where it does not receive artificial light and in an environment illuminated by no more than eight hours of sunlight. Its most striking feature (and therefore its beauty) is undoubtedly the bloom, but, contrary to what you might think, its flower, called ciazio, with petals and sepals arranged in a cup, is not red but yellow and surrounded by a crown of five red bracts. However, there are also pink varieties (see Annette Hegg Pink, white var. Annette Hegg White and bright red var. Annette Hegg Supreme).

Cultivation –
For the cultivation of this plant, which is practiced especially in the warmer areas of the Mediterranean, a temperature between 14 and 22 ° C is required. the Christmas star can live even at lower temperatures, but can not stand the frost. It should be fertilized, in the winter period, at least every fifteen days with potassium and phosphorus fertilizers and often watered (every two or three days). In spring it should be pruned and repotted paying close attention to the stem and roots that are very delicate. Poinsettia is a typical plant of the Christmas period. Often, when it loses its leaves, not knowing well the biology of this plant, it is thrown away; instead the poinsettia does not die after a few weeks from the purchase. It should not be thrown when it fades and loses the red leaves. It is a natural process. All leaves fall the plant should be pruned leaving stems of up to 10 cm, repotted and placed outside, in a bright place but not exposed to direct sunlight.
In the period of October and November it will be necessary to keep it in the dark (or cover it with a black envelope) for at least 15 hours a day, from the afternoon to the following morning. It is precisely darkness, in fact, which favors the vegetative phase and the development of the characteristic red leaves. Attention to the latex emitted from the leaves and cut branches: it can cause irritation in the most sensitive people.
As for the reproduction of the Poinsettia this occurs in spring by cuttings (taking care to use a razor instead of a scissors, in order to avoid crushing the branch); the cut part is then placed in a glass of warm water and left to root; then invaded.
The poinsettia is a very cultivated plant in Italy (in areas with a flowering vocation), although in recent years there has been a significant decrease due to the cost of heating the greenhouses. The areas where the world is also cultivated are those of the Netherlands and the United States.

Uses and Traditions –
The Christmas star, for quite some time, has become part of the traditions of our homes during the Christmas period.
It is above all the red color of the bracts of the poinsettie that lends itself well to decorate the houses during the Christmas period, seeing that this color has become the symbol of Christmas over the years; This is because it most probably recalls the red garment of Santa Claus, and therefore the red berries of these ornamental plants have traditionally been used for the decorations of the Christmas fir and of our houses. The fact that this plant tends to flourish in autumn and winter has quickly spread its use, given the ease with which they can produce new specimens, through reproduction by cuttings.
Among the various legends, it is also said that two small Mexican children, who could not bring gifts to the crib of their town, brought simple branches of the shrubs near their house; as soon as the branches on the crib were placed, they revealed large colored flowers which embellished the entire crib.
This legend is certainly linked to the tradition of Christmas, which would see, as welcome gifts, simple trinkets, candles and colored ribbons, because it is the thought that matters and not the gift itself. In fact, as happens with most of the plants used during the holidays, what makes them the symbol of a party over time is the simple fact that during that time of year these plants are in bloom, or bring berries, or are easily available. The same European tradition in fact uses as holly plants typical of late winter holly, fir, holly, or all the plants in the forest that in this period are more beautiful and lush. Also because the presence of vegetative and colored parts compensate for the presence of cold and outdoor snow, giving heat to our homes.
It is also said that in 1825 (or 1828, the precise date is not clear) while Poinsett was ambassador to Mexico, he saw a marvelous red patch about two meters high. It was a bush of Poinsettia, although at that time, of course, it was not called this way. Poinsett imported the plant to the United States and right from the US began cultivation for ornamental purposes and the business of Poinsettia.

Preparation Mode –
In addition to its ornamental purposes, the poinsettia has no other particular uses, but since it is often kept in our homes, some precautions must be taken into account due to the fact that within its trunk and its branches there is a milky substance (latex), slightly irritating to the skin but highly toxic to dogs and cats.
The whole plant is poisonous, in particular the leaves. The intoxication can occur by contact and ingestion. The symptoms that are found in case of contact are skin irritation, erythema, itching, burning. In case of accidental ingestion, the symptoms that can be found are irritation of the mouth and of the ola, diarrhea, nausea, vomiting, loss of consciousness.
It is therefore good to know that in case of skin contact, wash with plenty of neutral soap, and if irritation persists, contact your doctor.
In case of intoxication do not induce vomiting. Even in the absence of symptoms, bring the person to the emergency room and, if the situation appears particularly serious, contact a Poison Center.
In short, not all plants can be used for food or for direct use for Man but Nature has its secrets and how it is right to think in these cases, since the Christmas Star is combined with the birth of our Lord: Man lives only in bread!