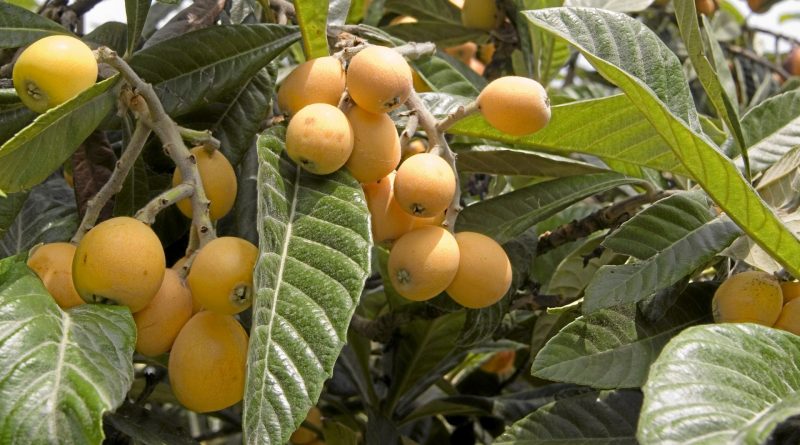 Eriobotrya japonica (Thunb. Lindl. 1821) is a tree belonging to the Rosaceae family and to the genus Eriobotrya, which is cultivated both for ornamental purposes and for its fruit mainly known as Nespola of Japan.

Systematic –
From a systematic point of view, the Nespolo of Japan belongs to the Eukaryota Domain, the Kingdom Plantae, the Tracheobionta Subordination, the Spermatophyta Super Division, the Magnoliophyta Division, the Magnoliopsida Class, the Rosales Order, the Rosaceae Family, the Subfamily Maloideae and then the Eriobotrya Genus and the Species E. japonica.

Etymology –
The name of the genus comes from the union of two Greek words: ‘erion’, wool, and ‘bótrys’, cluster, in reference to densely tomentose inflorescences. The japonica epithet comes from the Latin ‘japonicus, -a, -um’, which clearly refers to the origin of the plant.

Geographic Distribution and Habitat –
As mentioned, the Japanese gap is native to China, where the fruit takes the name of a pipe or a pipe guo, that is, the fruit of the pipe, referring to the traditional musical instrument whose form is remembered. In China there is a remarkable range of varieties in all sizes, including small fruit and less commercial interest. In Japanese the fruit is called biwa and it is here that it has received the most cultural attention already in the era prior to contact with Europe, with the selection of different varieties that are usually bigger than the wild Chinese ones. The latter are usually more compact pulp, while Japanese ones are more watery pulp.
Japan’s Nespolo is a thermophilic plant, cultivated in gardens, parks and gardens in temperate-warm climate because it can not withstand prolonged gels. It grows between 0 and 600 m s.l.m. 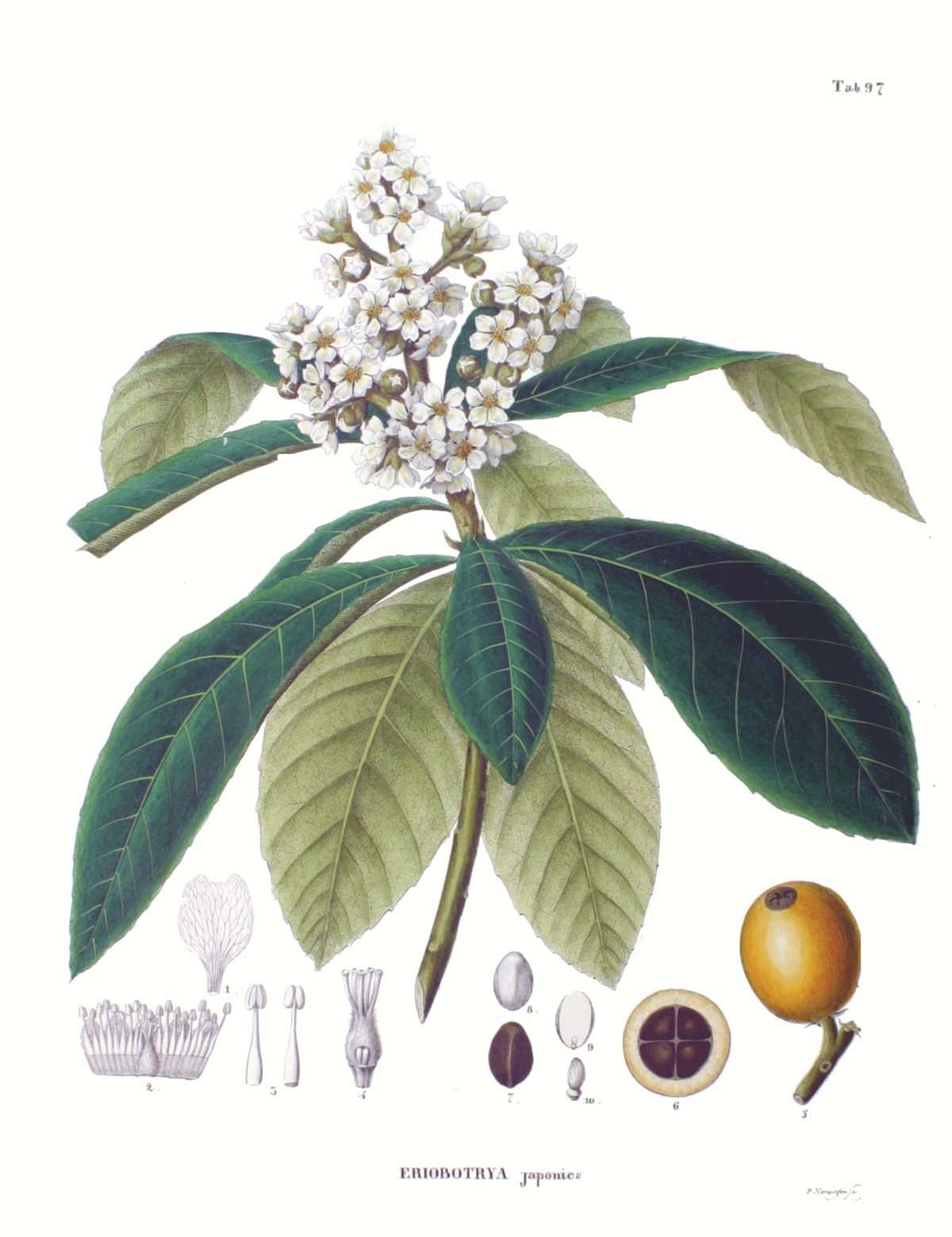 Description –
Japan’s gap is a medium-sized tree, hardly pushed up to 8-10 feet tall and equally wide. It is usually cultivated in smaller dimensions. The tree is dewy and evergreen with leaves very large (length up to 25 cm, width up to 10 cm), very solid, cardboard-like texture with a red-backed green glossy surface, while the reverse are pale green , whitish and very hairy. Hairiness refers to all the young and not lignificated parts of the plant. The fruits of Japan’s junk are light yellow, yellow or orange poms, and are immediately edible. They contain one, two three or four large seeds which are by weight a considerable part of the fruit. Their ripening takes place in May-June, while the flowering takes place in the period between December Easter.
The cultivars of this plant often cover local character and are distinguished by color and shape. Among the most interesting ones we can list: Mogi, coming from Japan, Tanaka, Early Red, California, Champagne, Palermo early, Red Giant of Ciaculli, Giant Nespolone of Trabia, Santa Rosalia Conca d’oro, Monreale, Precoce Special, Nespolone white, Pink Nespolone, Red Nespola of Ficarazzi, Trabia, Pelosetta, Vanilla, Verticchiara, Nespola of Ferdinando. But remember that variability and hybrids are innumerable.

Uses and Traditions –
The fruit of Japan’s Nespolo began spreading in Europe at the beginning of 1800, the first specimen being implanted in the Botanical Gardens of Paris in 1784 and later at Kew Gardens in London in 1787. Originally planted in eastern China, naturalized in Japan for about a millennium, was introduced to Europe at the end of the 18th century for ornamental purposes and for its edible fruits. Important crops for fruit production occur mainly in Spain (Alicante) and Italy (Sicily). In fact, it is naturally naturalized in much of the territory.
In our culture, we have always talked about: “With time and with straw the ripeness grows,” says a proverb (although the saying is also used in the form: “With time and with straw matures sorbe”) .
We have seen how common misunderstanding was once considered a genuine burst of trouble for farm houses. Probably also affected his ability to spell the seasons, as he was the first to flourish and the last to ripen his fruits. But anyone who has read The Malavoglia of Giovanni Verga will now be asked: The House of the Disappearance of the Unfortunate Family of Aci Trezza, owes its name to a common disadvantage or a Japanese gap? The debate between botanical and literature enthusiasts is very much appreciated. We know for sure that Japanese junk, after coming to France in 1784, started to be cultivated successfully in Campania and Sicily a few years later. However, it is unlikely that Japan’s Japanese mosquito was to be cultivated in a humble fisherman’s house during the 1960s (Malavoglia’s setting period). It could appear, at most, in some aristocratic garden. Some steps of the Malavoglia leave instead thinking of the common European gap, both because of its somewhat symbolic role – the jubilee should bring luck, but the family will almost only come to misfortune – similar to that of the unlucky Providence ship. Both for the steps in which Verga seems to emphasize the role of the gap as a tree that marks the seasons. “The gap was still raging, slow, and the daisies of daisies, now pins, were still hanging on the door and the windows, as they had put them in Easter Rose.” Let us dictate our nespole but remember that they are the fruits of that aristocratic tree imported from Japan, and not that other wise and secular guardian of farm houses.
Among the properties and peculiarities of the Nespolo we remember that this is a melliferous plant, although it is only in areas of the south where flowering is allowed by the mild climate, being in December-January and also bees must have temperatures not too rigid that allows to go out and boil during flowering. It can be said that for the bees Japan’s Swamp plays an important role: it provides the ultimate nourishment before the cold winter. Japan’s fragrant flowers are very fragrant, the scent is similar to that of hawthorn; the flowers are so sought after by bees that are looking for nectar and fresh pollen, since during the flowering period of the Japan gap, to satisfy the few bees or bumble bees there are very few flowers. It is also used as an ornamental tree in gardens and parks.
Japan’s honey honey is particularly appreciated in Sicily and Alicante (Spain).
The fruits are edible and generally eaten fresh, have a delicate and refreshing succulent flesh, contain many vitamins (A, B, C) important mineral salts (calcium, potassium, magnesium, etc.). They can also be used for the preparation of jams, juices, syrups and alcoholic beverages.
The fruits of the Nespolo of Japan (which are more or less sweet depending on the degree of maturation and variety) have many beneficial properties: rich in mineral salts, which make them ideal for athletes and for those who practice prolonged physical activity, have properties anti-inflammatory and diuretic, help bowel and hepatic regularity, are mildly antipyretic, have laxative properties when mature or astringent, so useful in case of diarrhea, if acute. Hypodermic, protect against colon cancer, reduce the risk of developing cardiovascular disease, improve blood pressure, reduce blood cholesterol levels, help improve vision, counteract the harmful effects of free radicals through their antioxidant action.
Leaves are also expectorant and mucolytic, so their extract, in phytotherapy, is used in the treatment of cough or as a mouthwash. The same leaves, in cosmetics, are used to produce anti-inflammatory and anti-redness creams for the skin. How to conserve Japanese goblins? Those aubergines, at room temperature, for up to 4 days, while those aged in refrigerator for up to 3 days. You can consume them in the natural, macedonia with little honey and lemon or pieces, in lean yogurt for a good spring breakfast. They are great in the preparation of sweets, smoothies, sorbets, semifreddi, jams and liqueurs.

Preparation Method –
Many are therefore using not only fruits but parts of Nespolo’s plant. Here, however, we limit ourselves to mention two recipes.
Nespole cake: Heat 15 g of sugar with 60 g of water; at the first boil, add 3 g of elderberry flowers, remove the casserole from the fire, cover with the film and cool. Heat an empty casserole on medium heat, pour 40 grams of sugar, little by little, mixing to prevent it from burning: it will have to be barely soaked. When the sugar is dissolved (it will take about 5 minutes), remove from the fire and combine 1/4 of lemon juice, little at a time, and mix well, obtaining a caramel. Lined with baking paper with a pie (ø 22 cm), then pour the caramel and level it well on the bottom. Peel the raspberries (if you like, you can replace them with apricots), open it in half and peel the hazelnut, then spread it over the caramel, with the concave part facing upwards. Then mix 3 yolks with 80 g of sugar using a whip, then incorporate the infusion into the elder, after filtering it, almond flour, flour 00, melted butter and a little grated lemon zest; mix the mixture well for a few minutes. Lay the snowballs in the snow and incorporate them gently into the compound, then spread over the rough and leveled ones. Bake in a ventilated oven at 180 ° C for about 35 minutes. Pour the cake, let it cool and pour it over to slicing it, helping with another dish. Decorate the surface of the cake with some chopped almonds, fresh egg whites and elderberry flowers as you like.
Cheesecake of blackberries and blackberries: for the recipe of black and white cheese cheesecake, smooth the amaretti finely, then combine 120 g of melted butter, 15 g of millefiori honey and a pinch of cinnamon powder. Mix to obtain a sandy compound which, if pressed, retains the given shape. Fill and flake a hollow mold (ø 18 cm, h 8 cm) and litter it with the sandy blend of almonds covering the bottom and edges. Put it in the fridge as you prepare the rest. prepare the dough mixing the robiola, fresh cheese, flour, eggs, yogurt, 100 g of sugar, grated garlic of a lemon and unmade cream. Pour the mold into the mold just removed from the fridge and bake at 170 ° C for 35 minutes. Sprinkle the cheesecake and allow it to cool down for 3 hours. Peel and peel the hazelnuts of the hazelnut, divide them in half, put them in a pan with 50 g of jam and 200 g of sugar and cook on the average flame for 7-8 minutes. Serve the cheesecake by completing it with the nespole to the liqueur.