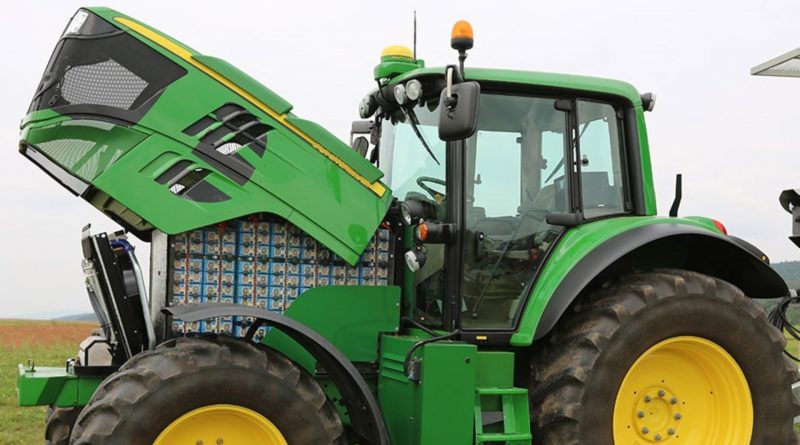 The world of agriculture, with all of its (cultural and structural) crises, is certainly the sector that will receive the greatest impulses of ideas and innovations in the coming years.
So the goal of achieving agricultural activity even to positive emissions will be the challenge of not only the agronomic but also the technology associated with it.
Thus developing sustainable non-polluting systems is the challenge that the agricultural sector faces to make companies more and more virtuous through the adoption of green tools that can carry forward production without harming the ecosystem.
That is why for some years now we talk about (and research in the scientific field) of the fundamental role of electric traction tractors (and machinery).
This type of machinery is marking an alternative to traditional means of work and will revolutionize the agricultural sector, making it reach a total energy autonomy respecting the environment.
Technology is fairly simple in its principles. Self-propelled vehicles are equipped with an electric motor that uses the energy accumulated in one or more rechargeable batteries. In addition, during the braking, the electric tractor engine produces energy transforming itself into a dynamo and sends it to the batteries that drive the vehicle: in this way energy is not wasted, indeed a circle is created through which the braking heat will feed the engine. This results in lower consumption and greater autonomy.
Compared to internal combustion engines that are commonly used today in agriculture, battery motors have significantly higher power efficiency. This is how the electric motor goes with a 90% efficiency – thanks to the reduction of internal frictions – to the diesel engine that reaches a 40% efficiency and the petrol engine ch even decreases by 25/28 %. The numbers are unmistakable.
Since this world is constantly evolving, vehicles are also being studied to fit a photovoltaic system to the electric one so that it can be recharged even when the vehicle is in operation.
Evidently the way to go is so. Meanwhile, we see today, what are the advantages and disadvantages of the electric tractor.
Already described, the advantages of using an electric tractor are obvious. Among all, it is possible to reduce energy consumption in a saving and safeguard environment that, due to the emissions produced by the old production systems, is greatly compromised. Following this line, the electric traction motor allows:

lower the noise pollution;
to maintain good air quality, due to the fact that these means do not emit fumes. This point is important because electric tractors can be used even in the presence of greenhouses in the context of cooperation between companies;
decrease the weight of vehicles;
associate this technology with photovoltaic systems, mini winds and cogeneration systems.
As far as the disadvantages are concerned, these are to be attributed at an even higher cost and less autonomy than traditional farming vehicles, so until such issues can be resolved this could be a disadvantage and could push the agricultural entrepreneur not to adopt the electric tools for work in the fields.
Some researchers are currently studying conversion kits to solve the problem of the high cost of electric tractors.
This would not lead to the creation of new vehicles, but to a substantial conversion of the means already owned by farmers. In this way, in addition to the costs, it will also be possible to reduce the resumption of work time. This concept of reuse is very expensive for sustainable philosophy: the means of work has a second chance of life, a green possibility that could also serve as an example for urban mobility with a strong propensity to ecology.
This will almost certainly lead to activities, services and workshops that will develop in this area and new “professions”.
So the date of 2020 is not far enough, but the progress that is being made in research and in some pilot companies is a good hope for this first goal.
In short, rethinking the economy in a sustainable way is certainly the way to go if we want to give our country more growth potential.
To do this, however, the Politics must come out of the illusion of great investments and great achievements. Nature works for small cells that aggregate also form the most majestic trees you can admire.