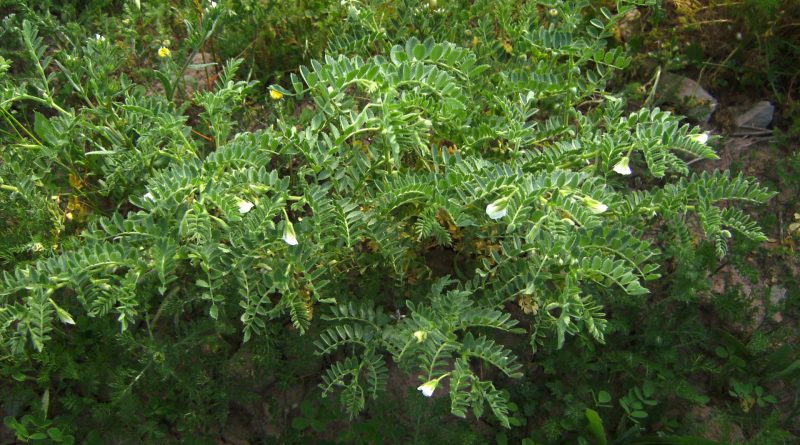 Chickpeas (Cicer arietinum L.) are a herbaceous plant belonging to the Fabaceae family. The seeds of this plant, that is chickpeas, are widely spread and widely used legumes in human nutrition.

Systematic –
From a systematic point of view Cece belongs to the Eukaryota Domain, the Kingdom Plantae, the Magnoliophyta Division, the Magnoliopsida Class, the Fabales Order, the Fabaceae Family, the Faboideae Subfamily, the Cicereae Tribes and then the Genera Cicer and the Species C. arietinum.

Etymology –
According to some authors, the name of the genus Cicer from Latin and in reference to Cicero. It is well-known that Cicero’s surname was descended from an ancestor who had a characteristic wart-like chin on the nose. But this origin does not seem to be true.
The arietinum specific name refers instead to the resemblance that the seeds have with the profile of the head of a ram.

Geographic Distribution and Habitat –
The genus Cicer is spontaneous plants in the warm regions of the Old World, with particular presence in arid or semiarid climates. Most species are concentrated in central and western Asia. In the European continent, the genus Cicer is spontaneous only in the Balkan Peninsula. The region of origin is Western Asia from which it has spread to India, Africa and Europe in very remote times. 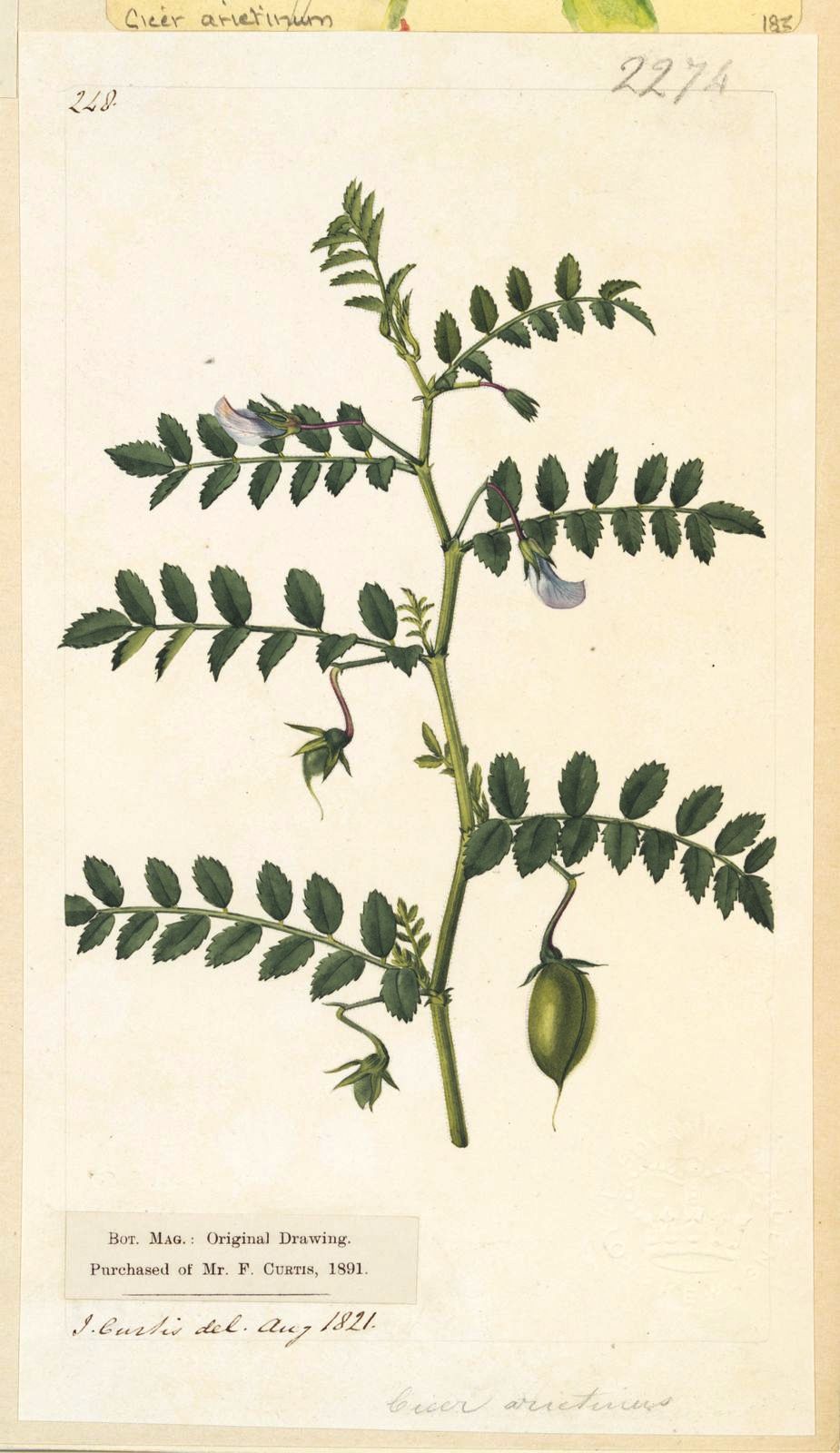 Description –
Cece is an annual plant; has a deep branched root that in some cases can even reach 1.20 m; for this reason the plant manifests an average drought resistance. The stems are branched, erect and hairy with a height varying between 40 and 80 cm. The leaves, as in all legumes, are opposed and consist of 6-7 pairs of elliptical and denticolular leaves; flowers can be white, roses or red; the seeds are round, smooth or wrinkled and edible.
Despite the large diffusion of chickpeas, the varietal landscape of this plant is not very rich, as in general the local populations are cultivated. This is because the genetic improvement of this plant has been undertaken for some time. Among the main goals pursued by the selection are: resistance to the main adversity and especially anger; cold resistance, to extend the autumn sowing; change the plant’s bearing from the normal semiprostrate type to a tall, erect, concentrated flowering or the first wells well spaced from the ground, so that mechanical harvesting is possible.
Among the cultivars (though not yet recognized from the point of view of varietal stability) we recall: D’Agrigento, Cicero, Cairo, Carrusaro, Corilan, Prince, Royal, Sorano, Ares, Sultan, Volcano, Etna and Pasha.
In terms of varieties a quote is a part of the black chestnut that has been cultivated for ever above all on the karst murgia, the southern part of the Murge baresi which includes the municipalities of Acquaviva delle Fonti, Cassano delle Murge and Santeramo in Colle. It is so important for local farming that has become Presidio Slow Food and the protection of Regio Puglia with the brand “Quality Products of Apulia”.

Cultivation –
For the cultivation read the following card.

Uses and Traditions –
Chickpeas, thanks to their high nutritional power, have been among the first foods consumed by humans since ancient times, and today they represent the third beefy legume, after soybean and bean.
It was one of the first domesticated crops; the cultivated chickpeas comes from wild forms of the genus Cicer, probably from Cicer reticulatum. Wild species originated probably in Turkey, while the first archaeological evidence of chickpea cultivation dates back to the Bronze Age and was found in Iraq; chickpeas spread throughout the ancient world: ancient Egypt, ancient Greece, Roman Empire.
Horace points out that in the Romans’ thought a highly appreciated gastronomic preparation was that of chickpeas fried in olive oil.
In the ancient world, chickpeas were attributed to aphrodisiac virtues, as well as nutritional value, probably due to the intestinal tenderness caused. Pliny writes that those candids called “chickpeas of Venus” (colombina genus) were offered and consumed in ritual veggies. Just during some of these women’s meetings, “Pervigilia Veneris”, presumed to be celebrated as orchestral rites with the ingestion of rejuvenating foods such as chickpeas. Galen also attributes aphrodisiac qualities to these herbaceous plants: “Chickpeas cause coitus and generate a lot of sperm where some feed them to stallions.” These legumes were of great value also in the marine industry. In sailing ships, whose outer frame was fastened to nails with nails, with the passage of time and with the stresses on the hull, the heads of the nails jumped and there was a bucket that allowed the sea to penetrate; he was remedying this problem by throwing a chickpea in the crease. The chickpeas with the water swelled and prevented the access of the same. So when the ship was old, the commanders embarked on a sack of chickpeas that would make misfortune to sailors.
The “Vespers of Sicily”, the popular revolt which broke out in Palermo in 1282, was also linked to the end of the Angioino rule. The word chickpeas (chickpeas) was pronounced to those who were suspected of being French, and if the accent fell into the “i” finale, it was assumed to be a stranger to sword.
In addition to human food, chick peas (especially scraps and by-products) are used as supplements for animal feed.

Preparation Method –
Among the many preparation of chickpeas we are spoiled for choice, just to mention alucne we remember:
Pasta and Chickpeas is a unique, nutritious, traditional dish perfect to survive the first cold. This dish can be served in a thousand different varieties: with tomatoes or without, with a lot of broth or slightly dry.
The Chocolate Huskum recipe, the world-known sauce, and also called Houmous, Hommus, and Humus has ancient origins and is spread throughout the Middle East and the Mediterranean, especially among the eastern regions.
The recipe for falafel, or felafel, is originally from the Middle East, a preparation of Arabic cuisine, with which are made fantastic chickpea vegetarian meatballs, with the addition of spices and herbs.
Chicken chicken soup, a taditional dish revisited with the addition of aromatic herbs to the unmistakable scent.
Chickpeas with rosemary are a great aperitif but also a side dish. Plain simple, fast and cheap.
The chickpea recipe offers you the ability to prepare something multifaceted, which you can consume as a first dish or a unique vegetarian dish, a kind of soup, or if cooked more dry, these chickpeas can also be a side dish.
Pumpkin soup and chickpeas is a delicious recipe with a really simple preparation. Ideal for autumn, also to create a completely dedicated pumpkin menu, the main ingredient of the season.
Then there are so many varieties of cold dishes and chickpea salads and last but certainly more characteristic the famous panels.
Pancakes are chickpea flakes, typical street food (or modernly street food) of Palermo cuisine. Panels are served mainly in the midst of mafalda – baking forms of about 200 grams with the crust covered with sesame seeds (in Palermo called “cimino, gigiolena or giuggiulena”). They are often eaten together with “crocché” (from French “croquettes”, potato croquettes) or with other fried pasta dishes, and seasoned with salt and lemon. Another typical approach is the panella, crocache and fried eggplant. The panels represent the characteristic snack of Palermo: they can be bought in many places in the city, especially in the “friggitorie”, also in the streets, in the streets of Palermo.
But if you have never tasted it, you can not even imagine it.