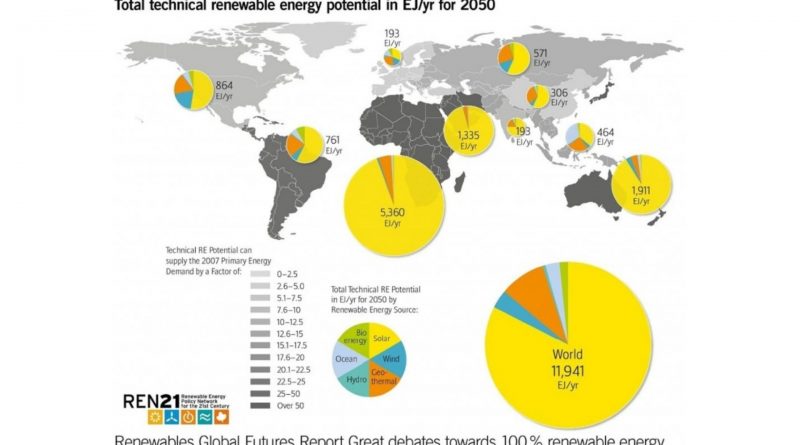 That you will have to get strength to a future where the energies used will be entirely of renewable nature is out of the question. As it seems more complex, however, during the Sustainable Energy for All Forum held in New York, the data that the multi-stakeholder network REN21 published, “Renewables Global Futures Report 2017” a chance to reach a 100% renewable energy future and the challenges that we need to face in order to succeed. The report analyzes views of 114 energy experts from every region of the world. This report presents a wide range of expert opinions and is designed to stimulate debate and debate on opportunities and challenges to reach a 100% renewable energy future by the middle of the century. This report tells us how the goal is not impossible but governments need to adopt the right financial policies and incentives to speed up the pace of its implementation.

Most experts agree that renewable energy technologies serve to lower the barriers that prevent poorer communities from accessing energy services. It is estimated that, at present, about 100 million people receive electricity through distributed renewable energy systems and the markets of these systems are growing rapidly.
Among the experts there is a huge consensus that renewable energy will prevail in the future and many will point out that multinationals are increasingly choosing renewable energy products either by purchasing them from energy utilities or with direct investment to produce energy renewable. There are already many companies, regions, islands and cities that already consume 100% of renewable energy have programs to reach this goal quickly.
For this reason, and for an obvious market law, it is expected that the cost of renewable energy will continue to decline, becoming cheaper than all fossil fuels within 10 years, because, in most OECD countries, wind and solar energy are already competitive with fossil fuels and countries such as China and Denmark are demonstrating that GDP growth can be decoupled from rising energy consumption.
There are obviously no difficulties and challenges to be tackled: in particular, with regard to Africa, the United States and Japan, experts are skeptical that they can achieve 100% renewable energy by 2050, a delay largely due to the interests of the conventional energy industry that exploits the weakness of public governance in Africa and which heavily influences economic policy in Japan (nuclear) and in the US.
However, the measures to be taken to achieve “renewable autonomy” include transport: from road to rail transport.
To hinder the development of renewable sources and energy efficiency in many countries will also be the lack of long-term political certainty and the lack of a stable climate for investment.
The fact that it nevertheless becomes comforting is how the prospects for renewables are changing also from a cultural and consensual point of view. When it comes to talking about renewable energies, no one could have imagined that in 2016 China would become the world’s renewable energy power station and that more than half of global renewable energy investments would take place in emerging and developing economies . In the 1990s, appeals for 100% of renewable energies were not taken seriously, today the world’s leading energy experts are engaged in rational discussions on its feasibility and in what time.
History often denies our pessimism, but History does not allow sleeping on the laurels and, above all, does not allow policy makers of the future not to deal (among the many emergencies) of this theme of utmost importance for the Planet and for social stability and politics of its inhabitants.