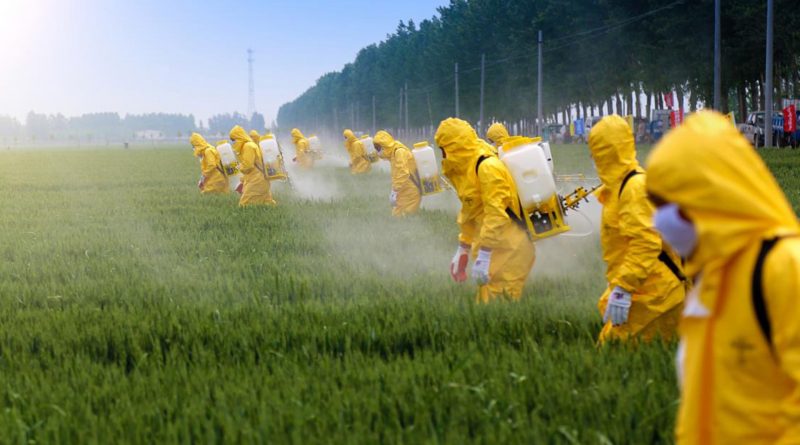 As pointed out in other parts of this portal, I want to emphasize the role and functioning that pesticides play on the balance of life and hence on human and social equilibrium.
We all know that pesticides are man-made chemicals and intentionally released into the environment to kill or harm other living organisms. The whole family of pesticides is identified by the “cida” (herbicide, fungicide, etc.) suffix, derived from the Latin “cœdere”, meaning “killing” or “killing”. Therefore, pesticides, according to etymology, are “pest” killers (from Latin “pestis” indicating a scourge or a contagious disease).
This is one of the reasons why in the industrial environment and multinationals, it is carefully avoided to talk about pesticides, preferring the term plant protection products, or even more sweetened, phyto-pharmaceutical products, which is not just a semantic prestige game that reassures but it has the fundamental aim of deceiving both farmers and consumers.

Most farmers and even more consumers disavow the principles and dynamics of these molecules, and a media campaign that has been specially implemented has in fact diminished the devastating effects that these active principles play with respect to the ecosystem and therefore the ‘Man.
Pesticides, though used by antiquity but with very simple molecules, knew a first leap forward with the inorganic chemistry of the nineteenth century. But the Great War is expected to be the basis for their mass production, thanks to the development of organic chemistry and research on war gases.
Not everyone knows that the historical origin of pesticides and chemotherapists is intimately linked to the chemical war, whose paternity is attributed to German chemist Fritz Haber, whose work on the process of fixing atmospheric nitrogen, will serve to produce famous nitrogen fertilizers, but also explosives. With the beginning of the First World War, Haber is head of the prestigious Kaiser Wilhelm Institute in Berlin, and his laboratory is urged to participate in the war effort. His “mission” will be to develop irritating gases to detain enemy soldiers from the trenches, and this is in the shadow of the 1899 Declaration of the Hague that prohibits the use of chemical weapons. Among the gases studied, only one emerges for useful features: the chlorine, extremely toxic, characterized by a suffocating smell that penetrates the airways violently. On April 22, 1915, the German army discharged 146 tonnes of chlorine gas (dichloro or chlorine dioxide) to Ypres in Belgium: the French, British and Canadian troops dropped like flies in trying to protect the airways with trivial handkerchiefs.
This was the first use of pesticides with the difference that the targets were not insects or mushrooms but men.
Meanwhile the Allies had learned to use antigas masks, so chlorine compounds were no longer a problem. Thus the Germans developed phosgene, consisting of a mixture of dichloro and carbon monoxide. Less irritating to the nose and throat of chlorine itself, but representing the most lethal chemical weapon prepared in Berlin, as it attacks violently the lungs filling them with hydrochloric acid.
Few know that this chemical weapon, phosgene, continues to be widely used as a pesticide compound and is one of the components of the “sevin”, the insecticide that is the origin of the Bhopal environmental and humanitarian disaster of December 1984. Towards the end of the war, when gas casualties count to tens of thousands, the latest rediscovery is launched, the mustard gas, also known as “iprite”, named after the place where it has been experimented, such as gas chlorine: Ypres trenches in Belgium. The effects of mustard gas are terrible: it causes huge blisters on the skin, burns the cornea causing permanent blindness and attacks the bone marrow causing leukemia. Just the destruction of the marrow, will give the starting point for great medical research to develop the leading product of oncology: chemotherapy.
A new report by the American Cancer Society has released an alarming revelation: death rates for liver cancer have doubled in the US (and also in Europe) since the mid-1980s. Identical is alarming data for other types of judge and for Alzheimer’s disease.

Fritz Haber, after the armistice, was listed on the list of war criminals and hence flew to Switzerland until 1920, and this is horrible, he even received the Nobel Prize for Chemistry. The irony of the fate is that Fritz Haber was a Jew, and he was also the inventor of Zyclon-B, the gas used in concentration camps. He dies on January 29, 1934 and will never know that a part of his family will die asphyxiated by the gas he himself invented. While developing these terrible weapons, he also devoted himself to comparing the toxicity of gases by formulating a law that would allow them to evaluate their efficacy, that is, their lethal power. This law, still used today, has taken its name “Haber’s Law,” and expresses the relationship between the concentration of a gas and the time of exposure necessary to cause the death of a living being. The “Haber law” also directly inspired the creation of one of the most cruel, morally-and more absurd, scientific tools for the evaluation and management of chemical hazards: the “Lose Dose 50” or simply DL-50. This paradoxical toxicity indicator measures the amount of chemical needed to exterminate half of the animals used in the laboratories.
Let us remember then and always that when we drive in the environment these active principles are passing through death and you know why? Because an ad hoc culture has erased in modern farmers those laws and rules of knowledge of ecology through which the use of pesticides would prove useless.
At the end of the 1980s, some of the professors at the Istituto di Entomologia Agraria of the University of Palermo, together with my undersigned, had developed biological control techniques for some parasites of agricultural production and showed that with the clever use of rotation and fertilizers reduced the use of pesticides to zero.
The result was that instead of receiving the Nobel Prize, the CNR closed the Search.
Even smaller are those who know that pesticides and herbicides accumulate in the endocrine glands, which, being fat rich, are the preferred target of chemicals; they accumulate and remain in these organs for years, causing hormonal imbalances that affect the entire body. For example, the pancreas imbalance (one of the endocrine glands) can cause diabetic disturbances, while the adrenal gland imbalance, which regulates the vitality of the body with their hormones, causes symptoms such as: tiredness, poor adaptability to stressful situations, tension. Also the reproductive glands, testicles and ovaries, rich in lipids, favor the concentration of pesticides with a drastic decrease in the fertility of men and women.
Accumulation of pesticides in the ovaries can cause ovarian cysts and menstrual cycle changes in women. Even the liver, the kidneys and the nervous system are home to pesticide build-ups that, over time, cause irreparable damage. After the study on pesticides and herbicides, Larc (Lyon International Agency for Research on Cancer) concluded that many of them are carcinogenic. They can also cause variations in the embryo or the fetus and inheritance characters of the individual. Organophosphorus and formaldehyde compounds can cause allergic diseases, especially early childhood (rhinitis, conjunctivitis, dermatitis and bronchial asthma are the most common symptoms of allergies), which are significantly increasing in recent years due to the massive presence of pesticides in foods. The problem of violence in schoolchildren seems to be linked, in addition to family or lifestyle factors, to the action of pesticides on the endocrine glands, particularly the thyroid gland.
There is legislation regulating the “maximum permitted dose” of pesticide residues in foods, established according to the principle that, for each toxic substance, it is possible to establish an amount that does not harm the organism. This principle has no scientific basis because it does not take into account the long-term effects of pesticides or the phenomenon of accumulation of toxic substances in organs, which produces not always predictable effects.
And yet, reassuring indications of pesticide products and tolerance thresholds are fueling farmers and consumers in the belief that everything is necessary and not harmful.
Instead, we are causing the corruption of Life with short, medium and long term effects of inestimable dimensions.
Meanwhile too many Scientists and Politicians sleep quietly without knowing that they and their family are the first victims of this war without distinction of class and race.
We are all children of the greatest deception of modern times.