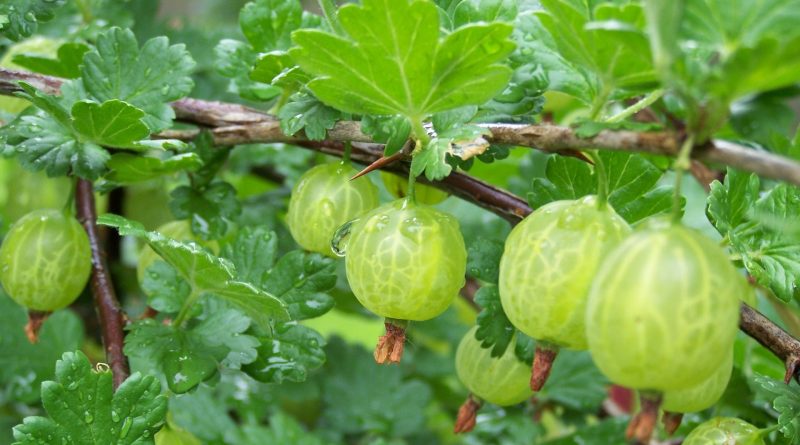 The spinach (Ribes uva-crispa L.) is a plant of the Grossulariaceae family and belongs to the genus Ribes. Another scientific synonym for this species is Ribes grossularia.

Systematic –
The grape from the systematic point of view belongs to the Eukaryota Domain, the Kingdom Plantae, the Magnoliophyta Division, the Magnoliopsida Class, the Rosales Order, the Grossulariaceae Family and then the Genera Ribes and the R. uva-crispa Species.

Etymology –
The name of the genus of this plant comes from the medieval Latin ‘currant’, which in turn goes back to ‘ribas’ Arabic, which is the name of an acidic plant mentioned by Arab doctors. This term is missing in Greek-Roman literature and appears for the first time in 1290 in the writings of Simon Januensis, lexicographer and Italian physician. The specific term derives from the Latin ‘grapes’ and ‘crispus, -a, -um’, rippled, curly, with reference to the characteristics of the fruits that are loose and glandular.

Geographic Distribution and Habitat –
The spinach is an Eurasian plant with a wide diffusion area; Is spread from Europe to Japan. In Italy it is common in the Alps and in the central-northern Apennines, up to Molise. It grows predominantly in the forests and mountain ranges, ranging from 100 to 1,600 m.

Description –
The spinach is a small thorny shrub, leafy leafy and fallow leaf. The branches of this plant are quite intricate. The plant can be between 50 and 200 cm in height. Its biological form is that of a nano-faneroid; In fact it is a woody plant with perennial gems set between 20 cm and 2 m from the ground. Leaves are lobed, with no stipulations, of varying hairiness. The flowers are lonely or with a raceme of 2-3 flowers and with a short peduncle. The chalice consists of five yellow-green, yellow or purple sepals, of 5-7 mm. The corolla is formed by five smaller petals of the sepals, alternating with them. The flower has 5 epipetal stamens (arranged in correspondence with the petals). The ovary is inferior, with a twin-beam stylus. The flowering of the grape shoot occurs in April and the fruit is in August. Flowers, either individually or in groups of 2-3, are generally self-fertilized. The fruit is a berry with many seeds, with varying sizes, colors and variability. Usually the diameter can vary from 10 to 25 mm in species and the colors of light green and violet acid to yellowish and pale red.
Among the various types of Uva Spina there are some red or red fruits, among which there are the Poorman, of American origin, with not very large fruits and used in the syrup fruit industry, or Winham Industry. This red spina is English, its berries are oblong and of large size, the color tends to purple just like those of the Josta type, diffused in Holland and very vigorous.
One of the peculiar characteristics of red plugs is high sensitivity to oge, so cultivating in areas where humidity and climatic conditions may be subject to this mushroom is not recommended. The other color of the berries of this plant is white. It is not just white but greenish, yellowish, and various similar nuances. There is, for example, Careless Spinach, from England, with big green berries, White Smith, always English but with more yellow fruits, and the Leveller, similarly English and “yellow”.
A white variety and highly appreciated because the more resistant to the others is the Pax, without thorns and with a fruit of good taste. In general, among the various cultivars of Uva Spina, the European ones are more sensitive to the ozone and less rustic than the American, they come from different parts of the world and adapt to our climate.
Commonly known as Amla, scientifically defined as Phyllanthus Emblica L., Indian spinach has antiviral and antimicrobial properties as well as beneficial nutritional effects. You can read it thoroughly in the dedicated article: “Amla: property”.

Cultivation –
Gooseberries have been cultivated since 1700; the first official news comes from England; therefore it seems that from this island it then spread to the rest of Europe, with the various species of selected cultivars. Of all the countries, the one that most appreciated this plant was Germany.
For the cultivation technique, see the following sheet.

Uses and Traditions –
The cultivation of the spinach dates back to 1700; From England the selected cultivars soon spread to other European countries, especially in Germany.
This species is commonly cultivated in numerous vegetable varieties for edible berries that have a pleasant and aromatic taste and are refreshing, diuretic, laxative and remineralizing. They contain vitamin C, pectin, sugars, mucilages, tannins and mineral salts.
The spinach has a diuretic and laxative action. The popular tradition advises the sufferers of rheumatic and gout pains
The pulp is used in facial masks for the cleansing effect on oily skin.
Berries are consumed either as fresh fruit or prepared in soft drinks, syrups, jams or jelly. Through fermentation a special fruit wine is obtained.
Non-ripe fruits can be used as seasoning in fish dishes, from which the French name is: groseillier à maquereau (mackerel).
In Trentino is particularly popular the spinach-based jam called “conserves the spinach”.
Even if the spinach is a plant that “belongs” to colder climates it is also true that, with special arrangements, it can grow in our rooms taking into account its water needs and shading when the conditions of insolation are excessive.

Methods of Preparation –
One of the uses and motives of cultivating the plug is related to the production of jams. We find the fruits also sold fresh but are not always appreciated, while they come to greater approval if treated and canned or as the main ingredient of jelly and macedonie.
It is a matter of taste, sweetness, but also of the properties that these berries have: it is proven that they perform a diuretic and laxative action, gentle but which can serve for those suffering from mild constipation. In addition, juice is used for gargarism in the case of inflammation of the oral cavity, there is also the underground legend all to be verified, that the Spinach is a remedy for rheumatic pain and gout.
With regard to the recipes of Uva spina, they are mainly of sweets, which are the protagonist of the Uva Spina. We see a pie of Uva spina. As ingredients, in addition to 600 grams of spinach, serve flour, butter, sugar, aniseed liqueur, 4 eggs, 3 dl cream and dried biscuits. Begin assembling 200 g of flour with 150 g of butter, adding 50 g of sugar, 2 yolks, 3 small glasses of liqueur. When a soft paste is obtained, put it in a refrigerator for 30 minutes then spread it in circular form and lined with it a well-prepared buttered preparation and sprinkled with biscuits crumbs. Arrange the edges, folding them, and biting the bottom, shoot again, but above, crumbled cookies and roasted turkey first washed and marinated with liqueur. Cooking at 200 ° can last about 20 minutes while passing this time we prepare a cream with beaten eggs, 75 g sugar and cream, and pour over the cake piece extracted from the oven and then put everything back to cook for 20 minutes at 190 °.
Another interesting preparation is that of spinach jam: with this recipe, preparing a particular jam without pectin has never been so easy!
Ingredients are: Grape noodles 800 g, Red currant juice 150 g, Sugar 500 g. The preparation time is 15 m, the cooking time is 10 m.
For preparation: wash the spinach, clean it, put it in a large pan and crush it with a pestle. Pour the redcurrant juice and bring to boiling, add it by mixing the gelling sugar and cook over high flame for about 2-3 minutes stirring continuously, then pull the pan out of the stove. Test the pot, pour one teaspoon of the hot mass on a saucer, place it for 2-3 minutes in the fridge, if the mass does not thick enough, put the pan on the fire and let it boil. Fill the prepared jars (clean with hot water and then dry them well) with the hot fruit, close immediately, turn the jars over them and put them back for about 10 minutes. Then turn and cool completely.