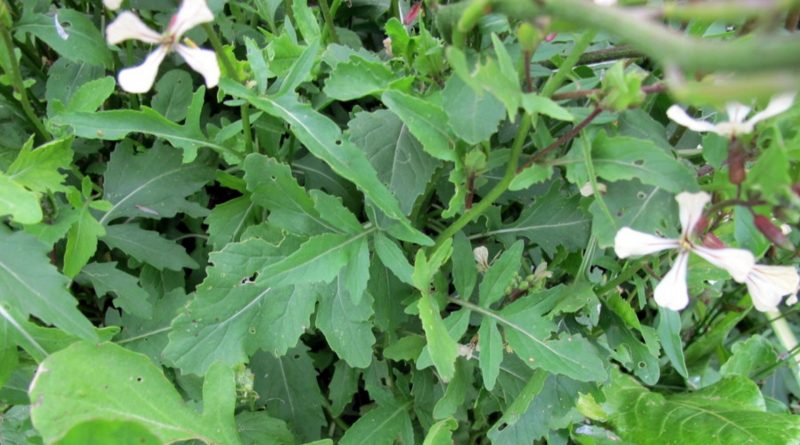 The ruchet (or rughetta in some regions) or rocket, or even ruca (Eruca vesicaria (L.) Cav.), Is an annual herbaceous plant belonging to the Brassicaceae family (Cruciferae).

Etymology –
The name of this genus derives from lat. ‘Erùca’, that is, caterpillar, which may in turn come from an ancient word Rùga (spanish oruga), named after a green caterpillar that ciba of the species of the brassicacee family, probably the pieride of cabbages. The specific term derives from the Latin vesicarius, -a, -um (vesicular) bladder, probably referring to the diuretic properties of this species.

Geographic Distribution and Habitat –
The rocket is native to a rather large area ranging from the Mediterranean basin to Central-West Asia. It is still a species that fits well to many climates and is now also grown in other parts of the world. Its natural habitat is up to 800 m s.l.m., in fertile and sandy soils. 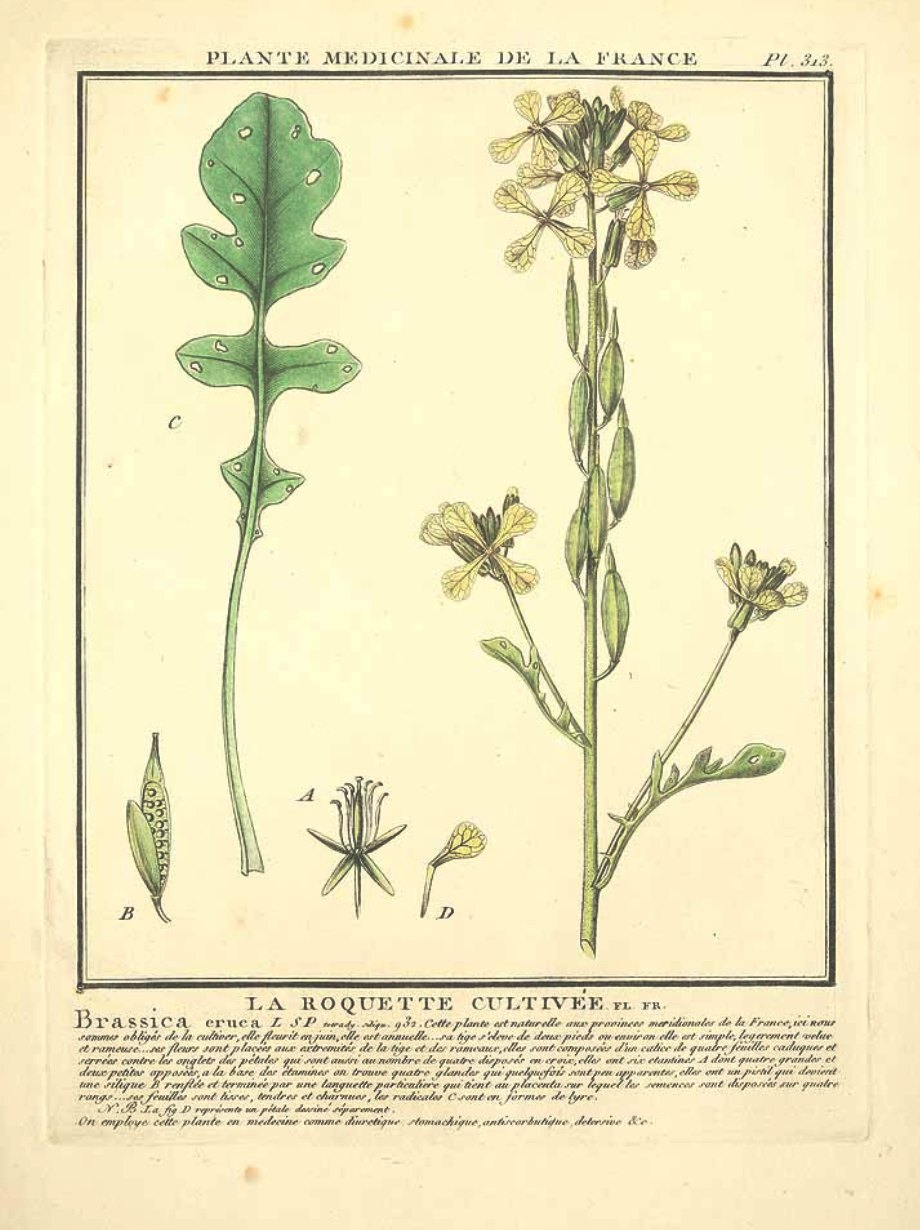 Ruchet is an annual herbaceous plant, high 20 to 80 cm, very aromatic and of spicy flavor, with ascending, generally branched and often reddened tops, which are glabrous or more or less pricked by the presence of simple hair . The leaves are petioles, glabrous, juicy and moderately fleshy, they are morphologically very variable, sinuated, loose-pennatifide to pennatosette. Their size varies up to 15 cm, the progressively reduced and subsidious upper, the bases often creased at the time of anthesis.
There is an inflorescence in multiflora raceme, stretching to fruition up to 50 cm. The chalice has 4 erect, brownish-violet and hardened sepals, which are generally persistent, with the outside edged (bottomed to the base), extended to the apex in a small croissant. The corolla is with four patented, white-yellow petals of 15-20 mm, veined with violet, largely obovate-spatulate, narrow in a long nail. The androcious is tetradinamo, with 6 stamens of which 4 are longer than the other 2.
The fruit of the rocket is an erect, glabrous or pride-like siliqua, attached to the stem, 2-3.5 cm long, surmounted by a compressed rostrum of 7-10 mm and dying in two valve with a very prominent center suture; The seeds are pearly, ellipsoid and flattened, ocher color.
For its morphological characteristics one can confuse the rocket with the genus Diplotaxis which has the same spicy aroma and the same properties. Kind of dryer environment with polymorphic but generally smaller leaves, and flowers almost always with yellow, oblong, much smaller, silique petals with very short and linear rostrum

Cultivation –
The rocket is one of the most special salads because of its peculiar and slightly spicy flavor, making it ideal for cooking in the kitchen to give you a variety of recipes.
This leafy annual plant is very simple to cultivate and very productive, so it can be cultivated also in family gardens; It is also a rustic plant that can be enjoyed for much of the year and has a short crop cycle.
As far as climate and soil is concerned, the rocket is very adaptable, but as most plants fear frost, drought and water stagnation; Can be in any soil, he likes good organic matter presence.
The rocket can be sown from March to September, but with tunnel cultivation it is possible to extend the cultivation period and have salad almost all year round. The rocket seeds last for a long time (you can use it for 4 years). The rocket germs fast and has a rapid growth: one week after sowing you will see the seedlings sprout and soon you can pick the first leaves to put in salad, which are also the most tender.
As far as the sixth plant is concerned, the rocket can be sown safely on a spaghetti or file. Sowing is faster, seeds are thrown and then raked lightly to cover the ground, while the file has the advantage of better distribution of the plants, which remain well aired, in this case you have to keep 25 cm between The files and 5/10 cm between the seedlings. The seed is deeply buried (just one inch).
The rucola, being a little picky plant, also fits well in potted cultivation, does not have particular requirements in terms of soil and can also be in a small medium vessel. It is advisable not to sow the rocket on the balcony too thick, leaving room to wet the ground without irrigating directly on the leaves of the plant.
Interesting is the consociational aspect of the rocket, in fact this plant has no problems of consociaion and variation, it suits any other crop and can be close to any horticulture that leaves enough leaves for its leaves. It is better than always to make a rotation that avoids the rotation of the rocket with other plants of the same family, thus avoiding succession between rucola, cabbage and rapanelli and even with the Oriental brassica as mizuna and mibuna.
The rocket requires frequent irrigation after sowing and rooting of the seedlings, then if the rain does not intervene, it is a thick and slightly wet plant, it does not like large amounts of water, but it has to be wet frequently. Same philosophy to grow the rocket on the balcony, compared to the garden, however, potted cultivation needs even more regular water intake. The weeding that is going to aerate the soil is necessary, as well as keeping it clean from the weeds and the weed to prevent it from suffocating the plumage seedlings.
From the health point of view, the rocket smells the lichens louse lapping the rocket leaves and generally engage the crucifixes. Apart from these fleas of earth are quite resistant plants, even for their short cycle. If they are well-spaced they do not fear fungal diseases.
As for harvesting, the rocket leaves can be picked up right away, usually expecting the plant to reach 7-8 cm in height, cutting the leaves near the collar. Reap even 5-6 times and then continue to collect. Typically, the rocket is harvested from one month after sowing.

Uses and Traditions –
The Rucola is a kind of far-away Mediterranean-Turanic origin, cultivated since antiquity in the gardens of all Italy. Quite rarely, it also appears in the subordinate state in rather disturbed environments, especially in the dwellings. The Romans, who also consumed seeds, attributed magic qualities and used it as aphrodisiac. Cultivation was often carried out in the grounds that housed the phallic statues erected in honor of Priapo, god of virility. Ovid in the Ars Amatoria called her ‘eruca salax’ or ‘herba salax’, that is, luxuriant grass, not recommended in case of love disappointments. Pliny asserted: ‘It is believed that the desire for coitus is stimulated by foods, like the erupt …’. Dioscoride, a Greek physician, claimed that raw auburn abundantly ‘dwindled Venus’. Also during the Renaissance he wrote about the aphrodisiac effects of the rocket, and the herbalist Matthias de Lobel (XVI sec.) Talked of certain monks who excited by a friendly rucola, abandoned the vow of chastity. Spicy spicy seeds are used like those of mustard and in some countries it extracts a delicious food oil. The generic name is that used by the Romans and cited by various classical authors.
The rocket has been cultivated for centuries on the shores of the Mediterranean and used for as long as by people for the preparation of recipes and medication remedies.
Both the leaves and the seeds of the rumen besides being used by the Romans were common in Britain in the Elizabethan era. Today also in Italy is very commonly cultivated as a salad grass.
The leaves of the Eucalyptus vesicaria are used for culinary purposes and appreciated for their decided taste. Typical is the use of rocket salad as a side dish, and can also be used to make a pesto (pasta dressing). Seeds can also be used to replace mustard seeds in the home, or to obtain a pleasant taste oil.
It is an antiscorbutic herb (as the rocket has a good mineral content and is rich in vitamin C), stimulant, diuretic and rubeform, with high concentrations of nitrogenous substances giving it the characteristic spicy flavor. Flowers have similar, but more bland flavors, and are also used to garnish salads.