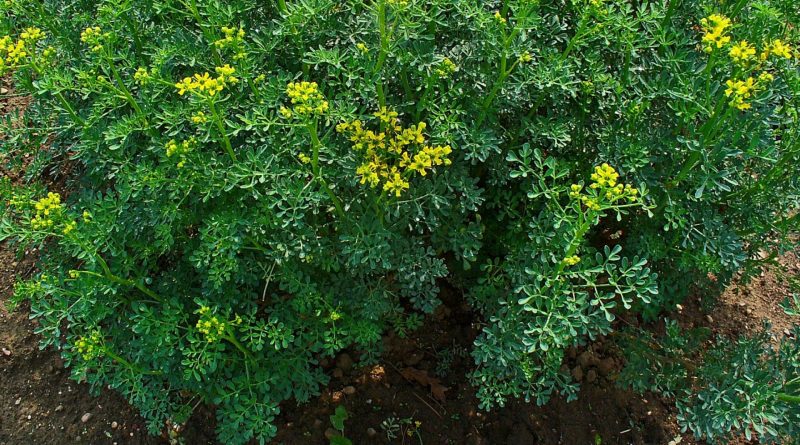 The common rue (Ruta graveolens L.) is a plant belonging to the Rutacee family. This species is common in Italy and can be found spontaneously below 1000 meters of altitude and it is a plant with woody woods only at the base of small size.

Systematic –
Systematically the Ruta graveolens belongs to the Eukaryota Domain, the Kingdom Plantae, the Magnoliophyta Division, the Magnoliopsida Class, the Sapindales Order, the Rutaceae Family and then the Genera Ruta and the Species R. graveolens.

Etymology –
The name of this genus derives from the Greek words ruô = conservo or perhaps rhèo = scroll, with allusion to the medicinal properties and above all the emmenagogues of the plant. The specific term comes instead from Latin gravis = heavy, strong et olens = hint for its strong and unpleasant smell.

Geographic Distribution and Habitat –
The route is a typical plant of the hot areas of Europe and the arid region of Southern Siberia: these are usually steppic plants. If the gravitational area around the Black Sea is called Pontiche. The characteristic habitat is that of strapfish and rocky areas, sunny, limestone and dry grasslands from the floor up to 1100 m. It is often cultivated and insolvable. 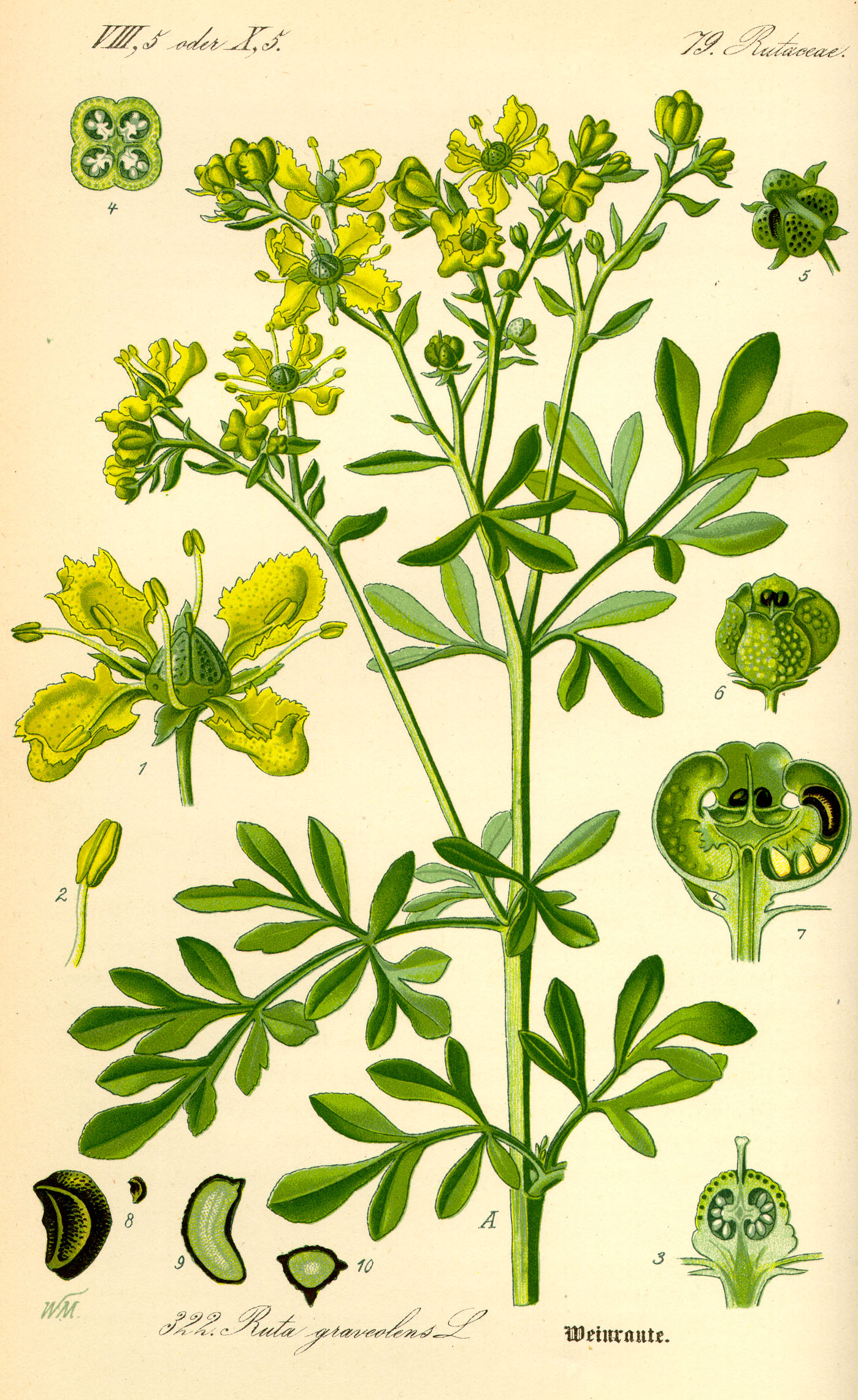 Description –
The Ruta graveolens is a perennial tree with branches branched, 40-100 cm high. The leaves are of green-glaucous color, with a petiole of 2-4 cm, are arranged alternately, have the reniform limb and two or three times pennato-composite, with spatulas segments, dull or mucronate, with a slightly fleshy texture And dotted with glands that give a strong scent. This plant has yellow flowers, with central flower pentamero and other tetramers. It is a racemic inflorescence with leafy lanceolate bratheets and small flowers, carried by short peduncles 1-2 times long coccarye, have persistent acute sepals and 4 petals (sometimes 5 in the central flowers) yellow or yellowish-greenish, Concave, slightly toothed and wavy on the rim, ovary over. The fruit is a glabrous, subtropical coccary, of 4 or 5 wrinkled carpets, with dotted-rounded apical teeth.

Uses and Traditions –
The Ruta graveolens has a pleasant aroma, not too pronounced and is used to flavor the grappa. Seeds with mint leaves are used to flavor game meat.
It contains a series of furanoacridons and two acridone alkaloids (arborinine and evoxanthine); Also contains coumarin and limonoids.
The essential oil of Ruta graveolens contains two main components of undecan-2-one (46.8%) and nonan-2-one (18.8%). Ruta graveolens cell cultures produce 3- (1,1-dimethylallyl) coumarin), and the ethyl acetate extract of the leaves gives two furanocoumarin, an alkaloid quinoline and four alkaloid quinolones; In addition, the chloroform extracts of the root, stem and leaf show the isolation of kalepensine furanocumarines.
Its coumarin derivatives seem to contribute to the pharmacological activity of the plant. These furocoumarines include: bergaptene, psoralenes, xantoxantine, isopimpinellina and marina.
It is emphasized that route extracts are mutagenic and hepatotoxic; Large doses can cause severe gastric pain, vomiting, systemic complications, until death. Route oil can cause kidney damage and severe liver degeneration.
Exposure to route extracts, or plant preparations derived from it, can cause severe photodermatosis, which can cause real skin burns.
Route extracts are potentially useful as a potassium channel blocker. They are used to treat many neuromuscular problems and to stimulate the beginning of menstruation, also has an emmenagogic effect and abortive effects therefore can not be used by women of childbearing age. In addition, the route has a spasmolytic effect at relatively low doses for this reason should be taken with caution, considering the potential for serious side effects; Furthermore, unfortunately, clinical trials are still partial and limited.
A research conducted by Italian researchers has shown that the aqueous extract of Ruta graveolens L. causes death in different cell lines (U87MG, C6 and U138) of glioblastoma. The effect of Ruta graveolens was mediated by ERK1 / 2 with the activation of AKT, and the inhibition of these paths, via PD98058 and wortmannina; This would justify the antiproliferative activity of the extract. These compounds are now widely used to test new drugs in preclinical studies on animal gametes.
The route, as it is said, is a toxic plant for its content in furocumarine and routines and for the cholinergic alkaloids present in the essential oil from the unpleasant odor that is found in the vesicles of its leaves. In addition to causing severe headaches with consequences that may be lethal, it is also advisable not to handle it to avoid the risk of redness, swelling and blisters.
Ultimately it is an anti-inflammatory plant; abortion; antispasmodic; anthelmintic; carminative; emmenagogue; expectorant; hemostatic; rubefacient; homeopathy; ophthalmic; stimulating; stomachic; antidote; emetic.
Considered from the earliest times, a magic cure for every malady was in fact already known by the ancient Romans. It was listed on the list of plants cultivated in the garden of the monasteries under Charlemagne and in the Middle Ages it came into the composition of a vinegar which was used to fight the plague.
The route was used by popular medicine in very infused infusions, to calm the hysterical attacks, to favor and make menstrual cycles easier (and still an abortion), to soothe flatulent intestinal colic, to lighten The view with repeated washings in case of glaucoma.
A cotton swab impregnated with a decoction route and inserted into the nostrils was thought to cure chronic rhinitis.
Finally, the route has some positive effects on digestion and well know the houses that prepare the grappa on the route, dripping a rope twig in the grappa.
It is emphasized that, because of its repellent properties, it is used to fight insects by spreading its leaves in the cracks where they hunt and keep in the cellars, it seems that with its smell is effective to move the mice.
Once the route was considered effective against fear, it was cultivated to defend the home from various accidents of evil forces and was held in pockets or worn in special bags to deal with difficult and fearful situations. It was considered anaprodisiaic, so that monks in the Middle Ages used it in salad with other herbs to get rid of erotic instincts and dreams.
In popular beliefs it was believed that the houses where the route was growing were to be considered “privileged”.

The common rue is a plant, as seen, also for the preparation of liqueurs. In the kitchen, fresh leaves are used, in small doses they are used in salads, meat or fish dishes and to prepare aromatic oils and vinegars. The routine present in the plant has numerous active principles including capillary fragility, as it is to be considered as vitamin P, which has the capacity to decrease permeability and capillary fragility precisely.
The route is in fact a medicinal plant whose characteristics were already known since antiquity, homeopathic remedy is indicated against bruises and injuries to tendons caused by sports trauma and is obtained with fresh leaves of ruta.
It is also helpful in case of eye fatigue due to excessive strain of sight or period of mental fatigue and to relieve anxiety and depression.
Rut graveolens is effective in case of tired eyes, headaches, persistent and acute pains, cramps, coughing, periosteum inflammation, back pain, tennis elbow, excess of the carpal, depression, anxiety and after surgery.
Ruta graveolens diminishes swelling, acts as a disinfamous action and is a well-known remedy in the treatment of injuries caused by sports injuries. It also calms the nervous system, soothes the cramps and attenuates painful conditions.
Psychic level is used as a remedy and help to fight anxious and depressed and is able to soften the toughest and most aggressive souls.

Methods of Preparation –
Various infusions and herbal teas are among the systems to use and prepare the route.
Among these, the infusion of graveolens rut ​​against gastric and intestinal irritations. To prepare this infusion pour 1/4 liter of boiling water on a teaspoon of graveolens, leave to rest for 5-10 minutes and finally filter. The need needs a cup of infusion of ruta once a day. Precautions: Be careful not to exceed the dosage, to avoid gastric and intestinal irritation, photosensitisation, dizziness, strong salivation and weak pulse. In case of very sensitive skin only contact with the fresh plant can cause itching or skin inflammation, with vesicle formation.
Among the herbal teas you remember the one on the route. For elderly people is indicated a herbal tea prepared with 10 g of cumin seeds, 30 g each of hawthorn leaves, melissa and mistletoe leaves, 20 g of rye and 20 g of valerian root.
Although several properties are recognized on the route: carminative, digestive and sedative. However, it is advised not to use it as less experienced as many of the substances contained in it may be toxic if taken over a certain dose.
In the kitchen of the route plant, fresh leaves are used to flavor various types of meat, fish and for use in fresh salads.
The foliage is also used, as mentioned above, for the realization of a type of grappa, which can also be done artisanally in the home. Again, never exceed the doses but use a few leaves (twigs) to flavor it.