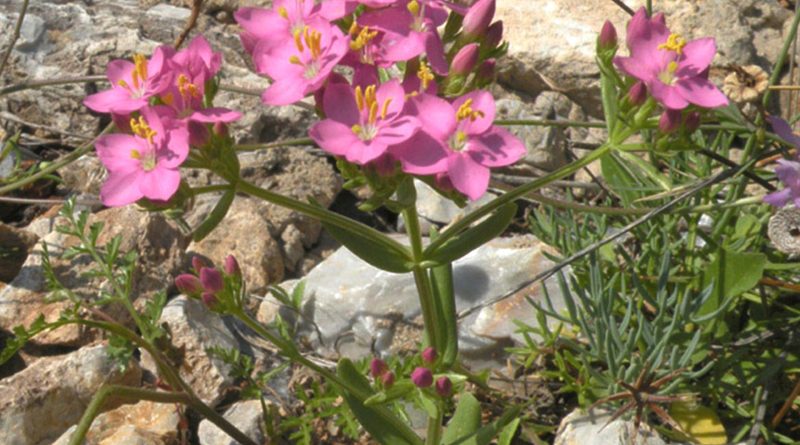 Centaurium erythraea (Rafn., 1800) is a herbaceous, annual or biennial species (depending on the latitude where it grows), belonging to the Genzianaceae family. Not to be confused with the Centaurea centaurium, with royal corolla, very common in meadows and ditches, which in common language is often referred to as a minor Centaurea.

Systematic –
From the systematic point of view, Centaurium erythraea belongs to the Eukaryota Domain, the Kingdom Plantae, the Tracheobionta Substitution, the Spermatophyta Superdivision, the Magnoliophyta Division, the Magnoliopsida Class, the Asteridae Subclass, the Gentianales Order, the Gentianaceae Family and then the Genera Centaurium and the Specie C. erythraea.

Etymology –
The name of this genus derives from the Latin “Centaurium”, translated from the Greek “κενταύριον”, variant of κενταύρειον = “centaurea because, according to tradition, to such a plant was attributed to having reshaped the centaur Chiron, son of Crono Tailor and expert healer. He was the teacher of Asclepius and began to care for her body with herbs. So he cared for Chiron’s wound on his feet and led them by Hercules. According to legend for such qualities, his death was transformed by Jupiter into a constellation, that of the sagittarian.
The term species comes from the Greek “erytros” = “red” with allusions to the color of its flowers.

Geographic Distribution and Habitat –
This species is native to Europe, West Asia and North Africa; Is commonly found throughout the Italian territory from sea level to low mountain. It usually grows in meadows but also in stubble.
It is a thermophilic plant that frequently occurs in the areas of the woods, clearings, dry meadows, margins of paths and even in sandy soils. 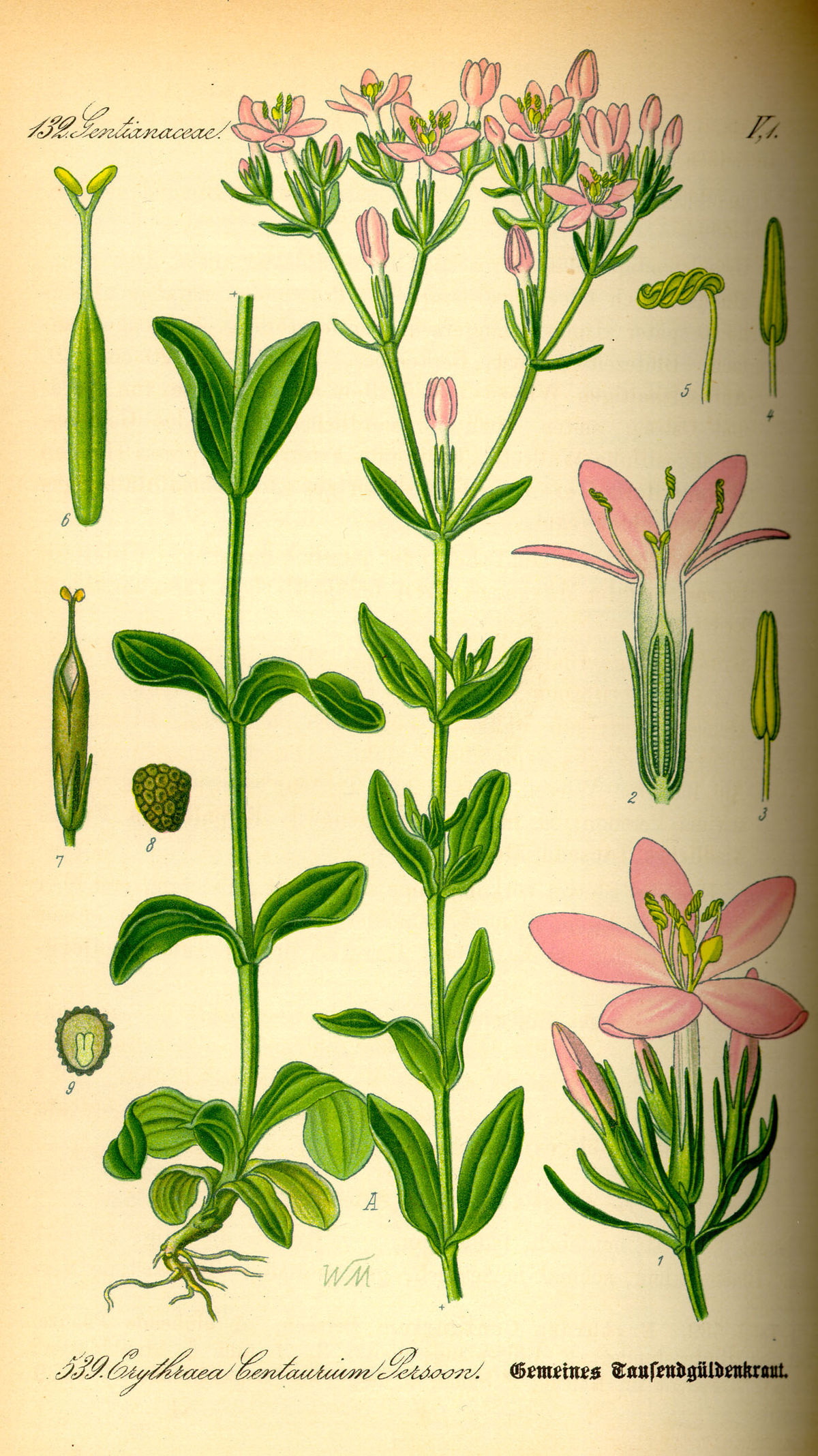 Description –
Small Centaurea is a tall plant around 20-50 cm which, under favorable conditions, can also reach 60 cm; Glabra with quadrangular stem, erect generally straightforward up to 4/5 lower, densely branched up, at the top two.
The leaves of this species are opposed to the basalt with rosette, 3-5 cm x 2-3 cm, obovate, dull and the smallest, narrow and acuminate cauldrons.
The flowers are practically sessile or almost. They have a shorter goblet of corolla tube, which is 1-2 cm long with 5 lobes of rosy red color, without stains, in full margin are collected in small corimbus. The stamens protrude from the corolla tube, and the anthers wind up after the pollen emission phase.
The fruit of the smaller Centaurea is a capsule, about 1 cm long, 1 mm high, which opens in two valves and the seeds are less than half a millimeter long and thin.

Uses and Traditions –
The therapeutic properties of the lower centaurea are those stimulating digestion, thanks to the aperitif and febrile properties. Tonic of the liver and bile, soothing, diuretic, sedative of the digestive system, vermifuge, purifying.
For external use the minor centaurea also performs a healing action. It’s a local antiseptic. It is used on athletic wounds to counteract hair loss and the treatment of eczema-like dermatitis.
It is recommended for people recovering from body weight. It contrasts the loss of temporary appetite, the digestive and gastrointestinal problems mild. It promotes secretion of the liver and stomach. The bitter substances stimulate the activity of the stomach in a reflex manner, thus promoting the secretion of gastric juices. It is a general tonic that allows you to fight fatigue. Used as a diuretic or to lower the fever. Combines intestinal parasites, prevents gallstones, liver problems and migraines.
Used in local application as antiseptic, but also to remove lice or fight hair loss. Genzianin, an alkaloid compound, gives it excellent anti-inflammatory properties. In some cases of diabetes, centaurea is used as a pancreatic stimulant.
A legend says that the centaur Chirone was the first to use this plant to heal from a wound to the foot produced by a poisoned arrow hit by Hercules. From that moment on, the plant was considered magical. The Gauls used it as an antidote against snake bites and as a febrile (from which the name of fever grass). There is evidence of his healing work among the disciples of Hippocrates between the 5th and 4th centuries BC It was recommended as a purgative and emmenagogo but also to treat the eyes or treat the wounds. Over the centuries, it has been used as a medicinal plant to cure the liver.

In ancient times, the plant was called “fel terrae” = “earthy” due to its very bitter taste. This characteristic is taken for the presence of substances such as bitter glucosides, gentiopycrine, erythiurine, phenolic acids, triptenes, flavonides, fatty acids, resins (the same principles as in the Genzians).
A legend reminds us that a garland composed of these flowering plants, carried in the head of Valpurga’s night, between April 30 and May 1, protects against the wicked wicked influence.
The plants are used to blossom the leaves and the summits, dried in the shade, as it is said, in a dry and ventilated place.
For so long it was used as a surrogate of the quinine; In the form of decoction or infusion or mother tincture, in popular medicine and in herbal medicine is used as carminative, coleretic, purifying, stomachic, tonic, vermifuge. The greened pestilent leaves are used to disinfect wounds, such as scarring and also as after shampoo for hair care.
Among the curiosities of this plant, it is recalled that Centaurium flowers open in the morning if there is good weather and close at noon. Even a small passing cloud is able to close them.
Today it is also used for the preparation of the liqueur called “vermouth” with “eupeptic” effects on gastric secretion.

Preparation Method –
For the preparations, using this plant, remember the centaurea herbal tea.
Centaurea herbal tea is prepared with 2 grams of dry plant in 150 ml of boiling water for 15 minutes; To drink warm 1/2 hour before meals.
Another preparation is that of an aperitif infusion against anorexia.
It is obtained with a spoonful of flowered summers in a cup of water: at the beginning of the boiling take off from the fire and allow to infuse for ten to twelve minutes. Drink half a cup half an hour before the two main meals soften at will.
Another interesting preparation is that of aperitif, tonic and digestive medicine.
In this case, a fist of flowers flourished in a liter of liqueur sweet white wine (eg Pantelleria pass): let it macerate for a week and shake occasionally; Filter and consume a glass half an hour before meals as an aperitif-tonic or after meals as digestive.