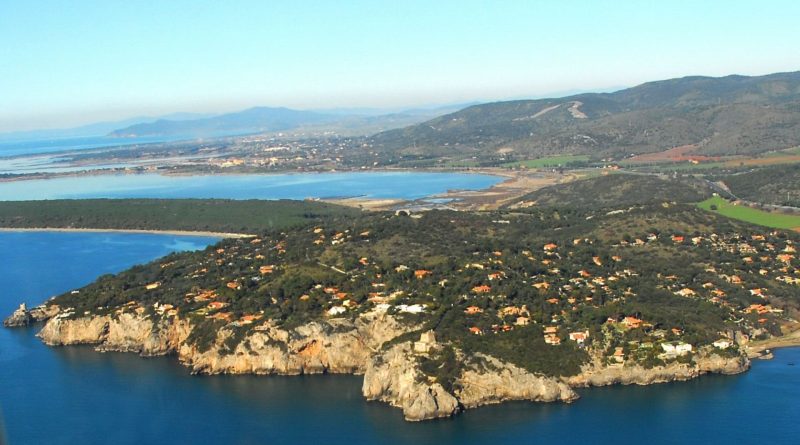 While Politics is becoming impoverished, and nowadays, with no more ideology battles, our country is sinking more and more. A ship that is likely to be dragged by if the future generations to which, now, apologize is also provocative.
A country that is always smaller and not only in cultural and political terms but also in a strictly physical sense.
Our children will inherit a lower level of availability of land (to live, work, move, etc.).
We refer to the wicked lack of central political guidance that, through urban norms to reinvent, allows each and every municipality (in fact) to continually erode its landholding through a whole range of activities that essentially contribute each day To remove physical soil from future citizens and to Nature. A disaster of immense proportions that, translated in economic terms, is worth more than any GDP and state budget.
According to Ispra data of 2016, “Soil consumption continues to increase steadily, by 2016, 23 thousand sq km.” A surface equal to the size of Campania, Molise and Liguria combined; “7.6% of the national territory”. These are the new estimates contained in the Soil Consumption Report of the National Environmental Protection System (SNPA) recently submitted to the House. 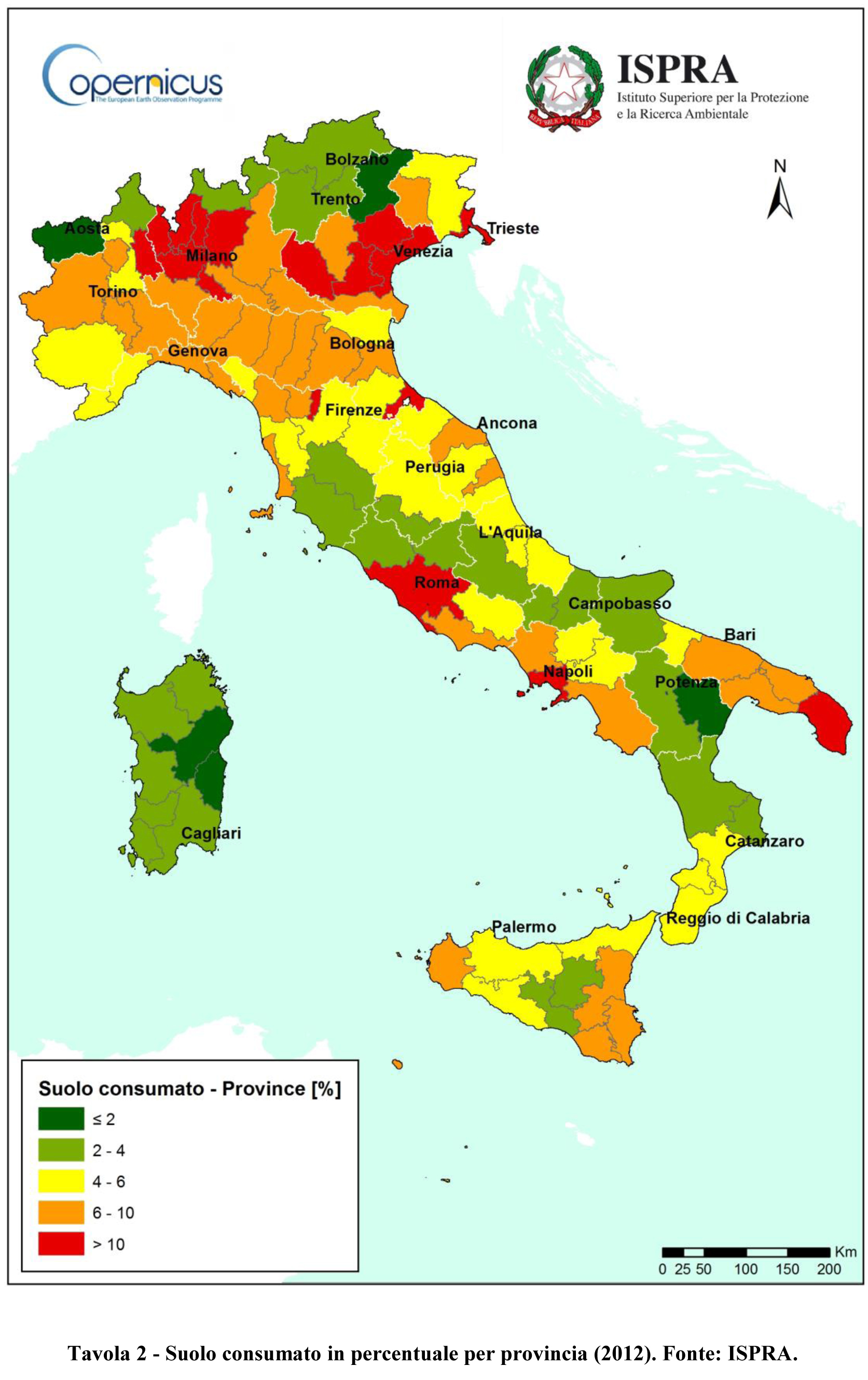 According to these predictions, the future is far from rosy. ” The scenarios for projection of transformation of Italian territory to 2050 speak at best of a loss of another 1,635 sq km; A loss of 3,270 sq. Km in case the low rate of consumption dictated by the economic crisis was maintained, or 8,326 sq. Km in case the economic recovery brought the speed at the value of 8 square meters per second recorded in recent decades.
In short, disconcerting and disconcerting data, especially because listening to almost the whole political debate of the whole constitutional arch, silence is virtually imperative.
A phenomenon that travels at a speed of 4 square feet “devoured” every second, for a total of 35 hectares per day, or 250 square miles in a two-year period. And that will cost us 800 million euros a year. In addition to telling us goodbye in 25 years to a quarter of the cultivable fields.
The Higher Institute for Environmental Protection launches the alarm: it is urgent to ensure a real containment of soil consumption, especially in hydrogeological or seismic areas, giving the Communes clear indications and useful tools. “The goal is not to block the construction sector – says Ispra – but to promote a sustainable, sustainable use of environmental resources.” An appeal to the policy that in fact has achieved a first result: in May the House approved the bill against land consumption. The measure now, as usual, is stationed in the Senate, but many express criticism of certain points and strong doubts as to whether it can complete it until final approval.
According to Ispra, soil consumption in Italy continues to grow, although it has marked a major slowdown in recent years: between 2013 and 2015 new artificial coverings covered another 250 square kilometers of land, or about 35 hectares on average Per day, almost like 35 soccer fields. A processing speed of about 4 square feet of soil that, in the last period, was irreversibly lost every second. After reaching 8 square meters in the second half of the 2000s, the slowdown started in the period 2008-2013 (between 6 and 7 square meters per second) has therefore consolidated in the last two years at a reduced rate of consumption Of land, which continues to cover, uninterruptedly, natural and agricultural areas with asphalt and concrete, buildings and buildings, shopping centers, services and roads. The Environmental Protection Institute’s monitoring network data show that, at national level, the amount of soil used has risen from 2.7% in the 1950s to 7.0% estimated for 2015, an increase of 4.3 Percentage points and a growth rate of 159% (1.2% further between 2013 and 2015). In absolute terms, it is estimated that soil consumption has affected approximately 21,100 square kilometers of our territory.

To this it is necessary to add the data deriving from the desertification processes of the agricultural soils and those resulting from the loss of the forested areas (only partially compensated by new “forest facilities”).
The costs of cementation which are not always immediately perceived include an average expenditure of up to 55,000 euros per year per hectare of land consumed and will change depending on the ecosystem service that the soil can no longer provide due to the transformation that has undergone. This is due to agricultural production (over 400 million) to carbon storage (around 150 million), erosion protection (over 120 million) to damage caused by water infiltration (almost 100 million) and lack of Pollinator insects (almost 3 million). As an increase of 20 hectares per square kilometer of soil consumed corresponds to a 0.6 degree increase in surface temperature, it has been estimated that, only for urban microclimate regulation, the cost is around 10 million per year.
Thanks to the use of new cartographic instruments, Ispra has been able to locate more precisely the areas where the problem of wild cementing is more serious. The most affected area is the North, with an acceleration in Northwestern regions compared to Triveneto, which until 2008 had a higher growth rate. In 2015, over 5% of the soil is consumed in 15 regions, with the highest percentage in Lombardy and Veneto (over 10%) and in Campania, Apulia, Emilia Romagna, Lazio, Piedmont, Sicily and Liguria where we find Values ​​ranging from 7 to 10%.
Data that does not accept objections or replies. It urges an urban model that, based on ecological and agricultural-forestry results, determines a new model of land use: ecologically sustainable and humanly bearable. Here too, it is incredible how, within our country, urban planning legislation is heterogeneous and of dubious application; You move from Regions with recently updated regulations (such as Sicily) to Regions where the urban model is idle and no longer available. Unfortunately, the common denominator often remains the slowness, crappyness and conflict of various norms and various bodies that instead of streamlining the process “hinder” it with a domino effect that ends up promoting incapacity, waste, and degradation.
In percentage terms it is interesting to note how different municipalities exceed 50%, and sometimes 60%, of the territory consumed. They are often small or medium-sized towns that show a tendency to consume soil with dynamics that relate to the urbanization processes of their provincial capitals, with the characteristics typical of a single metropolitan area.
Nothing is spared: not even the coasts; rather. At national level, more than a fifth of the band within 300 meters from the sea is now consumed. Among the regions with the highest values ​​within 300 meters of the coast line, Marche and Liguria have more than 45% of the land consumed, Abruzzo, Campania, Emilia Romagna and Lazio with between 30 and 40%. Abroad, Abruzzo, Emilia-Romagna, Campania and Liguria, with over 30% of consumption, are among the 300 to 1000 meters. In the range of 1 to 10 kilometers, we find Campania with about 18% of consumption.
Hydrogeological and seismic areas. Of the total soil used in Italy, 11.7% fall into highly rated landslides classified as moderate to very high risk landslides, 16.2% in areas with moderate hydraulic hazard and the remaining 72.1% Outside areas with hydrogeological hazards. The data also confirm the high presence of areas built within high seismic hazardous areas with the highest values ​​in Lombardy (14.3%) and Veneto (12.5%) and in highly hazardous areas High (4.5% nationally, 6.5% in Campania).
Soap consumption. The soil consumption rate in Italy compared with demographic growth shows a significant growth over the years until 2013, with a per capita soil value that goes from 167 square meters in 1950 to every Italian, almost 350 meters Squares in 2013. In 2014 there would be a slight slight decrease: the value goes down to 345 square feet per capita.
Comparison with Europe. According to estimates by Eurostat (2016), the share of land with artificial coverage in Italy is estimated at 7.0% of the total, against 4.1% of the EU average. Italy is ranked sixth behind Malta (32.6%), Belgium (12.1%), Netherlands (12.3%), Luxembourg (10.1%) and Germany (7.1%).
And while in Parliament and the Senate is litigating power struggles ever further away from the rights of citizens and the environment that is increasingly home to us, our children ask themselves what kind of parents have put them to the world.
As usual, history will not judge us well.