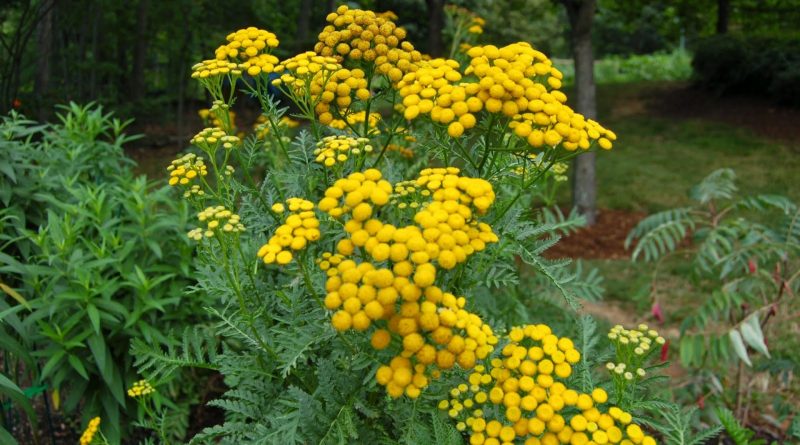 Tanaceto (Tanacetum vulgare L., 1753) is a yellow herbaceous plant, belonging to the Asteraceae family. It is a perennial plant by means of gems placed at the level of the ground and with an elongated flowering axis, often without leaves.

Systematic –
The Tanacetum vulgare belongs to the Eukaryota Domain, the Kingdom Plantae, the Tracheobionta Subordination, the Spermatophyta Superdivision, the Magnoliophyta Division, the Magnoliopsida Class, the Asteridae Subclass, the Asterales Order, the Asteraceae Family, the Asteroideae Subfamily, the Anthemideae Tribes, the Tanacetinae Subtribution, the Tanacetum Genus and the T. vulgare Species.
It should be said that the family of “Tanaceto” (Asteraceae) is the largest in the vegetable world, organized in 1530 species for a total of about 22,750 species. In older classifications, the Asteraceae family is also called Compositae.

Etymology –
The generic name (Tanacetum), derived from the medieval Latin “tanazita” which in turn comes from Greek “athanasia” (= immortal, long-lasting) is likely to indicate the longevity of the inflorescence of this plant; The term “athanasia” refers to an ancient belief that the drinks made with the leaves of this plant gave eternal life. The specific name (vulgar) indicates that this is a very common species.
The currently accepted scientific combination (Tanacetum vulgare) was proposed by Carl von Linné (Rashult, May 23, 1707 – Uppsala, January 10, 1778), a Swedish biologist and writer, considered the father of the modern scientific classification of living organisms in the Species Plantarum publication 1753.
In German this plant is called Rainfarn; In French it is called Tanaisie vulgaire; In English it’s called Tansy.

Geographic Distribution and Habitat –
Tanacetum vulgare is a common plant in Italy. It is often found on pristine terraces and meadows, on the edge of the roads, along the courses of ditches and torrents.
Eurasian plant; You still think that this species is not indigenous to Europe. Its spread is high: in Italy it is a common plant all over the territory (missing in some southern area and Sardinia while it is present in Sicily). Europe is everywhere, even on the reliefs (excluding the Dinaric Alps). While in Asia it is common especially in western areas. This plant is also found in North America.
The habitat typical for this pittance is the uninhabited mountains and the mountainous slopes, the roads or along the banks of the watercourses. The preferred substrate is both calcareous and silica; So the soil must have a neutral pH with average nutritional values ​​and with medium dry soil. Its altitude diffusion is up to 1600 m s.l.m .; The Tanacetum vulgare therefore frequents the vegetation planes from hill to mountain. 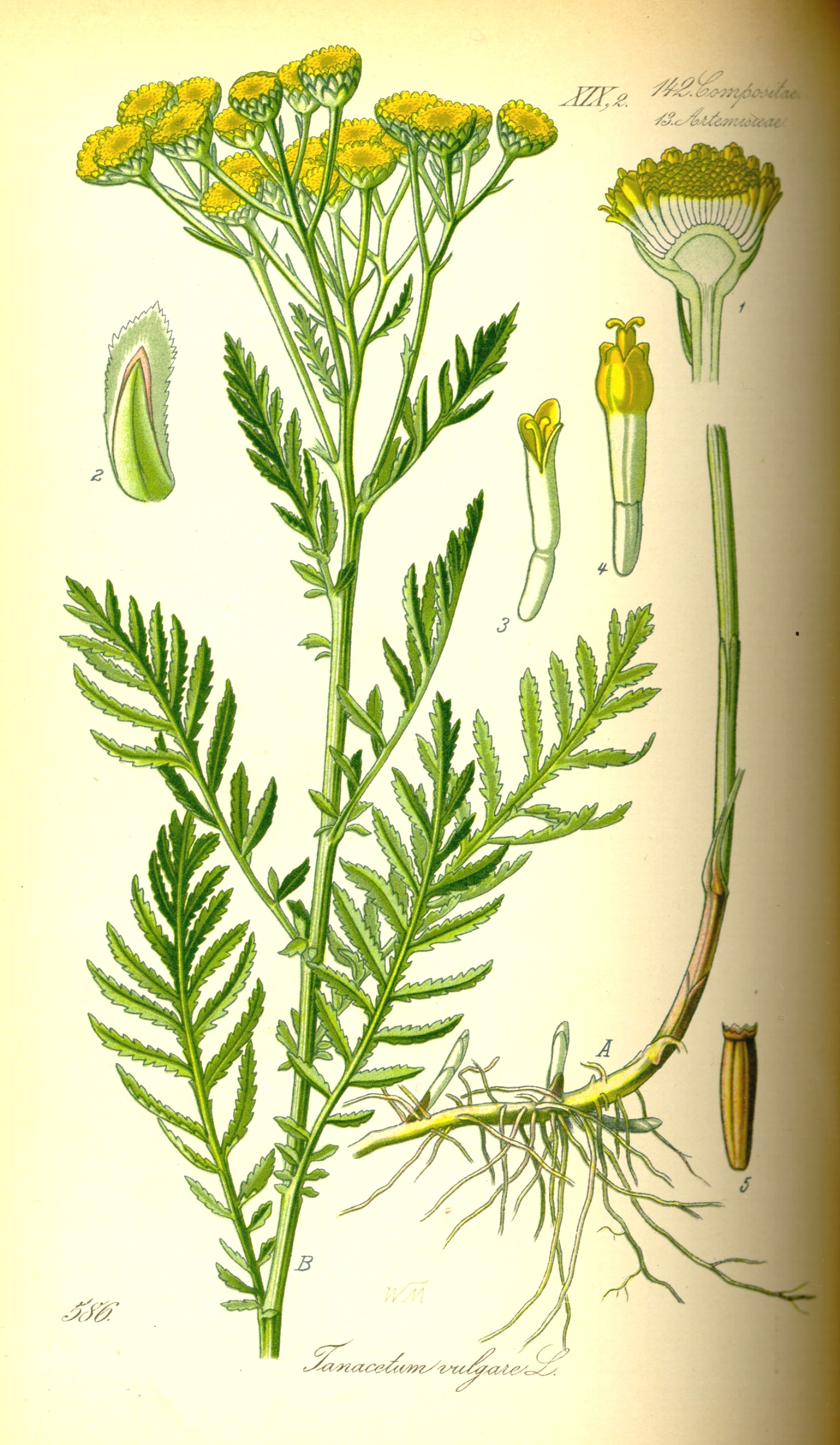 Description –
Tanecato is a perennial herbaceous plant 60 to 120 cm tall, strongly aromatic, with a creeping and branched rhizome, woody, with erect, leafy, streaked, branched branches at the top.
The leaves come with a 5-15 cm petiole, alternate, glabrous, with 15-23 pennatopartiti segments, serrated on the edge; The leaves of the cobwebs are on the back of the small glands.
The inflorescences are compact corimids, dense and flattened terminals with tubular flowers of a yellow-gold color of approximately 1 cm Ø, long-pedunculated discoid shape. The peripheral flosculi, around the margin of the inflorescence, are females with trident corolla, while the centers are hermaphrodites with a 5-teeth corolla. The involucre brattees are lanceolate-dull and scary at the margin, very well-known.
The fruits are long branches ca 2 mm with 4-5 longitudinal shingles dotted with glands. Poppy with a small crochet unruly cropped.

Methods of Preparation –
Considering that Tanacetum vulgare has digestive, bitter-tonic, vermifuge, astringent, febrile, and vulnerable properties, you can understand how many and what are its uses. They use leaves and flowers: the first, dried, cure migraine and rheumatism, while bitter tea, made with flowers, is used as a vermifuge. From the plant, the industry obtains insecticides, repellents and dyes.
In the kitchen the use of Tanacetum has decreased over time or almost disappeared. It can be used as a flavoring for salads, omelettes, pudding and to flavor game dishes. Today it is still used for the preparation of an aromatic digestive called Arquebuse.
Young leaves were used as a seasoning and to decorate desserts and snacks.
Tanacetal is therefore used primarily to prevent headaches and headaches that accompany the menstrual cycle to prevent vomiting manifestations that are sometimes caused by strong headaches, and also help relieve muscle wasting by attenuating Abdominal pain often associated with the menstrual cycle.
In principle, tacetacle is effective on a preventive basis, so it is advisable to take it before it is on or follow a treatment period of 20-30 days to interrupt with a rest period and then resume another treatment phase.
The correct doses of dry extract are about 200 mg per day to be taken away from meals.
Let’s look at how to easily prepare a tangerine with tanaceto using 10 grams of flowered sumo dried with tanaceto and 1 liter of water;
Water is boiled, poured on the flowers and left in infusion for about 10 minutes. It filters and then drinks in the day.