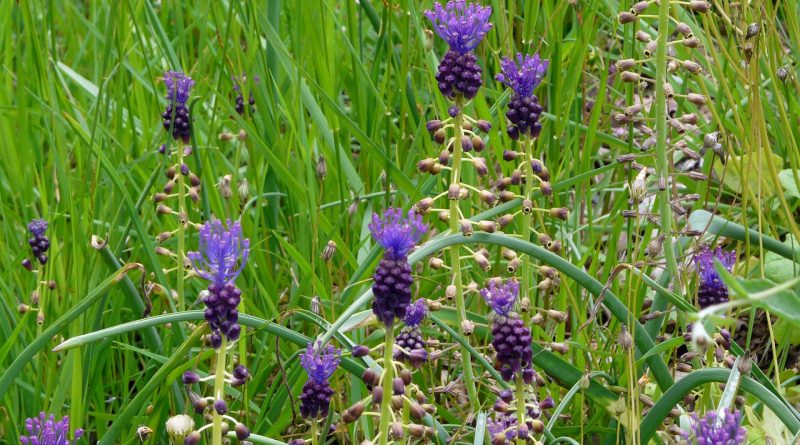 The lampascione or lampagione, also known as canine onion, cipollaccia turchina, hyacinth with a bow or from the plume hyacinth (Muscari comosum (L.) Mill., 1768), is a herbaceous plant of the family Liliaceae (o Asparagaceae according to the classification APG), widespread in Mediterranean regions. The flowers of the plant’s bloom in spring and are persistent until the summer.

Systematic –
The grape hyacinth belongs to the Domain Eukaryota, Kingdom Plantae, Division Magnoliophyta, Class Liliopsida Order Liliales, Liliaceae family, to the genus Muscari and then to the species M. comosum.

Etymology –
According to some authors, the genus name seems to derive from the Sanskrit Mushka = testicle, because of the shape of the bulbs, while for others it derives from the greek modern moschàri = “Hyacinth Cluster” or the greek classic Moschos = “moss” for ‘ smell of some species of this genus. The specific name from the Latin comosum = haired alludes to the “bow” of sterile flowers. The synonym Leopoldia is in honor of the Grand Duke of Tuscany Leopold II.
They are synonyms Hyacinthus comosum L. and Leopoldia comosa (L.) Parl ..
The local name of this species are: Lampagione, Lampasione, wild onions, hyacinth from the plume, Muscaro, Muscari, Agaric, Hyacinth vines (or screws), wild onion, wild onion, snakelike Onion, Porrettaccio, Cipollone, Zazzeruto.

Geographic Distribution and Habitat –
The Lampascione is found from the basal up to ca. 2000 m altitude, in the grassy fallow, pastures and crops.
In Italy it is present everywhere, but much more common in the south. The typical Habitat is to fields, fallow, vineyards on calcareous soils preferably up to 1,500 m altitude. 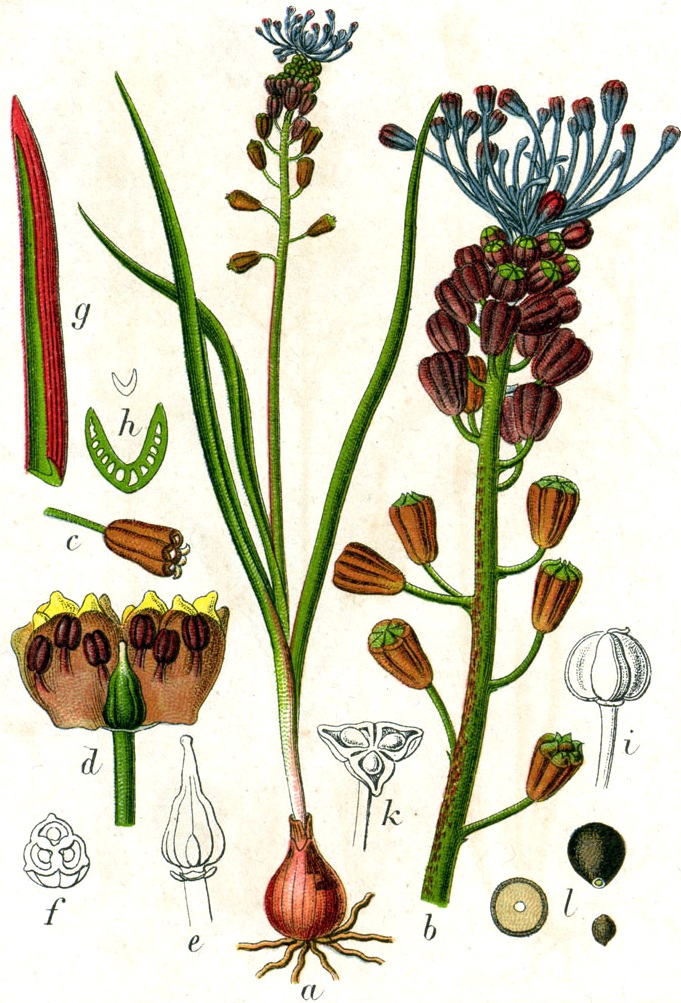 Description –
The grape hyacinth is a bulbous plant characterized by a bulb globose or ovate-piriformis (3-4 cm in diameter) with outer skins red-purple and 2-4 basal leaves, linear, erect-licenses or curved, sometimes prostrate, which they originate directly from the bulb. In the spring it produces a scape erect, 20-40 cm tall, simple, glabrous, afillo, on top of which develops a cylindrical or pyramidal raceme bottom formed by fertile flowers, color from purplish-yellow-olive to dark and terminated all ‘apex sterile flowers, long stalked, mauve color.

Customs and Traditions –
In southern Italy and in various parts of Sicily the fitoalimurgica tradition includes Lampascione among the most sought-greens and appetites. The Lampascione bulbs are cooked in various ways, after removal of the outer skins leathery.
The Lampascione is the name commonly given in Puglia to the bulbs of two different plant species belonging to the Liliace family, leopaldia (Muscari) hyacinth, and jacintus ciliatus, although the true lampascione is the first unmistakable purplish red and the typical bittersweet flavor. Versatile in the kitchen, have been known since ancient times for the action, purifying and laxative. That of wild onions in oil is a preparation that affects the whole region.
The globular bulb of this plant, rich in minerals and that grows to 12-20 cm in the ground, is similar to a small onion slightly bitter taste and is consumed especially in southern Italy, especially in Basilicata and Puglia. In these region are recognized as one of the traditional food products. The lampascione, in the traditional cuisine of Calabria, Basilicata and Puglia, is prepared after clearing the individual bulbs of each track of land and roots, and after having been kept in water for about an hour (to enable them to lose fluid – bitter – that they exude after being “peeled”).
It is a product that all preparations be cooked very simply, because the already strong smell of bitter is enough to give it a typical character. The wild onions have a sweet and aromatic scent and a flavor that combines a strong bitter note with a very round and slightly sweet aftertaste.
It has diuretic properties and emollients and among its active ingredient are sugars and mucilage. It is a plant with properties very close to those of the onion, and is used to stimulate the urinary secretions and, for external use, such as emollient and refreshing on irritated skin, dry and pimply.
In the kitchen the underground bulb of this plant is the same uses of onions: raw in salads or cooked as part of sauces or boiled sweet and sour, and is also preserved pickled for appetizers or contours.
It is part of the Foodstuffs Lucan recognized by the Ministry of Agriculture, Food and Forestry.
The Muscari contain flavonoids, many sulfur-rich components, saponins and pectins. They are very rich in potassium, calcium, phosphorus, iron, copper, manganese and magnesi. They also contain sucrose, dietary fiber, glucose and starch.
They have laxative properties, diuretic and emollient properties and are characterized by low calories; the substances contained in it have different properties, including that of lowering the blood pressure, decrease the percentage of fat in the blood and prevent the formation of thrombi.
Among other properties, please note that the lampascioni stimulate the appetite, activates the digestive functions and have an anti inflammatory effect.
They contain mucilage, ie substances which upon contact with water swell and produce a viscous substance. Once ingested this compound is beneficial to our intestines as it has emollient and refreshing.
They have a high content of sulphurous compounds with potential anti-cancer properties which, together with dietary fiber, helps the body to control the levels of bad LDL cholesterol.
ontengono quercetin, a flavonoid whose activity is beneficial to the respiratory tract.
Among the drawbacks of Lampascioni remember not to use or in any case exceed in individuals with liver problems, kidney and in case of ulcers.
Who consumes lampascioni can go meet annoying bloating problems since its intake increases intestinal fermentation.
In the lampascione Apulian tradition is used so curious and interesting is in fact used on earthenware pots when they will crack.
It uses a half of lampascione that is rubbed on the cracked until the mucilage present in the bulb does not go to completely cover the crack. Once the mucilage is dried the pot can still be used for a long time.
100 grams of edible portion provide a caloric intake equal to 37 calories.
The plant is native to North America, for centuries its bulb has been used both for food and for medicinal purposes.
To mitigate the strong bitter taste are left to soak in water for a few hours.
In Salento is used to fry them in such a way that, once opened during cooking, take the form of a flower.
For a long time, popular tradition has assigned to lampascioni aphrodisiac properties but, in the face of scientific studies, were rather bland.
To the world it is estimated there are about 50 varieties of which only seven are present in Italy. Of these seven are grown only a few ornamental thanks to the beauty of the flowers.

Preparation Mode –
In the kitchen it consumes the bulb, preferably harvested before the flowering stem formation, when it is still rich in nutrients.
The bulbs should be cooked whole, but after they have been affected in the lower part (wider one) with a knife, in a different manner depending on the preparation, which can be simple pan, in a pan with the eggs or in oil.
In the first two cases they will be engraved with numerous cuts perpendicular to form a star from the many bits, so that during cooking may be opened as small flowers. In this way they can be baked in a pan with a lid, adding only oil and a little salt, and crushing them slightly with the back of a fork, or soffritti (little), then crushed lightly with a fork and finally united with the beaten eggs with the sole addition a pinch of salt.
Engraved on the other hand with a simple cross, the lampascioni can be boiled in water and vinegar (one part water and a vinegar) with the addition of about two punches of salt per 5 liters of water. Once cooled can be placed in olive oil without other flavors, or with the addition of flavorings such as thyme, oregano and chili.
One of the preparations is as follows: Neptune is the wild onions, removing the thallus and outer skins, they are rinsed and soaked in cold water, which must be replaced from time to time, for at least half a day. They are placed on the fire in a large pot and covered with a mixture of 50 percent water and wine vinegar, salt reasonably.
They let simmer, taking care that they remain still quite firm, then drain and place in glass jars adding to taste a few leaves of mint and garlic; so are coated with extra virgin olive oil and left for a few months before consumption.
The fresh lampascioni can be stored for a maximum of two days in the refrigerator; in case you wish to prolong the conservation must be put oil or vinegar.
From the therapeutic point of view the lampascioni are used against pimples.
The mixture obtained mashing a lampascione and adding a bit ‘of honey can be used to promote the maturation of boils.
ATTENTION: those who are not expert in the field better avoid venturing into the collection of wild onions. When the shoot is still underground, they can be confused with the bulbs of a plant belonging to the same family and extremely poisonous, the Colchico. The plant possesses deadly toxins and there is no antidote.