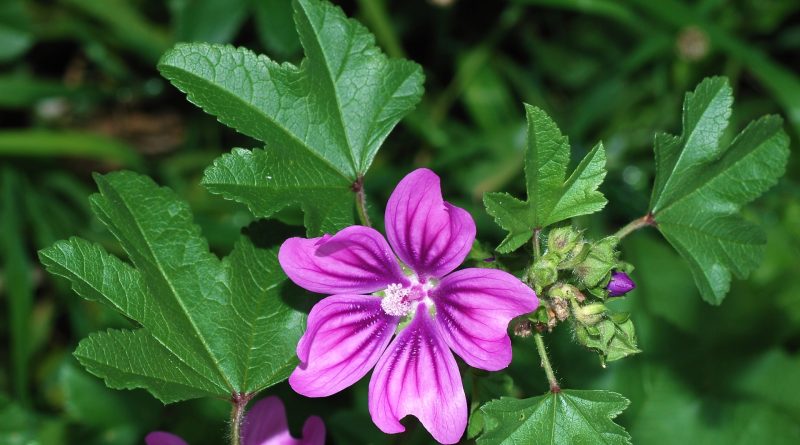 The Common mallow (Malva sylvestris L., 1753) is a plant belonging to the family Malvaceae.

Etymology-
The genus name, the consonant with the greek “Malatto” I rammollisco and “malákhe” emollient, benevolent, with reference to the soothing properties of these plants.
Mallow is also commonly called Varmetta, Riondella, Nalba, Melba, Maleva, Miloghia and Narbighedda. The Malva parviflora grows near fences, along the pathways and old walls and piles of debris, but only in the vicinity of a cultivated field.

Geographic Distribution and Habitat –
The plant is native to Europe and temperate Asia, is present in fields and uncultivated places plain.
Where the whereabouts far from town, it is certain that at that time in that place there was a farm or a house. The Malva grandifolia and other types are usually found in flower gardens or vegetable gardens. Both of these plants contain the leaves, the flowers and stems of mucilaginous substances and tannin. 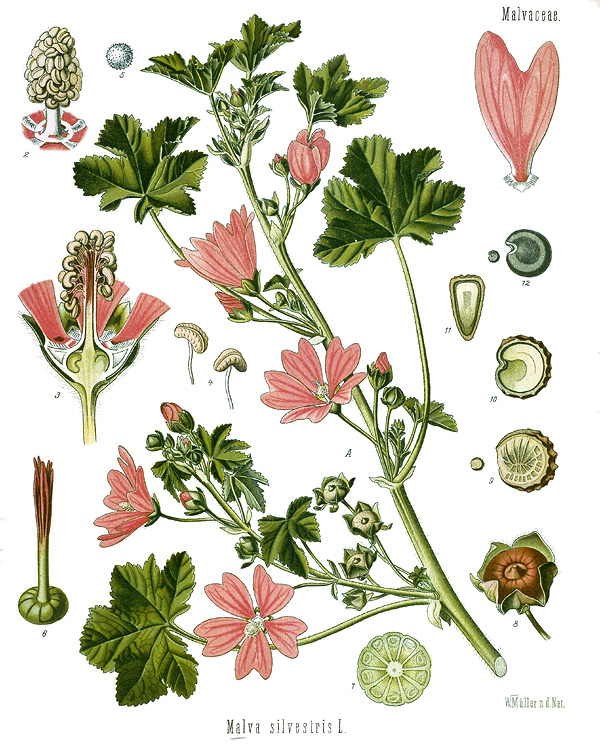 Description –
It is an annual herbaceous plant, biennial or perennial. It has a prostrate or erect stem that can grow 60 to 80 cm. The leaves of palminervia form 5 to 7 lobes and irregularly serrated margin.
The flowers are grouped axils of leaves and sprouting from April to October, the pinkish color with dark streaks, with lobed petals. The fruit is a circular poliachenio.
The Malva parviflora is slightly creepy and a little ‘wood at the beginning of the stem. It has long leaves picchiolate, palminervie and small purple flowers, pink blush. The fruits have the shape of small cheeses. There will be few children grew up in the country who have not tasted or at least played with these fruits in the form of cheese. From June until September we collect flowers, leaves and stems. As with the drying you lose the mucilaginous substances, it is appropriate to use the Malva as fresh as possible. However, even it dried it retains its medicinal properties well enough.

Customs and traditions –
Mallow is effective especially in the form of herbal tea for inflammation of internal mucous namely in gastritis and inflammation of the bladder, in the gastro and stomatitis, so also in gastric and duodenal ulcers. In these cases prepares a soup of Mallow and barley leaves. Before you cook the barley, which, when cooled, add the mallow leaves. Mallow is also an excellent remedy in the lung and bronchial catarrh, cough and hoarseness in the strong, but also in laryngitis, tonsillitis, and in the dry mouth. Not to destroy the mucilaginous substances, the Malva must be made cold bath overnight. As a daily dose they sip two or three cups just heated. It is even a remedy against the stubborn pulmonary emphysema which often is considered incurable and causes severe breathlessness. If they drink at least three cups a day, as we said above, and at night you do compresses on the bronchi and lungs with leaves and flowers sifted and slightly heated.
Excellent results give the bathrooms in the eyes and compresses on the eyelids with lukewarm tea Malva when it happens that rare disorder of the draining of the lacrimal fluid that the patient gets a nagging sense of frustration.
In itchy and irritating allergies facial washes with lukewarm Mallow procure much relief. Externally the Malva is applied on wounds, ulcers, swelling of the feet and hands due to fractures or phlebitis. In these cases they do foot baths or baths of hands (see “Preparation Mode”).
The Malva foot baths are especially useful in fractures of the foot in which you often too tiring causing swelling.
When you are older it is essential to maintain a wounded foot and swollen. Also in this case Youths footbaths Malva and fresh leaves of Plantago. The latter, well washed and still wet, must be applied on the open sore. It will heal in a matter of one night and will not open anymore, even if it was old ten, fifteen and more years.
Our good Malva thus not only eliminates laryngitis, but also tumors of the larynx. In such cases they prepare the evening before two liters and a half, as a daily dose (one heaped dessert herb for each quarter of a liter of water). Heat a little all the following morning and store it so in a thermos flask previously rinsed with hot water. During the day they sipping four cups, the rest is used for gargling.
Mallow, whose habitat is located mainly in the vicinity of farms, is increasingly destroyed. To remove moisture and dirt from the house and also give her the outside look nice spread the habit to surround it with a layer of concrete or a pavement tilted outward.
In this way, however, it detracts from the Malva its traditional place. So goes this great benefactor of humanity.

Method of preparation –
Herbal tea: Only cold maceration! Macerate 1 heaped herb dessert in 1/4 liter of water for one night; the following morning slightly heat the whole.
Footbaths and baths hands: Marinate overnight four handfuls abundant Mallow in a five-liter container filled with cold water. The next day heat the whole up to a bearable temperature in the hands and feet. Immerse them for 20 minutes. The liquid, heated again, can be reused two more times.
Poultices: Heat gently in a bit ‘of the residues of tea water, mix it with barley flour to a pulp; spread it on a linen cloth and lay the heat on the part.