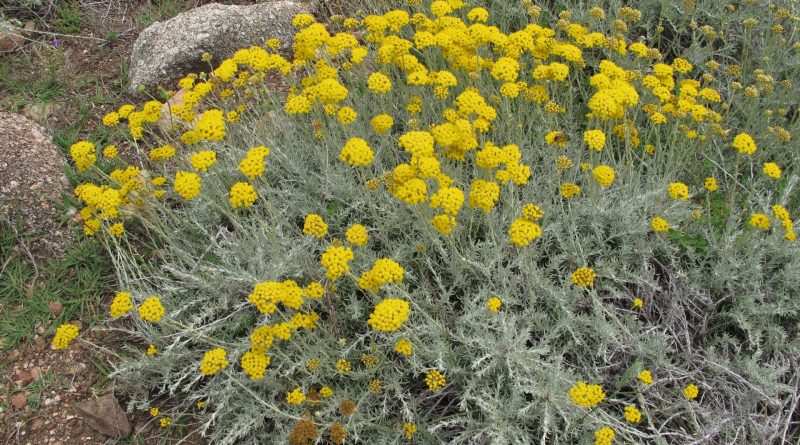 The Italian Helichrysum (Helichrysum italicum (Roth) G. Don, 1830) is a plant of the Asteraceae family. The genus Helicrysum consists of more than five hundred species, distributed between the Mediterranean area, the continent of Africa, Asia and Australia. The most widespread in Italy is dell’Helichrysum italicum.

Etymology –
Helichrysum comes from the greek helios (sun) and chrysos (gold), for the bright yellow color of the flower heads. The common name, Perpetuini, derives from the flower heads of these plants, which are a part of dry scales and involucrali scariose that persist long unchanged.

Geographic Distribution and Habitat –
The Helichrysum italicum has spread to much of the southern Mediterranean. In Italy it is common at the center, the south and the islands. Vegeta in coastal scrublands, on stony, arid and sandy rocky, river shores from the sea to the hills and the little evolved soils, up to 800 m above sea level (Galetti 1400 seconds). It is a very common plant that blooms from July to August. 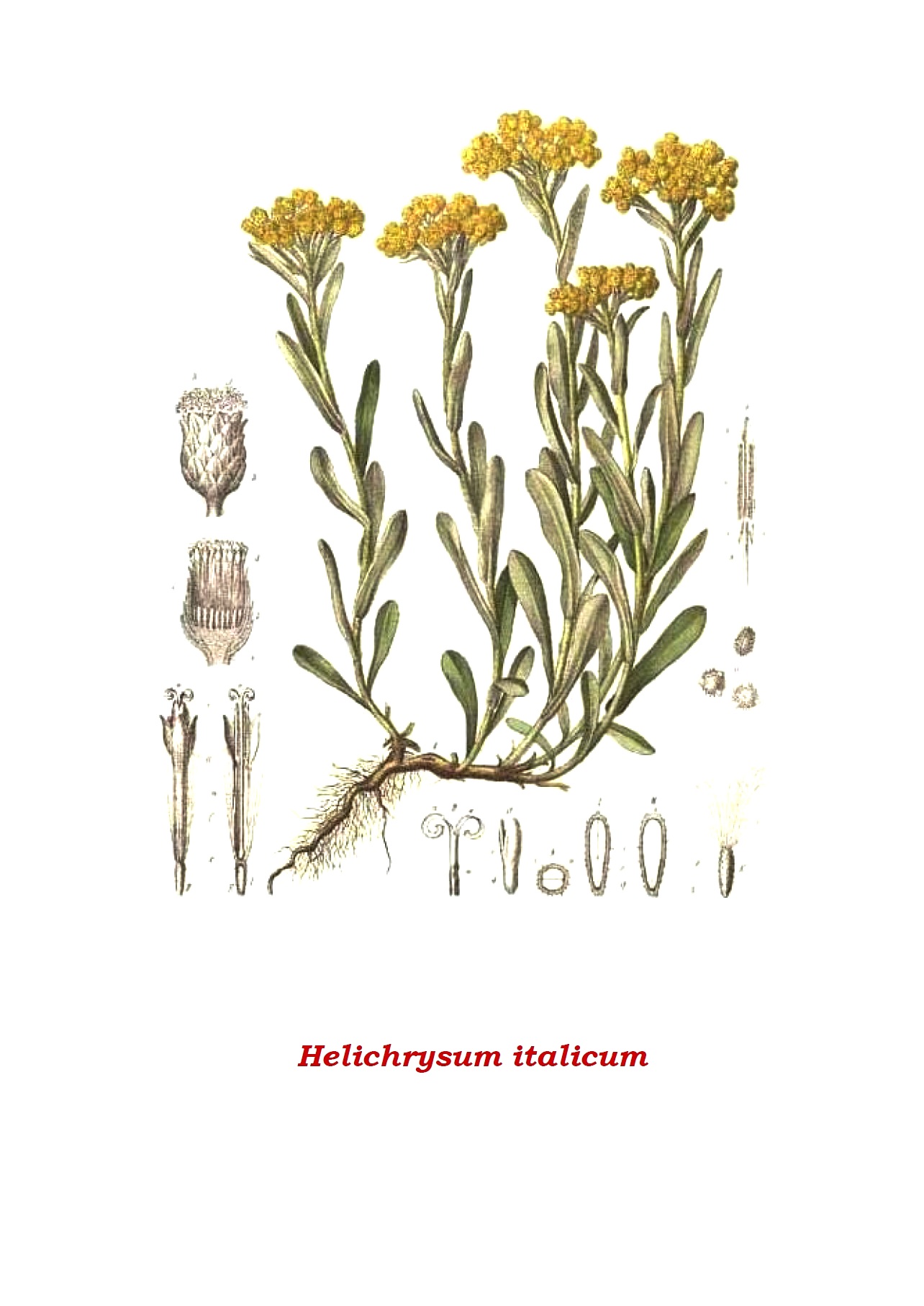 Description –
The Helichrysum italicum is a perennial plant with bushy, 30-40 cm high, of whitish-gray color, tomentosa.
The leaves are alternate, linear, 20-40 mm long and 1 mm wide, covered with fine whitish hairs; They are soft and have margins bent downwards (convolute).
The inflorescence is a corimbo composed of numerous conical heads (each having 12-15 flowers, grouped in 20-30), from yellow-brownish scales, places apex of the stem, with tubular flowers, hermaphrodite, yellow-gold color , which give off a strong smell, pleasant aromatic, sweet and sour, unmistakable.

Customs and Traditions –
Sun and gold are the words that make up the name of this plant and call it the color of its flower heads both stony and sunny habitats of coastal areas and of medium hill in the Mediterranean. Since ancient times, it is known its use for respiratory needs. In Italy it is of particular interest is the clinical-statistical review of the observations of Dr. Leonardo Santini, medical conduit of Garfagnana that starting from the fact that the Helichrysum was used with excellent results in veterinary he documented the efficacy and safety of use even in acute and chronic diseases of the human respiratory system. Surprisingly he observed that patients who also have arthritic and arthritic syndromes, psoriasis and ichthyotic, improved not only from the respiratory point of view but also in dermatological aspects and joint.
A few decades helychrisum anti-inflammatory properties were confirmed by in vitro and in vivo studies, showing that this plant could be used in all diseases where inflammation plays a major role.
In addition to the action on the respiratory function, as an expectorant and bechico, are reported for the Immortelle also properties diaphoretic, analgesic, anti-rheumatic and anti-allergic. The helichrysum inflammatory action appears to be mainly due to the flavonoid component synergistic effect of multiple mechanisms of action including the very important scavenger of free radical activity (especially flavonoids and among them tiriloside).
His qualities were long studied also by Pliny, Geber, Dioscorides, and others who considered him a true panacea for most ills, but I use, not yet fully developed is not recommended on children and women pregnant or breast-feeding.
Its essential oil is used by the cosmetic industry, in perfumes and soaps.
Thanks to the membranous and papery bracts of its flower heads that are able to be kept unaltered even after the dehydration, enters in the compositions of dried flowers for ornamental use.
Its name and its color impression on the ancient peoples to the point to dedicate this plant to the Sun and its twisted flowers to extract necklaces adorned statues of Apollo and Minerva.
It is said that his intense allowed Napoleon to recognize the smell of native soil, even when he was still at sea and out of sight of Corsica, where these flowers are particularly abundant and fragrant.
The main active components are helichrysum: they are flavonoids (isoquercitrina, naringenin, apigenin, tiriloside, luteolin) and other polyphenols such as acetophenones; coumarins; essential oil, caffeic acid, ursolic acid and phytosterols.
For this reason can play anti-inflammatory, antioxidant and antibacterial.
For internal use is used in the symptomatic treatment of cough, acute and chronic nonspecific bronchitis, catarrhal inflammation of the airways.
Check to see if patients are experiencing symptoms of hypersensitivity to other plants of the family Asteraceae (Compositae).
With the flowers dell’Helichrysum italicum is prepared an oil, used in medicine; it is anti-inflammatory, fungicidal and astringent; It gives relief to red, cracked skin. At one time the whole plant was used to burn the bristles of slaughtered pigs, for the particular aroma that gave the lard. The flower parts that retain their vivid color even dried, are used to scent linen and environments. In cosmetics helichrysum is used as a fixative in perfumes.
The helichrysum is an aromatic very versatile, appreciated as an ornamental plant, as an ingredient for a variety of meat dishes or salads, in addition to dried flower arrangements, but also to the many beneficial properties that are used in herbal medicine.
The Helichrysum is often used not only in cosmetics but also in medicine because of its many beneficial and therapeutic properties.
The fact of Helichrysum has sedative properties and stimulating blood circulation, but not limited to: Helichrysum essential oil has anti-inflammatory and astringent properties, and gives relief to red, cracked skin. Helichrysum is also used in the form of decoction to cure diseases such as bronchitis and cough, because of its ability bechica, balsamic and expectorant, but also to relieve rheumatic pains and varicose veins.
In the form of the pack Helichrysum is used instead for the care of irritated and inflamed, for the treatment of chilblains, hemorrhoids skin, but also to stimulate the circulation when we particularly cold hands and feet.
Finally, the leaves of this wonderful plant, whose scent is reminiscent of curry, are also used in the kitchen, to make tasty dishes such as risottos, soups, meat and more, while the dried plants are used instead to scent linen and the environments. In short, it is a veritable wealth of nature.
The everlasting symbol of exile and in the jargon of the flowers takes on the meaning of the desire to be remembered.

Preparation Mode –
The leaves of Helichrysum Licorice should be consumed dried, fresh because they have a slightly bitter aftertaste. To flavor rice, meat, chicken and vegetables: a sprig of helichrysum inserted under the skin of poultry in the oven will give a delicate spicy tone.
Helichrysum is added to the mixed herbs to give it a spicy and exotic touch as the Eastern aromatic Mixed.
You can try adding chopped chutney helichrysum and mixes for pancakes, or put a few sprigs of curry plant in baked chicken.
The dried everlasting flowers are an ingredient in herbal teas.
In fact it is used for internal use as a decoction, to quell the excesses of cough (pertussis), favor the elimination of the bronchial catarrh, quell asthmatic spasms and soothe allergic irritation of the nasal mucous membranes.
For external use as a decoction or oily tincture to treat eczema, dermatitis, psoriasis, rosacea and to prevent and treat sunburn, phlebitis, edema, wounds, scars, sores, hemorrhoids. It is considered a great help to combat neuralgia and neuritis, arthritis, polyarthritis, osteoarthritis and even failure and liver congestion, cholecystitis, pancreatic disorders.
With the Helichrysum italicum you can prepare a oleolito where you use the flower heads (100 g), allowed to dry in ventilated dark place and then macerated in almond oil or extra virgin olive oil (500 ml), so hands to transfer active ingredients soluble oil from the flowers.
They put the dried flowers in a dark glass jar, equipped with airtight lid. Then you add the oil, up to cover them completely, making sure to turn the macerated each day to prevent mold growth. After about 40 days, you can filter the oil, through a light cloth, or gauze. Squeeze the residue, and if you want a pure oil, you can operate a second filtering, using a cotton gauze, so that the fibers capture the latest impurities. The oleolito thus obtained is kept in a dark glass bottle in a cool place and possibly indoors.