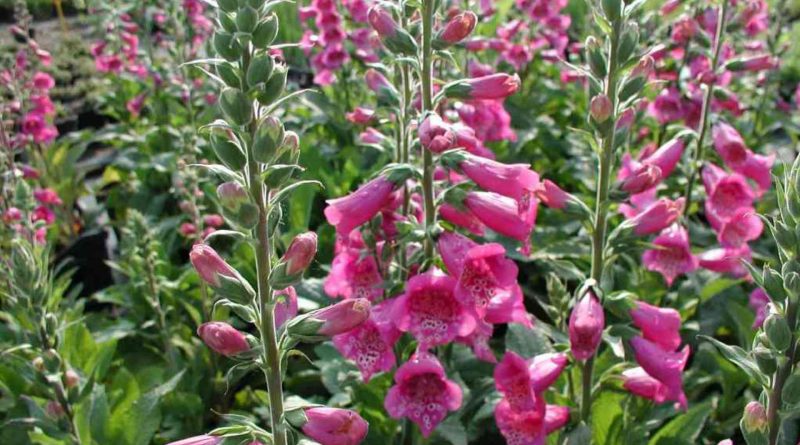 The foxglove (Digitalis purpurea L., 1753) is a herbaceous plant of the family Scrophulariaceae. It is the best known species of the genus Digitalis.

Etymology –
The significance of this kind is reported to its shape thimble while the species obviously alludes to the color of the flower.
Digitalis is derived from Latin term that refers to the shape of the flower: in fact resembles that of a thimble; it seems that this name should at Leonhart Fuchs (Wemding, January 17, 1501 – Tübingen, May 10, 1566) which was a German botanist and physician.

Geographic Distribution and Habitat –
It grows in wild places in acidic soil, especially in sunny intervals in hardwood forests and fields of acidic soil rich in humus from 200 to 1600 meters.
In Italy it is present with more frequency in Sardinia. More sporadic in Lombardy, Liguria, Emilia Romagna, Alto Adige, Veneto and Calabria perhaps escaped from cultivation in the garden. 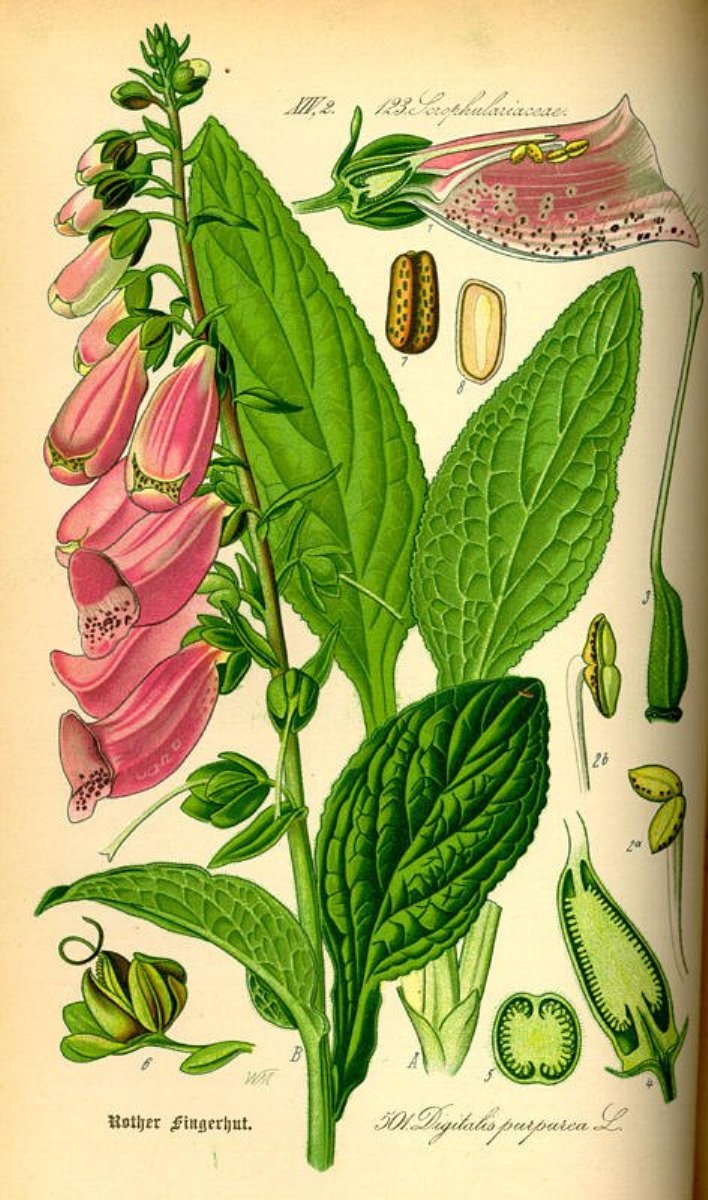 Description –
It is a biennial herbaceous plant. The leaves are arranged in a spiral, simple, 10-35 cm long and 5-12 cm wide, gray-green color, curves downwards, with a finely serrated margin; in the first year they form a tight rosette at ground level.
The stem blooming develops in the second year, and reaches a height of 1-2 m.
The flowers are arranged in terminal clusters, and are tubular, pendants, reddish-purple (but there are varieties in which the flower is pink, yellow or white).
The fruit is a capsule that reached maturity opens releasing numerous very small seeds (0.1-0.2 mm).

Customs and Traditions –
The use of extracts of Digitalis purpurea in the treatment of heart failure was described for the first time by William Withering.
The leaves of this plant fact contain some pharmacologically active glycosides (digitoxin and digoxin) that have powerful effects on the heart, increasing the force of heart muscle contraction (positive inotropic effect) and have antiarrhythmic properties. They are mainly indicated in the treatment of heart failure; However, the same substances, if taken in excessive doses, can cause serious problems, such as arrhythmia and cardiac blocks, sometimes lethal. It is inserted in the list of wild medicinal plants subject to the provisions of the law January 6, 1931 n. 99.
The digital is a classic example of a drug derived from a plant once used as a remedy in traditional medicine: in herbal medicine has abandoned its use because of its narrow therapeutic index and the difficulty in determining the active dose. Initially, having held that the usefulness of digital in regularizing the wrist, the plant was used to treat a number of diseases, including epilepsy and other seizure disorders. Now for these indications the use of digital is considered inappropriate.
Like other cardiac glycosides, the active ingredients of Digitalis exert their action by inhibiting the activity of sodium-potassium ATPase. The inhibition of Na + / K + -ATPase in turn causes not only an increase in intracellular Na +, but also of calcium, which in turn produces an increase in the strength of the heart muscle contraction. In other words, at the right dose, the toxin of Digitalis may be greatly increasing your heart rate.
However, digitoxin, digoxin and many other cardiac glycosides, such as ouabain, are known because they are able to make steep response curves to the dosage, ie a slight increase in the dosage of these substances can make the difference between a harmless dose and a fatal. It also has a vagal effect on the parasympathetic nervous system, and as such is used reentrant cardiac nell’aritmia and to slow the ventricular rate during atrial fibrillation.
The digitalis intoxication resulting from overdose can occur with a vision jaundiced (yellow) and with the appearance of blurred outlines (halos), and bradycardia; Symptoms also include nausea and vomiting. The possible occurrence of atrioventricular block can lead to cardiac arrest and death.
The pharmacological products consisting of digitaliche molecules of natural derivation (Digitalis purpurea) or synthetic – have a very low therapeutic index: in simple words, it means that the boundary between the therapeutic dose and the toxic is very thin, therefore, dosages must be scrupulous and attentive, and the patient who undergoes digitaliche care must be constantly monitored. However, symptoms of toxicity induced by administration of Digitalis purpurea extracts are very frequent.
It is estimated that only 40 grams of fresh leaves of Digitalis purpurea can kill a man: the lethal dose decreases to 10 grams for the dried drug.
A fresh leaf, containing approximately 80% water, may be constituted by a variable amount of glycosides, generally between 1.6 and 4.8 mg, in addition to saponosidiche molecules (capable of altering the absorption of glycosides in the intestine).
The leaves of wild plants are richer in active ingredients than cultivated. They collect leaves cauline at flowering time, possibly after noon or dry weather.
The medicinal properties of Digital were not known to the ancients. Despite the fact that in Italy, Greece and Asia Minor to grow different species of Digital containing cardiotonic glycosides, these were not used by Greek and Roman physicians. Since for many centuries medical knowledge was based almost exclusively on the texts of Dioscorides and Pliny also throughout the Middle Ages and the Renaissance the medicinal virtues of Digital were ignored. Mattioli does not name in his writings, Fuchs considered the equivalent of Gentian. In 1785 W. Withering Birmingham doctor, he is having learned from an old healing the use of digital and after having experienced for ten years, promoted their use and in particular the activity on the heart. Employed with overdoses and inaccurate indications fell again into oblivion. Only in 1842 R. P. Debreyne pointed at him definitely as a heart tonic. Since then many researchers studied the drug. In 1845 Homolle and Quevenne prepared digitaline amorphous; In 1874 Schmiedeberg pulled four products, digitalis, digitoxin, the digitaleina and digitonin. These last two substances, resulted following a single substance. Kraft and Hartung in 1912, Windaus and Schneckenburg in 1913 and other authors isolated other products. A. Stoll and W. Kreiss for last in 1934 showed that many of these substances are not that cleavage products of primitive glycosides content in the leaves.
Giovanni Pascoli in the poem dedicated to this plant writes “an ear of flowers, or rather fingers, spruzzolate blood, human fingers.”
Even in a painting by V. Van Gogh, “Portrait of Dr. Gachet” is a digital.
For its beauty D. purpurea is grown as a garden plant for the formation of large flower beds or potted plants.

Preparation Mode –
Before starting the latter part is stressed as the preparation of Digitalis purpurea, for all the considerations we have made here, it is to be avoided absolutely.
The leaf powder is used at 0.20-1 g dose within twenty-four hours on maps or in pills or in infusion or maceration. The infusion or maceration can not keep for more than a day because they tend to decompose. The fluid extract is taken at a dose of 0.05 to 0.50 g in the day. The alcoholic tincture prepared with zoo g per liter of alcohol is taken at a dose of 5-10 drops up to 5 g pro die (one drop corresponds to about 0.01 g of leaves).
The preparation of homeopathic Digitalis uses the dyeing obtained with the leaves of the second year collected a bit ‘before flowering.
Toxic doses vary widely because it is difficult to calculate the amount of “active ingredient” present in the leaves. In general it is believed that 10 g. of dried leaves or 40 g. Fresh leaves can cause death in a man.
All this has, over time, dropped the use of “DIY” of this plant, which remains dangerous because, a priori, it is impossible to know the extent of the active ingredients in the leaves, varying amounts in relation to exposure solar, soil and other factors. The best advice is to “avoid so in the strongest terms” how to prepare herbal teas or infusions made from digital, or otherwise use parts of the plant, as this use could prove not only toxic but even deadly!
Even when purchasing medication in pharmacies (to be done only after consulting your doctor and specialist in precise prescription), you should carefully read the package insert to verify all the side effects and interactions with other drugs. In the event of signs of nervousness, nausea, increased heart rate, cardiac symptoms or any other unusual side effects suspected, contact your doctor or pharmacist as you may be experiencing overdose.