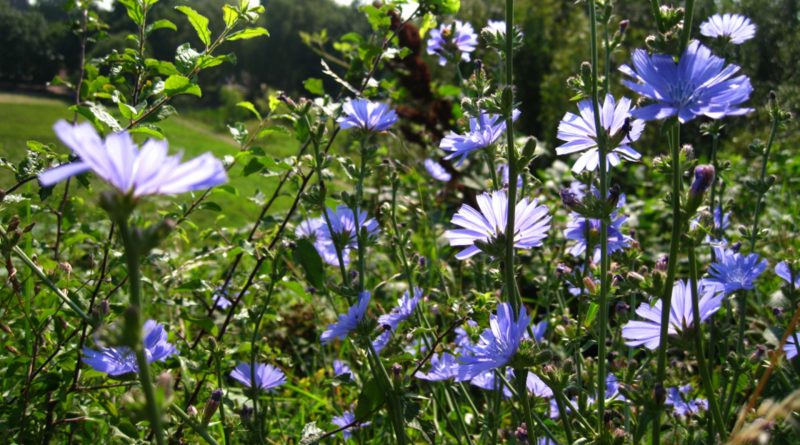 Common chicory (Cichorium intybus L., 1753) is a herbaceous plant, perennial with brightly colored flowers, belonging to the Asteraceae family. They are perennial plants by means of gems placed at ground level and with elongated flowering axis, often without leaves.

Systematic –
From the Systemic point of view, the common chicory belongs to the Eukaryota Domain, the Kingdom Plantae, the Tracheobionte Subordination, the Spermatophyta Superdivision, the Magnoliophyta Division, the Magnoliopsida Class, the Asteridae Subclass, the Asterales Order, the Asteraceae Family, the Subfamily Cichorioideae, the Cichoriaae Tribes, the Cichoriinae Subtribution and thus the Genera Cichorium and Species C. intybus.

Etymology –
The source of the generic name (Cichorium) of this plant is dubious and complex. It is likely to be an ancient Arabic name that could sound like Chikouryeh. According to other sources, it seems to be derived from an Egyptian name Kichorion, or perhaps also by the combination of two terms Kio (= io) and chorion (= field); The ancient Greeks, for example, called this kichora plant; But also kichória or kichÃ¨reia. It may be that the Arabs have taken the name of the Greeks, but it is not certain.
The difficulty in finding the origin of the name of the plant lies in the fact that it has been known since the earliest times of human history.
The name of the species (intybus) comes from the Latin but the origin is in turn from the Greek éntybon with which a grass similar to chicory (now generally called “scariola grass”) was indicated. The scientific combination was definitively fixed by the Swedish botanist and naturalist Carl von Linné (1707 – 1778) in the Species Plantarum publication of 1753; But before that, this plant was called differently: Intubum sylvestre or Intubum sylvestris; Just before Linneo began to use Cichorium’s own name constantly.
The English call this Chicory plant, the French call it Endive witloof but also Chicorée and the Germans Wurzelzichorie or Cichoriensalat but also Wegwarte.

Geographic Distribution and Habitat –
The distribution of this plant is cosmopolitan, that is, relevant to all parts of the world; But it can also be called Paleotemperate, that is, relative to the temperate zones of Eurasia and North America and hence can also be called Eurasian.
In Italy it is frequent throughout the national territory although less frequent on the central side of the Tyrrhenian Sea and in the south; In the rest of the world, as it is said, it is found on all continents.
Its habitat is the margins of paths, cultivated fields, uncultivated land, rubble areas and ruderal environments, meadows, but also anthropic areas; Also being a cultivated plant is found in industrial orchards and crops. The substrate can be both calcareous and siliceous, soil pH is baseline with average nutritional values ​​in dry conditions.
The altitude diffusion goes from the plane up to 1200m s.l.m .; Is present in the hilly and mountain vegetation. 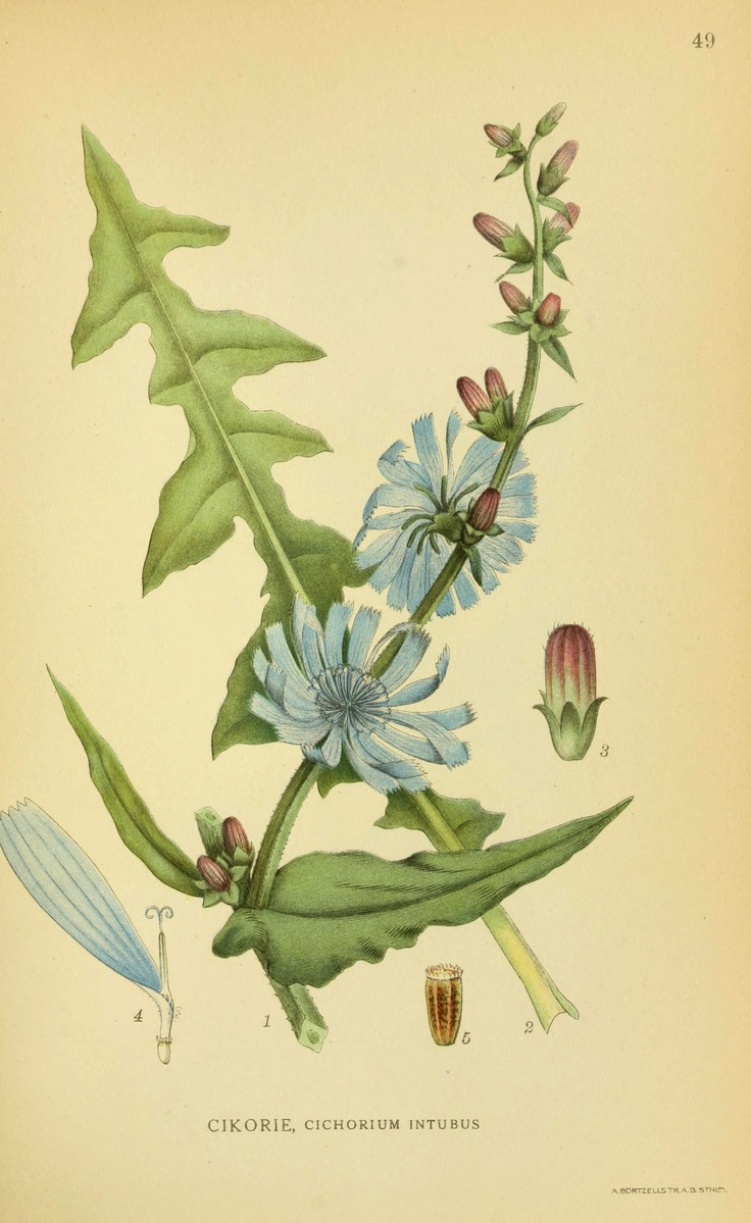 Description –
Cichorium intybus is a herbaceous plant, native to Eurasia and North Africa, belonging to the Asteraceae family. It is a biennial plant that in the first year forms a rosette of basal leaves. In the second year, a branching, hollow and angular flowering flower is born between 1 and 2 m in height. Basal leaves are piny and deeply engraved with sharp teeth. The flowers are ligated in a light blue color and collected in capsules of a diameter of 2.5-4 cm. The fruit is an achenio. The root is of a fussy, fleshy and bitter taste. Of chicory there are numerous cultivated varieties for food and selected for different uses: a) green leaves and cut (eg sugar pan); B) leaves and stems (catalog and puntarelle); C) root (Soncino chicory) d) to force (Brussels chicory).

Cultivation –
The cultivation of chicory is very easy, and this explains its planetary distribution. However, it is preferable to plant it in the sun, even if it tolerates shading. It is a rustic plant that survives to temperatures of -15 ° C. If it is implanted in deep soils, it tolerates drought, but fears water stagnation. At the climatic level it is not very demanding even if it prefers rainy summers and winters dry and not too rigid.
It does not have particular preferences at ground level, although it is advisable to plant it in loose, deep and well-drained soils with organic matter. The soil reaction should preferably be alkaline, as acidic soils increase crop growth.
If you want to cultivate Cicoria for medicinal purposes, the varieties available on the market are only for the cultivation of vegetable crops and therefore not suitable for cultivation as a herbal plant.
Cultivation of the plant has different durations in function if grown for the root or leaves.
In root crops there are cycles of 2-3 years
In leaf crops it’s only a year to get a good leaf production.
However, soil should be prepared in the autumn, with a deep plowing and subsequent secondary machining such as harrowing, so that it has a good nesting of it and an optimal seedbed in spring. With autumnal processing it is recommended to fill 1-2 q of mature manure. It is always advisable to use synthetic fertilizers for ecological and food considerations made in other parts of the site.
The plant can be made with direct sowing. For leaf cultivation: from late March to May in files using 25-40 g seed / 100 m2 or spaghetti using 37-45 g. For root crops: from May to October, using 100 grams of seed / 100 m2.
The transplant should be carried out from May to August when the seedlings have 4 leaves; In this way they will not flower before the 2nd year of cultivation.
Crops can consist of manual or mechanical cuts in the files (depending on the size of the investment) to combat the dung and the irrigation when needed.
From the point of view of plant protection there are reported on this cultivation of ophiomyia pinguis (Ophiomyia pinguis).
The harvesting technique can be carried out with mulching machines, slices, slices or scissors (depending on the size of the cultivation) when the leaves reach the length of 5-10 cm. On average, 3 collections per year are made with yields of 150 kg / 100 m2 fresh product of 23 kg / 100 m2.
Seed collection is carried out in July with yields of 2-2.5 kg / 100 m2.
Root collection is done through a hollow digger or plow, between September and November, when leaves yellow. The yield in roots is about 200 kg / 100 m2.

Methods of Preparation –
The flowers of Common Cicoria occur in the spring season, during which the leaves, which were born in the autumn and which resisted the winter, dry themselves. For medicinal purposes, leaves are harvested before flowering, while chicory roots gather throughout the summer. Such parts of the plant are used for the preparation of decoys and syrups, as well as facial creams suitable for counteracting redness.
Generally, decoctions are used or syrups are formed; From the properly cleansed leaves you can get a refreshing face cream (which fights redness precisely).
The content of some chicory caffeine derivatives has probably led to its use for the preparation of coffee-like drinks, in the absence of well-known and aromatic grains, especially in the past centuries and during the war years of recent decades. The use of chicory roots for the preparation of a coffee substitute beverage is traced back to 1600.
From a culinary point of view, the most common use of chicory is its leaves, to be added fresh in the preparation of salads. The chicory leaves can be consumed in any case both raw and cooked and their harvest is preferable before flowering, as the chicory leaves are likely to dry easily after the appearance of the flowers. In regional cuisine, this ingredient is the protagonist of chicory and potato dishes and a special purée of beans and chicory, typical of Apulia.
The use of chicory in the kitchen invokes regional and popular tradition, the harvest of spontaneous herbs and the customs associated with country life. From the fresh chicory leaves a digestive juice is obtained. From the leaves of chicory left to macerate a natural decoction is obtained instead of chronic constipation. The ancient populations used chicory to cure the liver and against the stomach burners.
Cicoria prepares the Bach Chicory Flower (Bach Number 8 Flower).
This remedy is considered suitable for those who are very attentive to the needs of others, who tend to take excessive care of their friends and relatives and who would always like the people they love; This is a set of behaviors that can hide excessive possessiveness and could be re-balanced thanks to the use of this wild chicory Bach flower.
However, be careful that, unlike what one can commonly believe, chicory presents some contraindications that it is important to take into account. Chicory in particular is not recommended during pregnancy because it has a uterine-stimulating effect.
Chicory is contraindicated in the case of gastritis or peptic ulcer: the generous presence of inulin makes it unconvinced in case of abundant intestinal fermentation. In such cases, high dosage and prolonged periods of intake are not recommended.
Chicory may have as a side effect the reduction in absorption of certain drugs, especially beta-blockers, which are used to lower blood pressure and regulate heart rate. Finally, it can be contraindicated to those who suffer from gallbladder calculations.