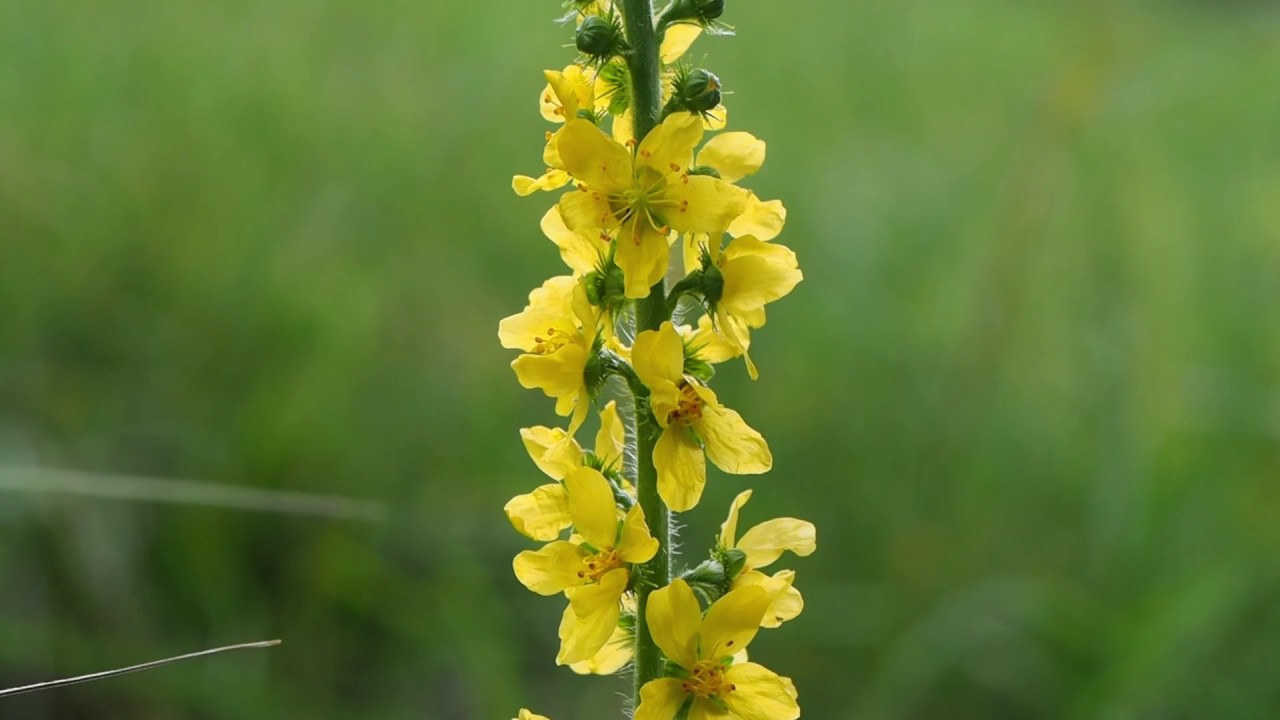 The Agrimonia (Agrimonia eupatoria L.) is a perennial herbaceous plant with a small rhizome from which a free upper leaves erect stem up to 80 cm.

Etymology –
The genus name apparently derives from the greek “árgemon” = “leucoma eye”, the name of a species of poppy used in antiquity against a sore eyes said “arghema”, this indicates that the properties attributed to the plant in the treatment of ocular diseases; “Eupatoria” however, comes from the ancient “Eupator” moniker, that is of noble birth, given to King Mithridates of Pontus (123 to 63 BC) of great scientific culture man, who first could recognize the virtues. Some argue that the specific name of the plant, it can also result from “hepatoria” since the plant would be active on the liver.

Geographic Distribution and Habitat –
It is widespread in much of Europe, south-east Asia and North America, to Mexico. In Italy you can find both in mountainous areas, on the edge of woods and pastures, in zones with Mediterranean climate, especially in open areas, dry and sunny.
It is very common species in the Mediterranean maquis areas in the meadows on the edge of the woods, in open, sunny places. 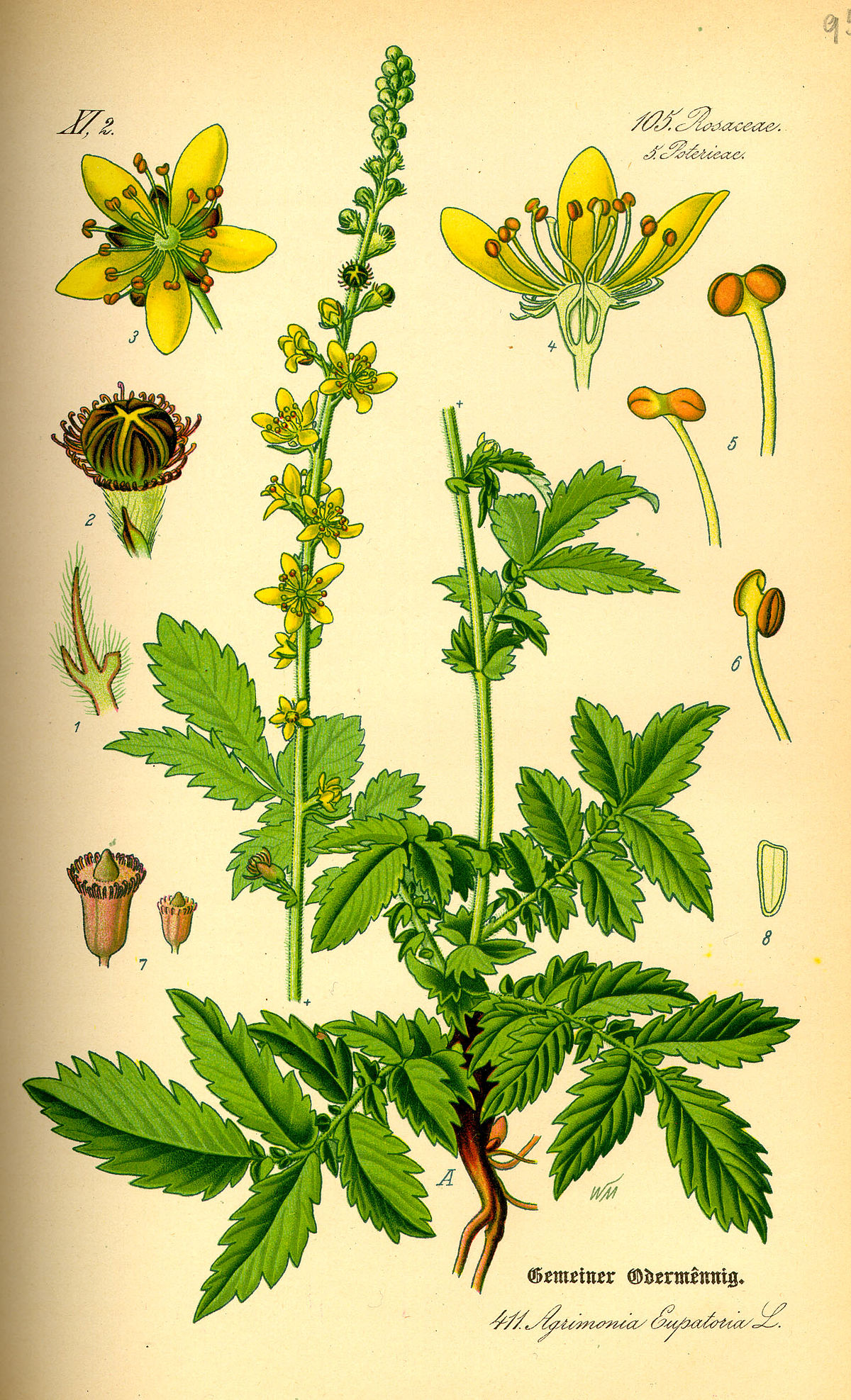 Description –
The leaves, whitish on the bottom and green in the upper have serrated margins and have the basic two leaves of different shape (stipules) wrapped around the stem.
The inflorescence is composed of many small yellow flowers, each having a cup of five pieces attached to a tube that has an apex corolla with five yellow petals.
The fruit is composed of two achenes enclosed in the glass tube. Thanks to the presence of hooks, sticks to the fur of animals that pass nearby, favoring dissemination also in distant areas.

Cultivation –
The agrimony is a fairly common plant throughout Italy, especially in dry and sunny open spaces, is located in the woods and pastures is in the vicinity of the sea is in the hills or mountains.
It can be found in Europe, North Africa, South and North Asia.
Blooming in early spring until autumn.
The leaves should be harvested before flowering or if interested in the aerial part; if you decide to use the dried product this must be done in the shade or in dry or heat (temperature not exceeding 40 °), the dried plant has a pleasant smell of apricot.
However, it is possible to grow in soils, even drought, by seed, taking care to make it grow in the same habitat where it is spontaneous.

Customs and traditions –
It is known for its medicinal properties already in Pliny the old times, used for liver diseases.
The various components that are found in this plant gives it anti-inflammatory properties, astringent, healing, diuretic, hemostatic, analgesic.
The agrimony is a plant whose customs and first records date back to the prehistoric man, given the remarkable features, the greatest civilization that wrote our history have used both for healing purposes is food, there have been kings or doctors who have used it for magical rituals is like poison both to soothe the wounds of war.
The writings today allow us to know that among the many admirers of this plant was king of Pontus Mithridates Eupator (I-II sec.) BC, the greek Dioscorides, St. Hildegard (sec. X), who used it as a remedy for fever and amnesia or other mental illnesses.
The Agrimonia appears to have been used since ancient times, because they were found large quantities of fruit in neolithic stations, making us understand so that in prehistoric times the man recognized in this plant great healing and food quality.
The Egyptian doctors were using the juice, filtered, to treat the eyes against excessive tearing so much so that in some papyrus is called Lagrimonia, plant that makes eyes water.
Ophthalmic properties of the plant are also reported in several herbaria.
The Dutch botanist Boerhaave of the eighteenth century, prescribed in gargle against bronchitis and angina.
In traditional peasant folk medicine among whom are some beliefs of Sicilian origin, they reported the use of the plant for Hepatobiliary disorders and the affections of the throat and mouth.
The wraps of fresh leaves were used to relieve bruises and sprains.
The whole plant collected during flowering, it could extract a golden-yellow dye used for coloring of the wool is also an excellent remedy against the snake poison.
Once the dell’agrimonia flowers were also used to dye your hair bright yellow.
In particular, the flowering tops are used against liver failure. It is then used as a stimulant of bile flow and in catarrhal enteritis, as well as general detoxifying and decongestant. The can be used, for external use, against conjunctivitis, inflammation of the oral cavity and the nasal and especially against many diseases of the skin, thanks to the presence of a substance, ursolic acid, which has an activity comparable to cortisone.
It is a herb bitter, rich in tannin, resins and especially salicylic acid, slightly astringent, tonic, diuretic, anti-inflammatory, anti-haemorrhagic; as mentioned improves liver function and bile.
For internal use, always used against kidney disease ulcerative dyspepsia, diarrhea, food allergies, gallstones, cystitis and rheumatism.
For external use it is useful to counteract rash, small injuries, against oral inflammations, conjunctivitis and haemorrhoids.
In northern Europe the infusion, which has a pleasant taste, is used as a common stimulant tea.
The active ingredients are contained in the flowering tops and leaves. The leaves and flowers are harvested in June / July.
It can be used as a decoction orally, as antidiarrheal and as a mouthwash for inflammation of the mouth; infused as a purifier of the organism, as a spasmolytic in gastrointestinal colic, as hypoglycemic. Joined horsetail stems and whole plant of doorweed in case of hematuria and kidney inflammation. It is used as an infusion for external use, in mouthwashes for sore throat and in packs of sprains and bruises. Finally as oleolito applied topically against shingles (herpes zoster).

Method of preparation –
Throat inflammation: boil 40 grams. of leaves in 500 ml. of water and gargle.
intestinal catarrh: preparing infused with 2 gr. of flowers in 100 ml í. of water. Consume 2-3 cups a day. Lumbago: boil 30 grams. of flowers in 1 liter of water with the decoction and take hot baths and wrap them with the wool.
Bruises and acne: Collect an adequate quantity of fresh leaves, chop, mash and apply in the stakeholders by means of compresses.

posted on 03/15/2017
Sources
– Wikipedia, the free encyclopedia.
– Treben M., 2000. The Health from the Pharmacy of the Lord, tips and experiences with medicinal herbs, Ennsthaler Publisher
– Pignatti S., 1982. Flora of Italy, Edagricole, Bologna.
– Conti F., Abbate G., Alessandrini A., Blasi C. (ed), 2005. An annotated checklist of the Italian vascular flora, Palombi Editore.
Please note: Pharmaceutical applications and alimurgici uses are indicated for information purposes only, do not represent in any way a medical prescription; it accepts no liability on their use for therapeutic purposes, cosmetic or food.