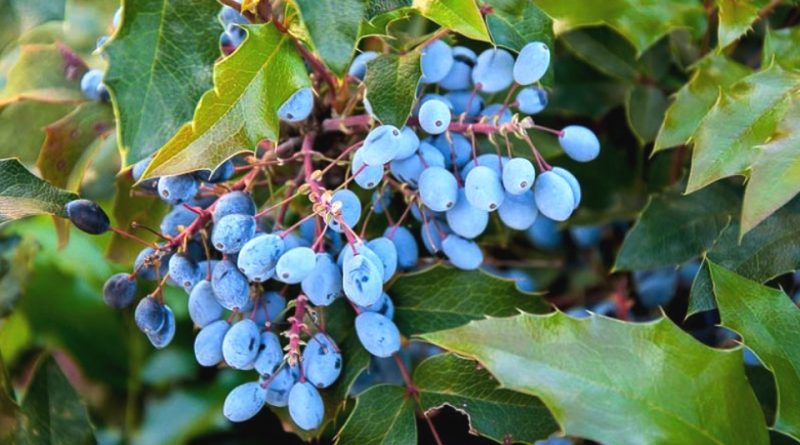 Etymology –
The term Mahonia of the genus was dedicated to Bernardo Mc Mahon (~ 1775-1816), an Irish horticulturist who emigrated to North America.
The specific epithet aquifolium comes from Ilex aquifolium holly: with leaves similar to those of holly.

Geographic Distribution and Habitat –
Mahonia aquifolium is a plant native to western North America; present from southeastern Alaska to northern California and from eastern Alberta to central New Mexico.
Its habitat is that of the undergrowth of Douglas fir forests (although other types of forest contain the species) and in the thickets of the Cascades, Rocky Mountains and northern Sierra, at altitudes of up to 2,000 – 2,100 meters.
Furthermore, in some areas outside its original range, M. aquifolium has been classified as an invasive exotic species that can replace native vegetation. 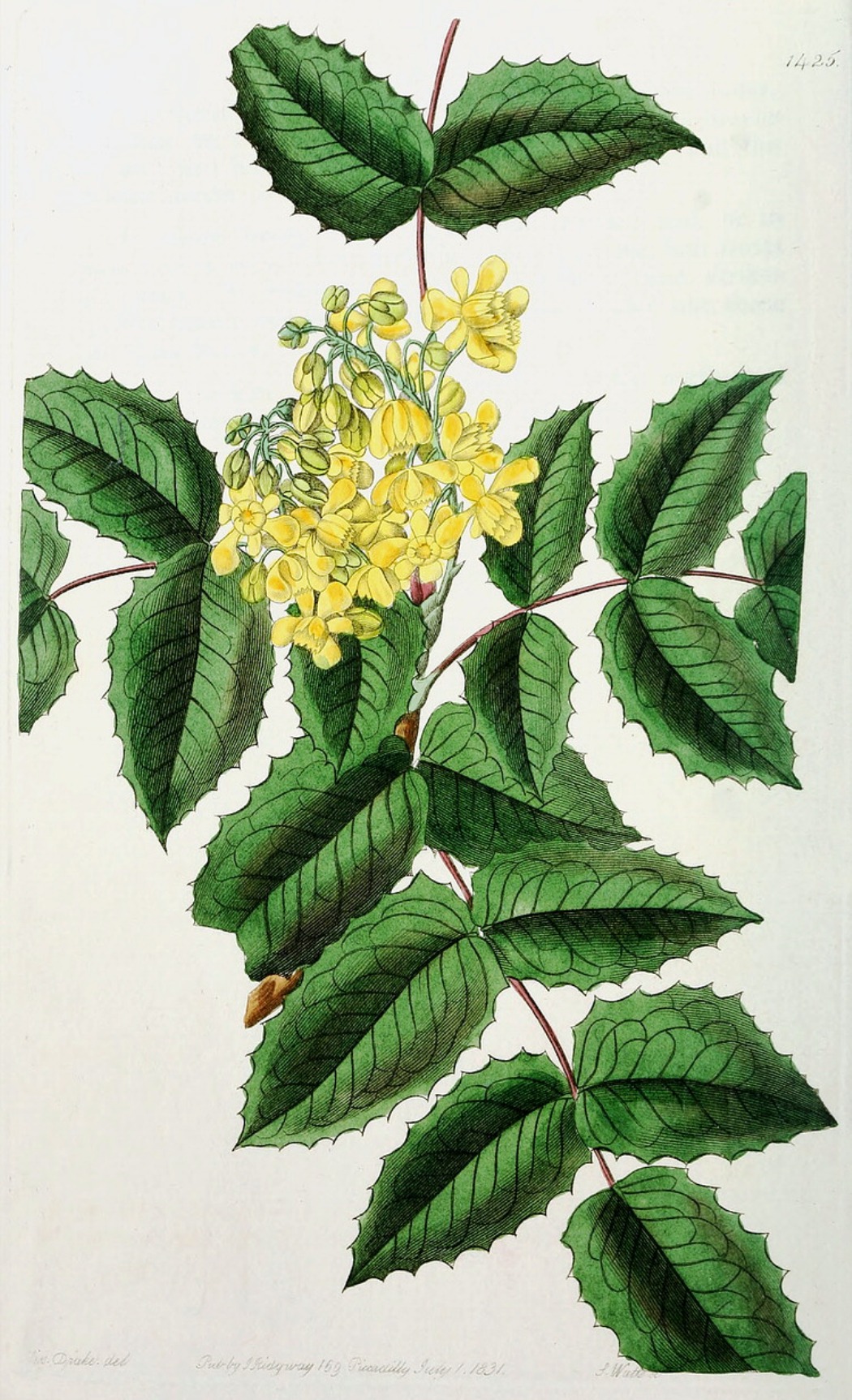 Description –
Mahonia aquifolium is an evergreen shrub that grows up to 1–2m high by 1.5m wide.
The leaves are pinnate, up to 30 cm long; each leaf is composed of thorny leaflets. The leathery leaves resemble those of holly and the stems and twigs have a thickened, corky appearance.
The flowers are carried in dense clusters in late spring and are yellow in color.
The fruits collected in clusters are bluish or black berries, pruinose and often glaucous of 6-9 mm. Trine seeds, brown, 1-7 mm.

Cultivation –
Mahonia aquifolium is an evergreen shrub that is harvested in nature for local use as a food and medicine.
The plant lends itself to cultivation and is very tolerant, capable of growing in various types of climate. Plants are hardy down to around -20 ° C.
In general it is a very easy plant to grow, which thrives in any soil even if it prefers acidic soils and grows well in heavy clay soils and also in dry soils if given a good mulch every year.
It should be cultivated, if possible, in partial shade areas, but it can tolerate full sun and thick shade under the trees.
This plant does not like exposure to strong winds and is very tolerant to pruning which must be done in the spring.
It is also a polloniferous species.
As far as propagation is concerned, this can be done by seed, with sowing that must be carried out as soon as the seed is ripe in a cold greenhouse.
It usually germinates in the spring. The “green” seeds (harvested when the embryo has fully developed but before the pulp around the seed has dried) must be sown as soon as harvested and germinate within 6 weeks.
Stored seeds should be sown as early as possible in late winter or spring. Cold stratification of 3 weeks will improve their germination, which should take place in 3 – 6 months at 10 ° C. the transplant is then carried out in spring or early summer.
Propagation can also take place by division of suckers in spring. These, while they can be placed directly in their permanent locations, do best when kept in pots and placed in a greenhouse until fully established.
Finally, leaf cuttings can be prepared in autumn.

Customs and Traditions –
Oregon Grape is a plant that has achieved a high reputation in treating various skin conditions and is harvested in nature in large quantities for use in the production of skin creams. The plant is also commonly grown as an ornamental, where select cultivars can be used for ground cover and hedges.
This species, where cultivated, has been introduced in many areas as an ornamental but regularly escapes cultivation in private and public gardens to form spontaneous woody vegetation.
It can also compete with native species thanks to its reproductive system.
Mahonia aquifolium is a plant in which all parts contain the alkaloid berberine: this is more concentrated in the roots, stems and inner bark, and less concentrated in the fruits. Berberine, in small quantities, has a wide range of effective medicinal applications but, in excess, it can cause vomiting, lower blood pressure, reduced heart rate, lethargy and other negative effects.
The fruits of most, if not all, members of this genus are more or less edible and can be consumed in quantity as the levels of berberine contained in them are very low.
The flowers of this plant are delicately scented and various cultivars have been made from this species for ornamental purposes.
Mahonia aquifolium also has edible uses.
The fruits have a sour taste, but they are pretty good raw and are especially palatable when added to a porridge or muesli.
Unfortunately, they contain little pulp and have many seeds, although some plants have larger, juicier fruits.
The cooked fruits taste a little bit of black currant; the fruits can also be dried and stored for later use.
The flowers can also be used to make a lemonade-like drink.
Mahonia aquifolium has, as mentioned, also medicinal use so much that it was once used above all by various Indian tribes of North America to treat the loss of appetite and weakness.
Today it is still a popular remedy in modern herbal medicine, being used mainly in the treatment of gastritis and general digestive weakness, to stimulate the function of the liver, kidneys and gallbladder, and to reduce catarrhal problems.
Extensive studies have shown that a cream containing root or stem extract is a safe and effective treatment for psoriasis and other skin conditions.
The root and root bark are alterative, antibacterial, antioxidant, blood tonic, cholagogue, diuretic, laxative and tonic. It improves digestion and absorption and is taken internally to treat psoriasis, syphilis, bleeding, stomach upset and unclean blood conditions.
It can also be used for external use in the form of a cream to treat skin conditions such as psoriasis, while a decoction has been used as a gargle to treat sore throats and as a wash for blurry or red eyes.
The fruit is an excellent gentle and safe laxative.
In Germany, several studies have indicated that Mahonia aquifolium exerts anti-psoriasis activity by inhibiting the anti-inflammatory and hyperproliferation of keratinocytes, and that alkaloids may be responsible for the anti-psoriasis activity of this plant.
Phytochemical research on this genus has led to the identification of over 150 chemical constituents, among which alkaloids are predominant. The isolated compounds and crude extracts have been shown to exhibit a broad spectrum of pharmacological effects in vitro and in vivo, including antimicrobial, anti-inflammatory, hepatoprotective, antioxidant, antimutagenic and analgesic properties.
Berberine, an alkaloid universally present in the rhizomes and stems of Mahonia species, has been shown to have a marked antibacterial effect and is also used as a bitter tonic.
Since it is not appreciably absorbed by the body, it can be used orally in the treatment of various enteric infections, especially bacterial dysentery.
Berberine also showed anticancer activity.
It should be emphasized that this plant should not be used with Glycyrrhiza species (Licorice) because this cancels the effects of berberine.
Among other uses, Mahonia aquifolium is used as a low ornamental hedge that does not require pruning.
The plant can be useful for erosion control. It has a high tolerance to chemical pollutants and a favorable root morphology, which means it could be used in urban landscape and bioengineering; it also has a high abiotic tolerance.
A yellow or green dye is obtained from the inner bark of the stem and roots.
From the fruit, dark green, purple and dark blue-violet dyes are obtained. A green dye is obtained from the leaves.

Preparation Method –
Oregon Grape is used both in food and medicine.
The roots are harvested in late fall or early spring and dried for later use.
Fruits are especially palatable when added to a porridge or muesli and can also be dried and stored for later use.
The root and root bark are used for internal use, in the preparation of decoctions or for external use in the form of a cream to treat various skin conditions.
The fruit is an excellent gentle and safe laxative.