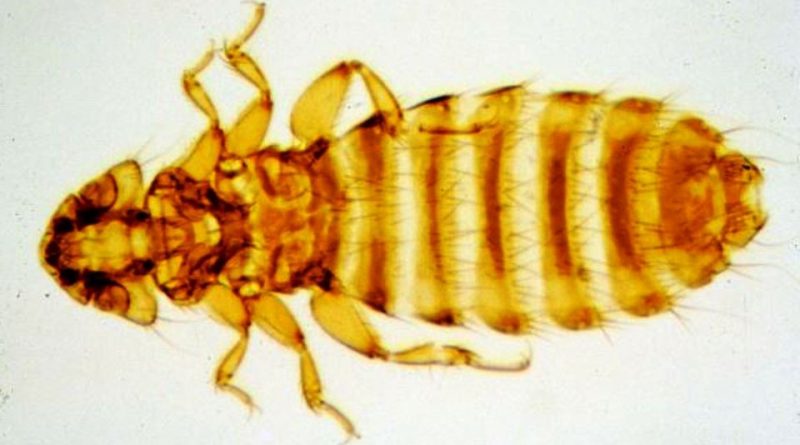 The pollen louse, or white louse (Menopon gallinae L.) is a small insect belonging to the Menoponidae family.

Geographic Distribution and Habitat –
The pollen louse together with the other lice of the genus are found on a vast range that includes Europe, North America, southwestern Asia.
This insect carries out its cycle and feeds on chickens, on blood, and therefore prefers to nest in the areas of the skin without feathers.
It is located in the hottest parts of the host where it is unable to peck. These parasites are not particularly dangerous but cause great itching with continuous movement. They can get on humans and cause itching and allergic reactions but are easily removed with a wash.

Morphology –
The Menopon gallinae is a small insect, of about 2 mm, of yellowish color with a trapezoidal-shaped head and an ovodial-shaped abdomen.
There are numerous bristles on the body.

Attitude and Life Cycle –
The pollen louse carries out its life cycle entirely on the host, with a period that lasts from three to five weeks.
The eggs are laid near the cloaca, near the tail, forming clusters; the nymphs that spring from it move hand by hand along the belly of the bird. From here they reach the neck and back, from which they will then move back to the cloaca to reproduce.

Ecological Role –
The Menopon gallinae can be found in very numerous colonies on chickens and other birds that annoyed by parasites, present themselves with ruffled and broken feathers.
The manifestation of its presence is also given by the birds that try to roll in the sand and in the earth to get rid of it.
While the best fed and older chickens may be strong enough to withstand a limited load of parasites, young or sick animals may succumb to the blood loss inflicted on them.
The fight against this parasite consists in the thorough cleaning of chicken coops and, in the case of infestations, natural products based on essential oils are useful among the many products. These are to be used above all as a prevention against attacks and therefore to be used when the chicken coop is stressed (eg during the moulting period or with the hens in brooding).
They can also be used to avoid the excessive proliferation of pests that may already be present in the chicken coop.