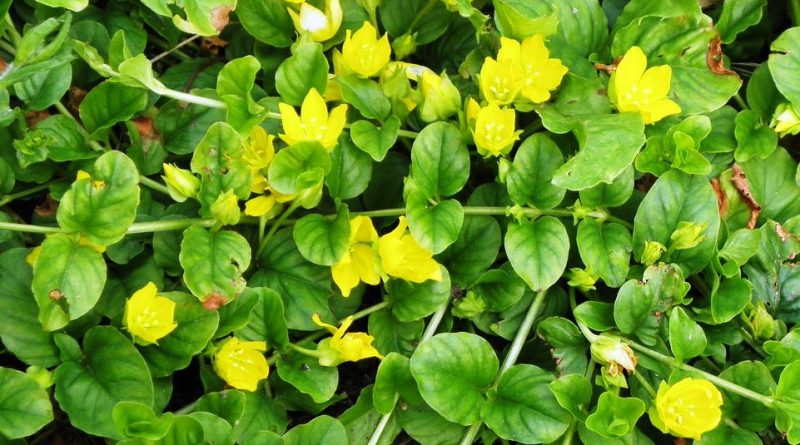 The moneywort or creeping jenny or herb twopence and also twopenny grass, (Lysimachia nummularia L.) is a herbaceous species belonging to the Myrsinaceae family.

Etymology –
The term Lysimachia comes from Λυσίμαχος Lysimachos Lisimaco (~ 361 BC-281 BC), Macedonian general dyadch of Alexander the Great, who followed in the enterprise of Asia (334-323) signaling himself for the value, then king of Thrace, Asia Minor and Macedonia: legend has it that Lysimachus fed his oxen with this plant to calm them. According to Linnaeus it could instead derive from Lysimachus, king of Sicily, of which Pliny also writes. Λυσίμαχος would derive from λύσις μάχη lýsis máche that dissolves the battle, the same meaning as loosestrife, a common English name of this genus
The specific nummularia epithet refers to the appearance of a coin nummulus (diminutive of númmus coin): due to the rounded shape of the leaves.

Geographic Distribution and Habitat –
Lysimachia nummularia is a perennial creeping herbaceous plant native to Europe but which has spread rapidly throughout the world.
In Europe it is present almost everywhere, including Great Britain, from the south of Sweden down to Spain, east to Greece and the Caucasus.
From its places of origin it has been introduced in various countries such as in North America, where in some areas it is considered an invasive species. It spreads aggressively in favorable conditions, such as in submerged, wet soils or near ponds.
Its habitat is that of humid places in pastures and along streams, where, however, it avoids acid soils; it grows especially in humid soils, often rich in clay in shady woods and hedges, particularly on the sides of streams, and on wet meadows and on the sides of paths. 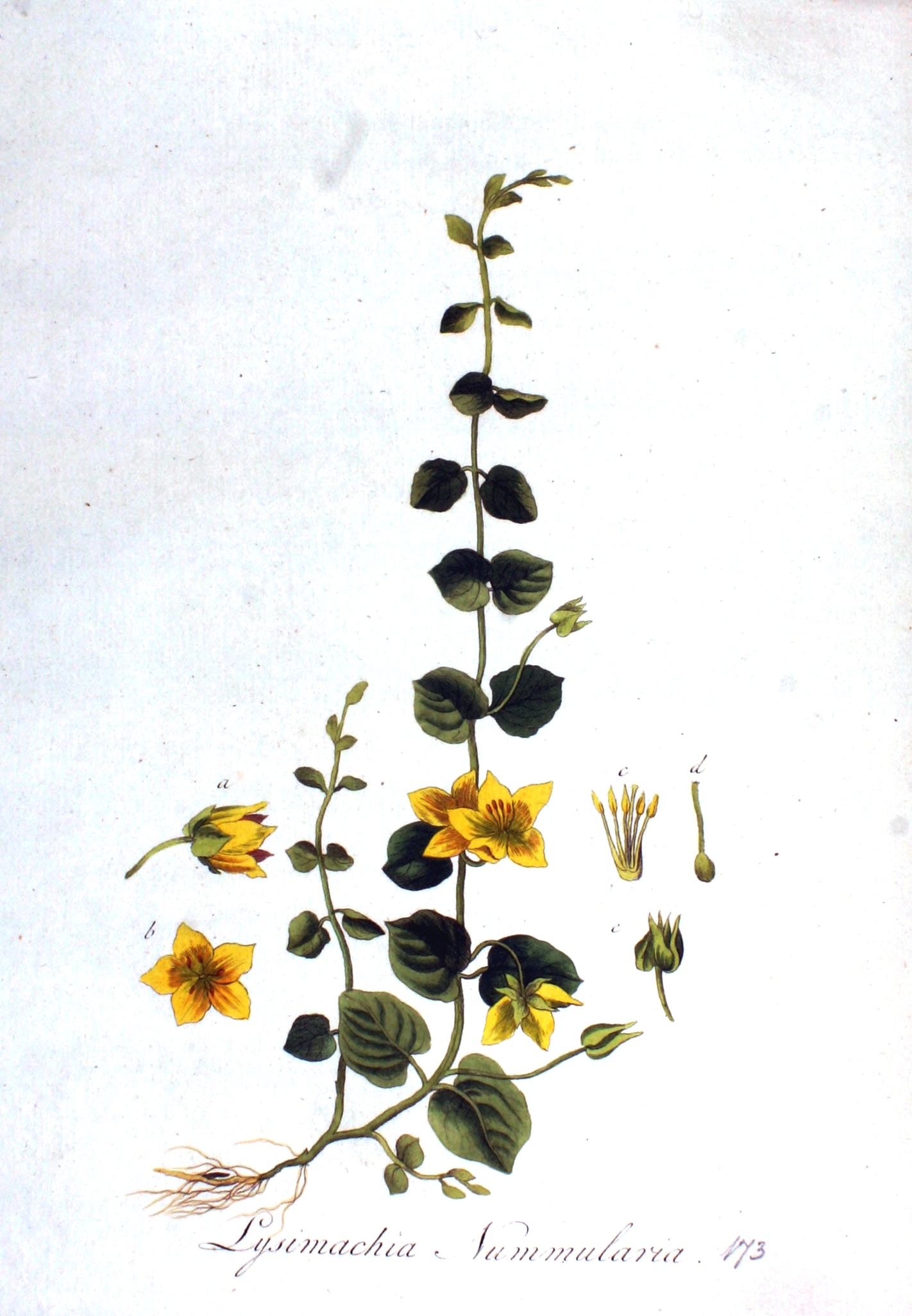 Description –
Lysimachia nummularia is a vigorous, prostrate, evergreen herbaceous perennial plant, which grows up to 5 cm in height and spreads rapidly and indefinitely by rooting the stem through superficial stolons that quickly cover large portions of land.
The leaves are rounded.
The flowers are cup-shaped yellow of 2 cm in diameter.
The flowering period is summer.
The fruit is a globose septic capsule, brown when ripe. Seeds numerous, laterally compressed, about 1-1,3 mm long, rounded or oblong, trine, with ventral navel and wrinkled head, dark brown in color.

Cultivation –
The moneywort is a plant that grows spontaneously especially in humid or even wet areas, although in cultivation it will tolerate drier conditions.
It is a cold-resistant plant and survives in temperatures as low as -15 ° C.
This plant is also cultivated in gardens as an ornamental plant, but its growth must be controlled to avoid that, growing dominates over other plants, suffocating them. The man has selected some varieties; among these we remember the aura which has leaves tending to yellow and is less intrusive than the original one. If acclimatized gradually it can adapt to live in the aquarium as well.
To be cultivated, the plant prefers a fertile and not arid, rather humid, soil; in these conditions it has an ideal development, but it turns out to be a plant resistant to conditions of different types: from cultivation in water to that in the ground, in the shade or in partial shade (if in water even in full sun), in drained or stagnant soil , sheltered or exposed to the cold.
The plant can be propagated by seed with sowing to be carried out in spring or autumn in an unheated greenhouse, even if in some areas it hardly produces seeds.
The transplant must then be carried out in mid-spring.
The multiplication can also take place by division of the tufts both in spring and in autumn. The larger tufts can be replanted directly in their permanent positions, although it is better to pot the smaller tufts and let them grow beforehand in a cold greenhouse until they root well. The transplant must then be carried out in the spring.

Customs and Traditions –
Lysimachia nummularia, known by various names such as: moneywort, creeping jenny, herb twopence and twopenny grass, is a plant that in various parts is harvested in its natural state for local use as food, medicine and source of materials.
The plant is used for edible use; tea is made from leaves and flowers.
It is also used in the medical field; the whole herb, used fresh or dried, is antiscorbutic, slightly astringent, diuretic and vulnerary.
This plant has proved useful in applying it to wounds where fresh shredded leaves are applied externally to the affected area.
Infusions are prepared to treat internal bleeding and diarrhea.
Among other uses, it is reported that Lysimachia nummularia is used as a ground cover plant in humid soils, but requires weeding at least for the first year or so. Plants should be spaced approximately 60cm apart and form a carpet, rooting as they spread.
From the ecological point of view this plant, given its diffusion, is classified as “Least Concern” in the IUCN Red List of threatened species, due to its great diffusion even if the humid areas in which it grows in the wild are decreasing.

Preparation Method –
Lysimachia nummularia is a plant that is used both as a food and medicinal plant.
The grass is harvested in the period of June and stored dried.
From the leaves and flowers a tea is prepared while for medicinal use infusions are prepared for various treatments.