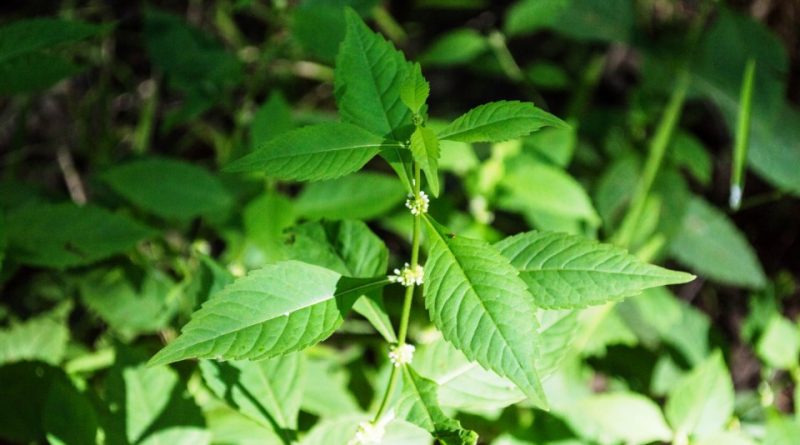 The Bugleweed or Egyptian’s herb or Horehound (Lycopus virginicus L.) is a herbaceous species belonging to the Lamiaceae family.

Etymology –
The term Lycopus comes from the Greek λύκος lýcos wolf and from πούς, ποδός pous, pódos foot: wolf’s foot.
The specific epithet virginicus comes from Virginia, Virginian, referring not so much to the current state but to the original region which was an area that covered the entire east coast of the West Indies under British rule, that is, from French Canada to Spanish Florida.

Geographic Distribution and Habitat –
Lycopus virginicus is a plant native to eastern North America: New York and Wisconsin as far south as Georgia and Texas and is widespread as far as eastern Canada.
Its habitat is that of rich soils, humid and shady places and can be found in riparian areas, in humid places of forests, woods and swamps. 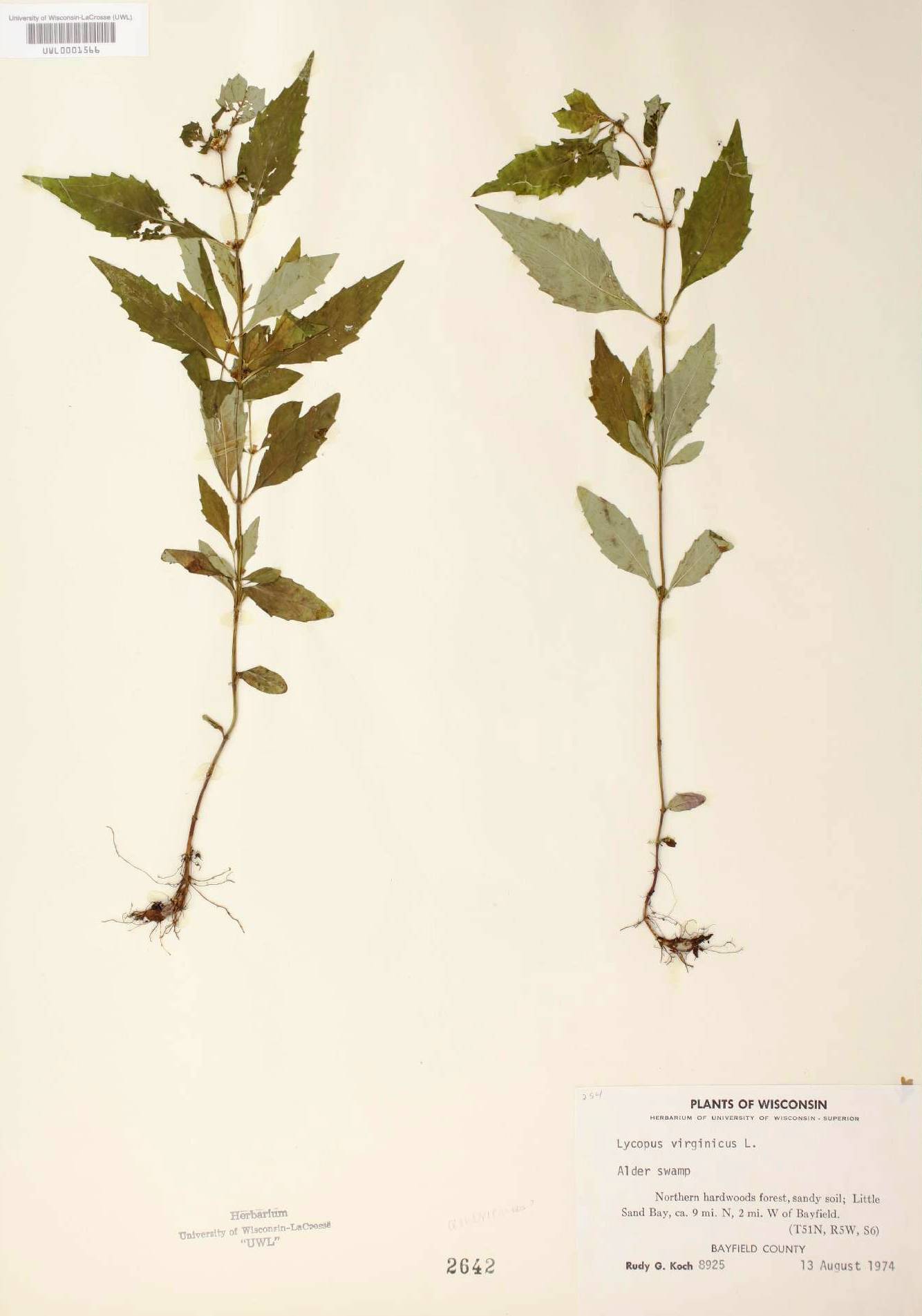 Description –
Lycopus virginicus is a perennial herbaceous plant with a square and hairy stem that can reach 0.60 – 1.00 meters in height.
The leaves are arranged opposite, with oval to lanceolate blades and toothed edges; they are dark green or purple.
The flowers are found at the axil of the leaves, in clusters; they are small and white or pink in color.
It blooms in the summer months.
The plant has a minty scent and a bitter taste.
The fruit is a schizocarp composed of 1 – 4 nucule (sometimes reduced to one due to abortion of the others) with ovoid-tetrahedral shapes and dorsally-ventrally flattened. Often there are teeth or tubercles on the apical ridge. The surface is brown and generally hairless with the upper (but also the lower) face densely glandular.
This species can easily be confused with Lycopus uniflorus. The two species can hybridize, producing Lycopus × sherardii.

Cultivation –
Lycopus virginicus is a perennial plant that is harvested in its natural state for local use as food and medicine.
It is a plant that tolerates most types of soil as long as it is moist and grows well in both full sun and partial shade, especially in damp lawns or in damp places near ponds or streams.
The plant can be reproduced by seed with sowing to be carried out in spring or autumn in an unheated greenhouse.
The transplant must be carried out when the seedlings become manageable in the permanent positions at the beginning of the summer.
Multiplication can also be done by division in spring or autumn. In this case the larger tufts can be replanted directly in their permanent positions, although it is better to pot the smaller tufts and grow them in an unheated greenhouse until they root well; the transplant must always be done in spring.

Customs and Traditions –
Lycopus virginicus is a plant that, especially in the past, was used in traditional herbal medicine. It was best known in the treatment of hyperthyroid conditions, including Graves’ disease and thyrotoxicosis. Indications included use in symptoms such as dyspnoea, tachycardia, tremor and exophthalmia. Medical research has not validated the use of the herb for these conditions.
It was also used for anxiety, insomnia and respiratory disorders such as pneumonia, bronchitis, hemoptysis and chronic cough.
In Native American tradition, the Iroquois considered the plant to be poisonous, but the Cherokees found it useful for treating snake bites in people and dogs. It was given to children to help them learn to speak and had ceremonial uses.
In the 19th century, the Eclectics held this plant in high regard for its effectiveness in cardiovascular disorders and compared its action to digitalis. It was believed to increase the contraction of the heart and arteries and was therefore a valuable remedy in heart conditions characterized by weakness, irregularity, palpitations, dyspnoea and anxiety and was highly valued in cardiac dilatation and hypertrophy. It was said to be antihemorrhagic and therefore useful in frequent small passive haemorrhages, such as epistaxis, hematemesis, hematuria, metrorrhagia, hemoptysis and intestinal bleeding.
Lycopus virginicus has also been used extensively for chronic debilitating lung conditions due to its antitussive and expectorant abilities.
Herbalists once considered the plant a mild narcotic and hypoglycemic.
The main active constituents are: phenolic acid derivatives (caffeic, rosmarinic, chlorogenic and ellagic acids); methyl ester of pimaric acid, lithopermic acid and other organic acids; there are also flavonic glycosides, volatile oil, tannins and luteolin.
In summary, the curative activities charged to Lycopus virginicus are:
– peripheral vasoconstrictor;
– active cardio-tonic and cardio-diuretic, increases the force of contraction of the myocardium and reduces heart rate;
– thyroid, thyroid stimulating hormone (TSH) and thyroxine antagonist;
– antitussive;
– sedative;
– astringent.
Numerous recent studies have tried to explain the antithyrotropic activity of Lycopus spp .; these studies suggest that lithopermic acid and other organic acids such as rosmarinic acid, chlorogenic acid, ellagic acid and luteolin-7 beta-glucosidase are the active inhibitory components responsible for this anti-thyroid activity.
However, a review of the current literature reveals a lack of highly reliable clinical studies investigating the safety and efficacy of Lycopus; however, secondary sources have reported, for example, that the other species, L. europaeus, inhibited iodine metabolism and thyroid T4 production in human volunteers and was useful in the treatment of hyperthyroidism in uncontrolled studies conducted. in the 40s and 50s.
Among the contraindications and precautions, Lycopus virginicus is contraindicated in conditions of thyroid hypofunction such as hypothyroidism and myxedema, and in thyroid enlargement, such as goiter without functional disorders. It is contraindicated in pregnancy due to its potential antigonadotropic activity and during breastfeeding as it potentially reduces milk production.
Furthermore, Lycopus virginicus should not be administered concomitantly with thyroid hormone-containing preparations such as thyroxine sodium and may interfere with the administration of thyroid diagnostic procedures using radioactive isotopes.
Among the side effects it was seen that the therapy of high (unspecified) doses of preparations based on Lycopus virginicus has been implicated in a rare case of thyroid enlargement. Other side effects reported in the literature from the clinical use of preparations of this plant include an increase in the size of the thyroid gland (goiter not related to thyroid malfunction) and occasionally an increase in hyperthyroid symptoms such as nervousness, tachycardia and weight loss.
In addition, an increase in symptoms of thyroid hyperactivity has been reported following the sudden discontinuation of preparations based on this plant.
The plant also has edible uses and the root is used after cooking.

Preparation Method –
Lycopus virginicus blooms in the summer months and, to best perform its functions, it must be harvested just before the buds open.
The plant can be used fresh or dried, as an infusion or as a tincture.
The roots were chewed and a part swallowed and the rest applied externally in the treatment of snake bites.