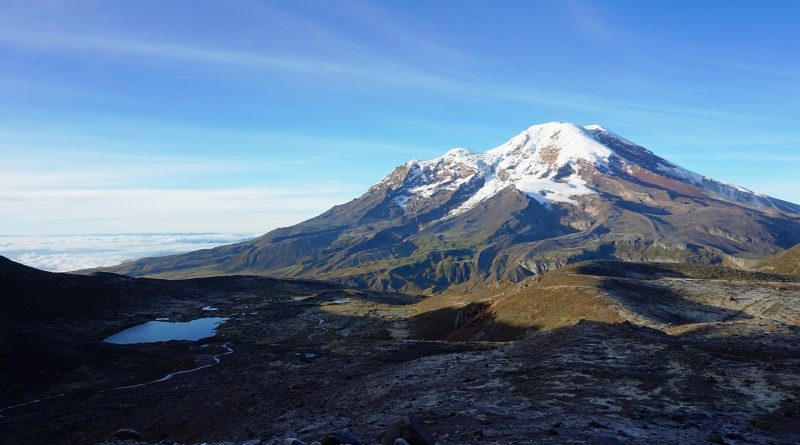 The Chimborazo, with its 6310 m s.l.m. it is the highest mountain in the Ecuadorian Andes. It is also the highest peak near the equator and due to the equatorial bulge, its peak is the furthest point from the center of the Earth.
In fact, although it is 2,547 meters lower than Everest, its summit is 2.5 km more from the center of the Earth than the top of the Himalayan mountain. Therefore, if the “highest mountain” is to be understood as the one that extends most into space, the Ecuadorian volcano is by far the highest earthly peak.
The Chimborazo is located in the Ecuadorian hinterland near Riobamba 180 km south of Quito.
This peak also has a diameter of 20 km and manages to dominate a region of 50,000 km². He is nicknamed by the inhabitants Taita Chimborazo, that is dad Chimborazo, while his mother is the Tungurahua.
From this mountain arise the numerous tributaries of the Guayas River, as well as those of the Amazon River, and is considered the first source of water supply for the provinces of Bolivar and Chimborazo: Guaranda is supplied by the “vertientes”, in the upper “páramo” (an arid plateau of about 4 000 m) [altitude, width, length?] located 25 km from the city.

Geography –
The Chimborazo, from a geological point of view, is a Quaternary volcano, with a dome without a crater. Through particular investigations some eruptions have been identified during the various eras which in the last 10,000 years can be summarized as follows:
– 550 AD ± 150 years;
– 270 AD ± 150 years;
– 2500 BC ± 1500 years
– 4130 BC ± 150 years;
– 5410 BC ± 75 years;
– 7500 BC ± 2500 years.
Unfortunately, according to French researchers, most likely due to global warming, the glaciers of the Andes, and therefore also of the Chimborazo, are undergoing a fairly fast melting phenomenon and are therefore destined to disappear within a few decades.
For this reason it is assumed that cities such as Quito, Lima and La Paz, which rely on such water supply, will have serious problems in the future.
To the west of the volcano lies a wide desert expanse of volcanic sands formed by the accumulation of the finest ejection materials. The Chimborazo lava flows merge with those of the nearby Caruhuairazo.

Flora –
The particular ecosystem that surrounds the immense structure of the Chimborazo is due to its relative aridity. The province of Chimborazo although with a dry climate, has some flooded areas where typical plants grow such as the straw páramo, ñáchag with small yellow flowers, chuquiragua or Andean flower, rabbit ears, romerillo, sunfo and ashpachocho.
There are also trees such as kishwuar and those known from paper that form small forests.
Around this peak the Chimborazo Wildlife Protection Reserve was established which is made up of herbaceous species, with sporadic presence and remains of shrubs and small trees, has eight ecosystems; it hosts more than 1,500 plant species, with 60% endenism such as: Polylepis, Ginoxis, Pumamaqui, Quishuar, Chuquirahua, Romerillo, Gentanella, etc.
The dry moors such as the Chimborazo sandbar can be considered as “Puna” páramo which varies between semi-desert and desert, it is the only one comparable to the highlands of Peru, Bolivia and northern Argentina.
According to the Plant Classification System proposed by Sierra (1999), the Reserve has four plant formations located in the Central Subregion, Central Sector of the Western Cordillera.
– The Evergreen High Mountain Forest: (3.000-3.400): includes the vegetation known as Ceja Andina or transitional flora between the high mountain forests and the páramo. This formation is similar to the rainforest in its physiognomy, as well as in the amount of mosses and epiphytic plants. However, they differ in the ground which tends to be covered with a thick layer of moss. The trees grow irregularly, with branched trunks and in some cases very inclined or almost horizontal (Sierra 1999).
– Herbaceous desolate area: (3,400-4,000): at its lower limit is the Andean eyebrow shrub or cultivated fields, where the Andean forest has been cleared. The tufted grasses of the genera Calamagrostis and Festuca, mixed with small shrubs dominate (Sierra 1999).
– Desolate land: (Over 4,200 meters above sea level up to the snowfall limit); in this formation the vegetation alternates with patches of bare sand. It is characterized by being xerophytic, with few herbs, small shrubs, mosses and lichens. In some mountains, desert moors begin at a considerably lower level. For example, the western slopes of Chimborazo are arid and sandy from 3,800 meters above sea level. There is also a large sandy area on the southwestern wall of the volcano, similar to the Punas of Bolivia, where vegetation is sparse and some species of Stipa, Calamagrostis, shrubs and grasses dominate. In Chimborazo páramos the gradient between humid, semi-dry and dry is very evident (Sierra 1999). Among the characteristic flora stand out: Azorella pedunculata (Apiaceae), Chuquiraga jussieui, Hypochaeris sonchoides, Senecio microdon and S. comosus, Culcitium nivale, Werneria rigida (Asteraceae) and other plants.
– Gelidofitia: (Above 4,700 meters above sea level); the vegetation is dominated by lichens and mosses. The higher plants (phanerogams) practically disappear and the existing ones grow underground. The rhizomes and roots are very developed and the leaves are very small. This type of formation is found in all the peaks of the Western Cordillera, as in the case of Chimborazo (Sierra 1999). The characteristic plants are: Aciachne flagellifera (Poaceae), Loricaria ferruginea (Asteraceae), Draba aretioides (Brassicaceae), Valeriana pilosa (Valerianaceae). Musks: Andreana sp. and Grimmia sp. Lichens: Lecanora sp. and Gyrophora sp ..

Fauna –
The Chimborazo natural area is distinguished by its avifauna, with various species of hummingbirds such as the endemic hummingbird “Estrella del Chimborazo”, which nests at more than 5,000 meters above sea level, as well as hawks and curquiloni; there are also species of mammals and wild animals such as: rabbits, wolves, deer and camelids.
The Chimborazo Wildlife Protection Reserve was created for the reintroduction of vicuñas and the conservation of the moors of this area, whose ecological conditions similar to the southern Puna of the Andes were ideal for the adaptation of this camelid; The last population census carried out in 2018 recorded 6,800 vicuñas in Ecuador.
As for mammals, the Camelid family is the main one living in the area. For example, vicuñas (Vicugna vicugna) have a low demand for water and can live in semi-desert areas. A peculiarity of this animal is that its incisor teeth grow for almost its entire life, allowing it to feed on hard leaves, with a high content of silicic acid, which is found for example in fescue, Calamagrostis, as well as low and creeping grasses. The alpaca (Lama pacos) is another of the camelids domesticated by the Andean natives, highly appreciated for the quality of its wool. The lama (Lama glama) lives in the Reserve and also in other moorlands of the Ecuadorian highlands. These animals withstand winds that can reach 180 km / h (Gallo et al. 1992). It is also possible to observe páramo wolves (Lycalopex culpaeus), páramo deer (Odocoileus virginianus), chucuris (Mustela frenata), polecats (Conepatus semistriatus). Commonly one can observe rabbits (Sylvilagus brasiliensis) among the prairies; (Paredes 2005; Gallo et al. 1992). Gynoxys forests are the perfect habitat for rodent species: Akodon mollis, Phyllotis andinum, Thomasomys paramorum (Cricetidae).
In addition, 31 species of birds, typical of the Andean environments, have been identified in the Reserve. It is normal to observe: curquiloni (Phalcoboenus carunculatus), pigs (Geranoaetus melanoleucus) and in the sandy areas it is possible to observe swifts (Aeronautes montivagus) flying very fast; (Paredes 2005a). Other very representative birds of this part of the Andes are: the Ecuadorian star hummingbird (Oreotrochilus chimborazo), the condor (Vultur gryphus). In the Cocha Negra lagoons and in the winter lagoons of the heaths of Urbina in Abraspungo it is possible to find: marsh ducks (Anas andium), buzzards (Gallinago stricklandii), marsh gulls (Larus serranus), lilies (Vanellus resplendens).
Among the amphibians and reptiles, the Management Plan (1992) reports the jambatos toad (Atelopus ignescens), Eleutherodactylus curtipes (Brachycephalidae) and Gastrotheca riobambae (Amphignathodontidae), currently at risk of extinction. However, other amphibians that populate this protected area can be mentioned, such as: Eleutherodactylus w-nigrum, E. chalceus, E. unistrigatus (AmphibiaWeb 2006). Furthermore, the Reserve is a natural refuge for highly threatened species, such as: Colostethus jacobuspetersi (Dendrobatidae, CR) and Gastrotheca pseustes (Amphignathodontidae, EN); (Amphibia Web 2006).