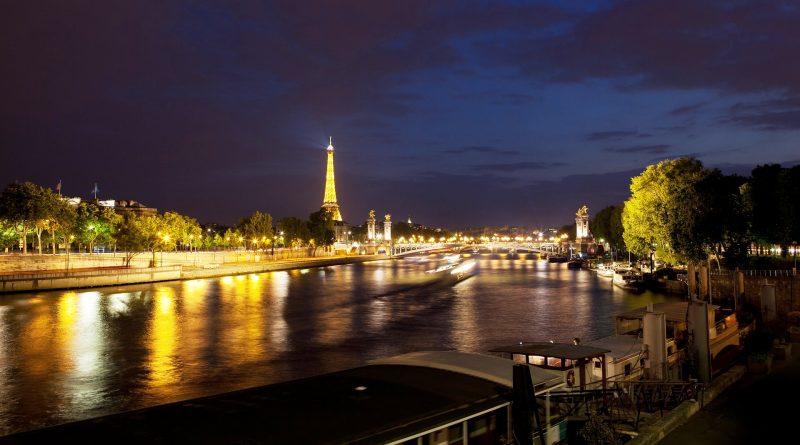 France is a state mainly located in Western Europe, but which has territories scattered over multiple oceans and other continents.
The surface of France in European territory is 543,965 km² while the total area, including the various territories, is 675,417 km².
The total population of France is 68,303,234 inhabitants as of 2019.
The capital is Paris with 2,229,095 inhabitants as of 2018.
France is a unitary constitutional republic with a semi-presidential regime. Paris is the capital, the official language is French, the official currencies are the euro and the Pacific franc in the Pacific Ocean territories.
France is part of the European Union and is the third largest nuclear power in the world, one of the permanent members of the United Nations Security Council and a member state of NATO. It is also a member of the G7, the G20, the euro zone, the Schengen area and hosts the headquarters of the Council of Europe, the European Parliament and UNESCO.
France exercises its sovereignty over territories present on three oceans and four continents.

Geography –
Metropolitan France, that is the European one, is located at one of the western extremities of Europe. It is bathed by the North Sea to the north, the English Channel to the northwest, the Atlantic Ocean to the west and the Mediterranean Sea to the southeast. It borders Belgium and Luxembourg to the northeast, Germany and Switzerland to the east, Italy and Monaco to the southeast, Spain and Andorra to the southwest.
The borders to the south and east of the country correspond to mountain massifs, the Pyrenees, the Alps, the Jura massif, the eastern border corresponds to the Rhine river, while the north and north-east border is not based on any natural element . Metropolitan France includes many islands, especially Corsica and the coastal islands. It is located between latitudes 42 ° 19’46 “N and 51 ° 5’47” N, and longitudes 4 ° 46 ‘W and 8 ° 14’42 “E.
France is also composed of numerous territories located outside the European continent, currently called overseas France, which allows it to be present in all the oceans of the world, except the Arctic ocean. These territories have special statutes in the territorial administration of France and are located:
– on the South American continent: French Guiana;
– in the Atlantic Ocean: Saint-Pierre and Miquelon and, in the Antilles, Guadeloupe, Martinique, Saint-Martin and Saint-Barthélemy;
– in the Pacific Ocean: French Polynesia, New Caledonia, Wallis-et-Futuna and Clipperton;
– in the Indian Ocean: Réunion, Mayotte, the Scattered Islands, the Crozet and Saint-Paul Islands and New Amsterdam;
– on the Kerguelen plateau: the Kerguelen Islands;
– in Antarctica: the Earth Adelia.
France also has land borders with Brazil and Suriname in French Guiana, as well as with the Netherlands for the French part of Saint-Martin.
From the morphological point of view it is a country characterized by the great coastal plains of the north and west, by the mountain ranges that characterize the south-east (Alps) and the south-west (Pyrenees). The French Alps rise up to touch the highest point in Western Europe in common with Italy, Mont Blanc, which culminates at 4810 m above sea level. There are also other mountainous regions of more ancient formation, such as the Corsican mountains, the Central Massif, the Jura, the Vosges, the Armorican Massif and the Ardennes which are a very rocky and wooded region.
France also has a large river system which is mainly composed of rivers such as the Loire, the Rhone (whose sources are in Switzerland), the Garonne (whose sources are in Spain), the Seine, part of the Rhine, the Meuse, of the Moselle, the Somme, the Vilaine, which constitute their own river basins. The Gironde estuary is the common estuary of the Garonne and Dordogne rivers, the largest estuary in Western Europe. 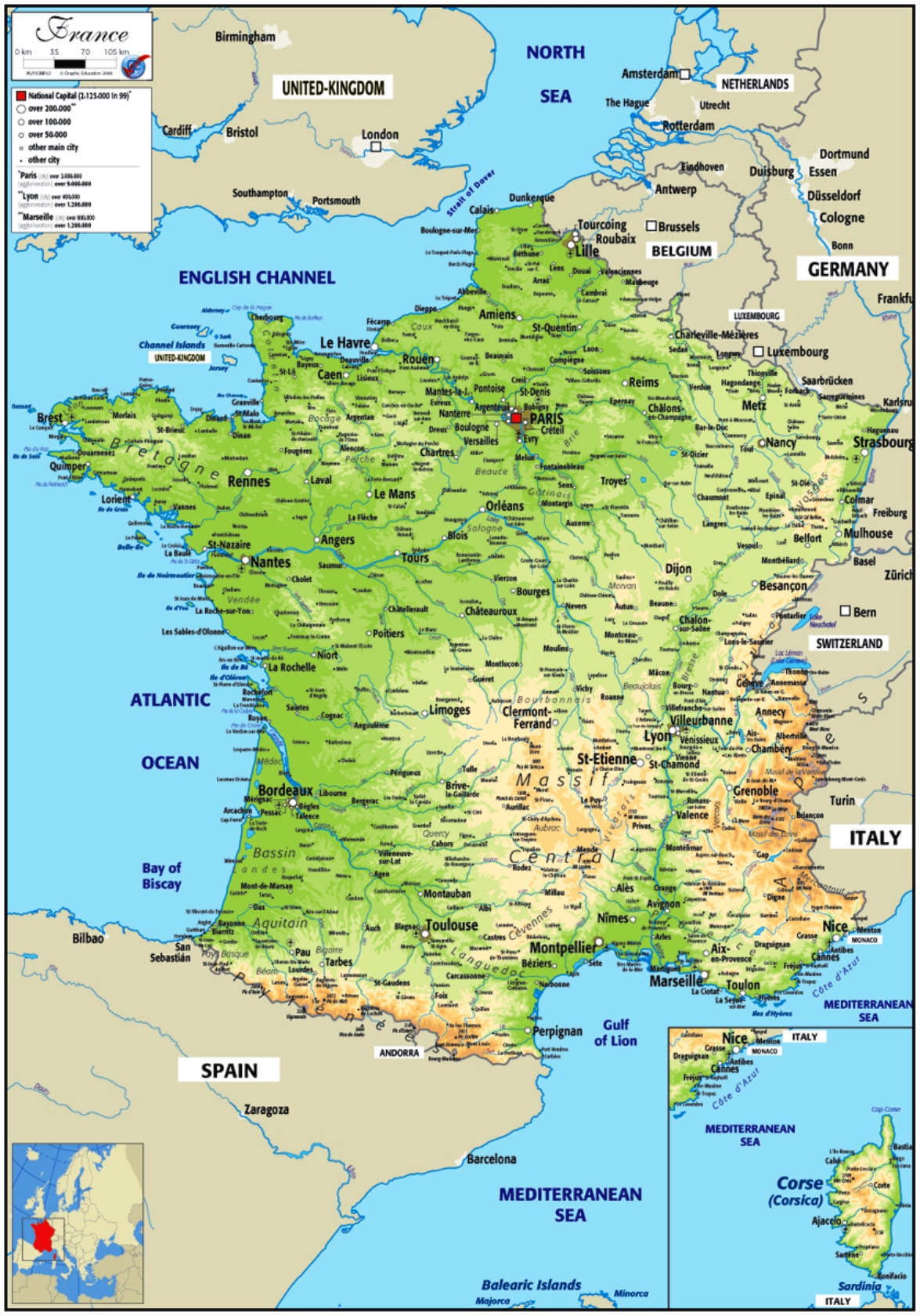 Climate –
Metropolitan France is characterized by four major climatic zones:
– An oceanic climate in the west and north-west: summers not too hot and winters not too cold;
– A semi-continental climate in the north-east: hot summers and cold winters;
– A Mediterranean climate in the south and south-east: hot summers and mild winters;
– An alpine climate in the Alps, the Pyrenees, the Massif Central, the Jura and Vosges: mild summers and cold winters.
Except for the south, which generally sees dry summers, the rain is evenly distributed throughout the year.
With reference to the overseas territories, there are three main types of climate:
– A tropical climate in most overseas regions: constant high temperature throughout the year with a dry season and a rainy season;
– An equatorial climate in French Guiana: constant high temperature all year round, with precipitation;
– A subpolar climate in Saint-Pierre and Miquelon and in most of the southern islands: short mild summers and long, very cold winters.

Flora-
In France, the maquis (maquis, in French) is one of the most important ecosystems in the Mediterranean basin.
The Provence region is known for its flowers and perfumes. Grass is a medieval town on the French Riviera and the perfume capital of the world
In Haute Provence, the lavender culture is neither the result of chance nor of agronomic evidence. Simply, in the twentieth century, it turned out to be a financial resource capable of coping with the agricultural and demographic crisis: it is therefore an economic opportunity recognized by the inhabitants of a region. In 1991 a “Lavender Museum” was created and in 1996 a “Route de la lavanda” (lavender road) to enhance this regional specificity.
Brassica alba (or white mustard) and Brassica juncea (or dark mustard) are flowers from whose seeds the renowned mustard or mustard is obtained (famous are those of Dijon, Bordeaux, Orleans and Meaux).
The flora includes the classic European species: from the alpine ones to the Mediterranean ones: the forests cover most of the French territory and consist of about 45% of oaks, 40% of Scots pines, 10% of beech trees and 70 other species. In the autumn undergrowth we can find above all mushrooms such as chanterelles, porcini or cantarelli. There are many plant species protected at a regional or international level: among these stand out the lanceolate asplenium (a species of fern), otriocolaria citrina (a carnivorous marsh plant) and the common moss (the largest type of moss in Europe ).

Fauna –
In France, the fauna consists of a few types of large mammals such as deer, fox, wild boar in wooded areas and wolves and chamois in the more mountainous areas. In the area of ​​the Camargue it is possible to observe the species of horses called “Camargue”, originally from those areas, but now present throughout the globe. Among the small animals we can note the porcupine and animals of the weasel family; among the reptiles there are the viper, the lizard and the turtle. Even the avifauna is not lacking: we have the Eurasian sparrow hawk, the pesciaiolo, the common buzzard, the goshawk (which is a diurnal bird of prey, the only living species in Europe), the prawn, the owl, the tawny owl, the gray woodpecker, the nightingale and in the Camargue region also of flamingos. As for the fish species, the following are mentioned: cod, herring, mackerel, sardine and tuna.
We also remember the French Friesian which is a dairy cattle breed originating in France. It is an excellent producer of milk from which various types of cheese are obtained, one of the most typical foods of French gastronomy, with a significant impact on the agricultural economy of the country.