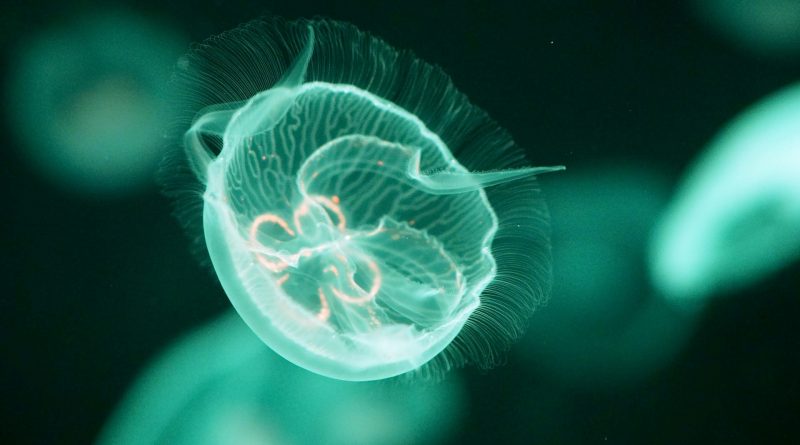 The mysteries of the jellyfish

The jellyfish is a planktonic animal that belongs to the large group of cnidarians (Phylum Cnidaria), together with sea anemones and corals.
They have a body characterized by a radial symmetry that develops concentrically around a central axis.
The jellyfish have an unmistakable shape: their body (called umbrella) resembles a bell, from whose lower edge dozens of tentacles branch downwards.
On the concave side of the body, in a central position, there is a cylindrical structure called the handlebar, at the end of which is the mouth.
This is the only opening present in the animal and opens into a blind cavity called the gastrovascular cavity.
Jellyfish are very simple organisms and their body consists of only three layers:
the epidermis, the outermost layer, which acts as a barrier to the surrounding environment;
the gastrodermis, the innermost layer, which lines the gastrovascular cavity;
and finally the mesoglea, a gelatinous mass that stands between the other two layers and which favors the floatation of the animal.
These animals have a life cycle that varies from species to species and can be more or less complex.
However, this cycle can be divided into two phases:
– polyp phase;
– jellyfish phase.

The polyp phase is a benthic form, adhering to the substrate, with a tubular body, with mouth and tentacles facing upwards, with reproduction by budding or splitting.
The jellyfish phase is the floating phase, with the body shaped like a bell with a mouth and tentacles pointing downwards.
The jellyfish we see in the sea are the “adult” forms that reproduce sexually by producing eggs and spermatozoa, from which the polyps originate.
What makes jellyfish so unsympathetic to swimmers around the world are their stinging tentacles.
These in fact, unlike the umbrella, are able to cause annoying wounds thanks to the presence of hundreds of specialized cells to capture prey (cnidocytes).
Each cnidocyte contains inside a microscopic capsule (nematocyst) that encloses a spiral filament capable of injecting venom into the prey or enveloping it.
Thanks to this sophisticated system, jellyfish are able to prey on organisms that are much more complex and faster than them.
But the most extraordinary thing is that there is a jellyfish, the Turritopsis nutricula, which is potentially immortal because, over time, it is able to rejuvenate more and more until it begins a new cycle of life.
This rejuvenation process, called transdifferentiation, seems to be caused by strong environmental factors that participate in the cellular changes of the organism.