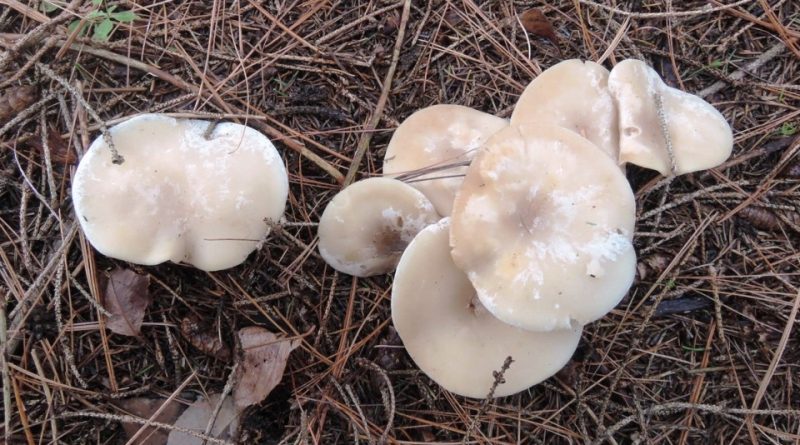 Etymology –
The term Clitocybe comes from the Greek κλῑτύς clitús declivio, slope and κύβη cýbe head: with a tilted head, due to the generally funnel-shaped hat shape, due to the decurrent gills.
The specific epithet phyllophila comes from the Greek φύλλον phýllon leaf and from φίλος phílos friend, lover: which grows preferably on a substrate of leaves.

Geographic Distribution and Habitat –
Clitocybe phyllophila is a ubiquitous, common and widespread species that grows in large groups in the period between summer and autumn.
Its habitat is that of woods, meadows and gardens, above the deciduous and coniferous litter. 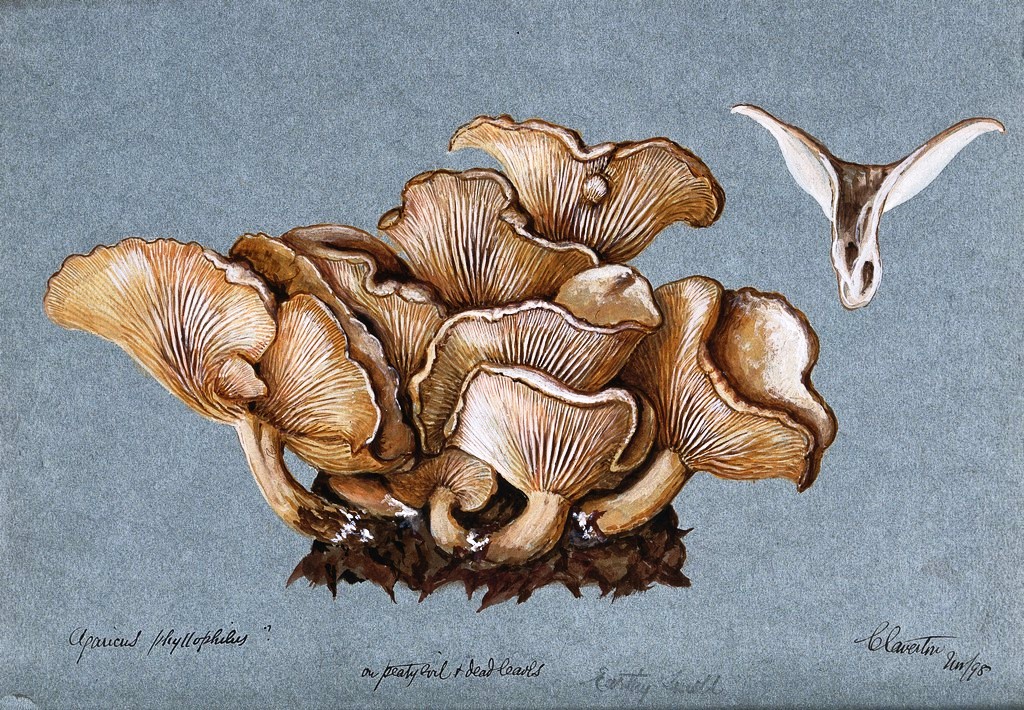 Recognition –
Clitocybe phyllophila is a mushroom that is recognized by the convex-umbonate hat in its youth and then flattened and irregularly funnel-shaped, of 4 – 8 (10) cm. The cuticle is off-white-white, tending to crack with age. Wavy margin, not very fleshy.
The gills are adnate, thick and thin, slightly decurrent on the whitish stem, slightly pink with age.
The stem is 4-7 x 0.5-1.5 cm, cylindrical, often curved, fibrous, whitish then pink, longitudinally striated. Neither the ring nor the volva is present and it is difficult to detach from the hat.
The meat is light in color, unchanging, with a sub-zero odor and a sour taste.
The microscope shows cream-colored spores in mass, from subglobose to ellipsoidal, smooth, guttulate, apiculate, 4-4.5 x 3.5-4 µm.
The basidia are tetrasporic, clavate, 25-30 x 6-7 µm.

Cultivation –
Clitocybe phyllophila is not a cultivated mushroom due to its poisonousness.

Customs and Traditions –
This mushroom is poisonous, like most of the small white Clitocybe, as it contains a non-negligible amount of muscarine, an alkaloid and therefore can cause the homonymous syndrome.
Among other things, its danger is high as it can be easily confused with some species including:
– Clitopilus prunulus which is an excellent edible, resembles this species, but is recognizable by the fragility of the flesh which in the clitocybe is quite elastic and fibrous, and, to an expert eye, by the different brightness of the cuticle: shiny and silky in this species, opaque and in any case satin in Clitopilus;
– Lyophyllum connatum, also edible, is distinguished mainly by the growth in compact tufts with straight, not curved stems.
Furthermore, the reliable determination of these species is often rather difficult and among experts there is not always unanimity on their classification.

Preparation Method –
Clitocybe phyllophila is an inedible and poisonous mushroom that causes intoxications that occur from a few minutes up to two hours after a meal, sometimes even during. Symptoms consist of heavy sweating with nasal secretions and tearing followed by abdominal pain, nausea, vomiting, diarrhea and also anxiety, tremors and dizziness. Therapy requires hospitalization where the patient undergoes specific treatment with atropine. In fact, this represents the only type of mushroom poisoning for which there is an antidote.