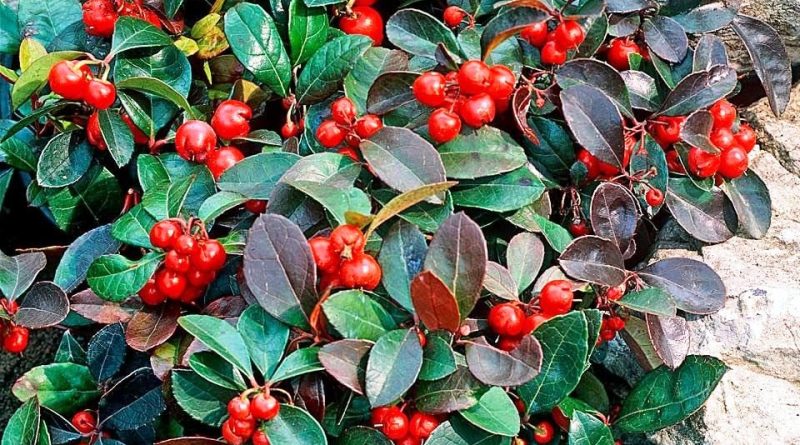 Etymology –
The term Gaultheria of the genus was dedicated to the French naturalist Jean François Gaulthier (Gaultier, Gautier, Gauthier – 1708-1756), who settled in Canada in 1742.
The specific epithet procumbens comes from procumbo lying down, falling to the ground: crawling on the ground.

Geographic Distribution and Habitat –
Eastern teaberry is a plant native to North America where it is widespread in north-eastern North America, from the island of Newfoundland to south-eastern Manitoba, up to Alabama.
Its habitat is that of mixed forests, mesic forests, dry and acidic forests, electrical lines, road embankments, old pastures, coniferous forests, maritime heaths, mountain heaths, bogs and swamps, usually in acidic and / or sandy soils, at altitudes up to 1,500 m. Generally it produces fruit only in sunny areas. 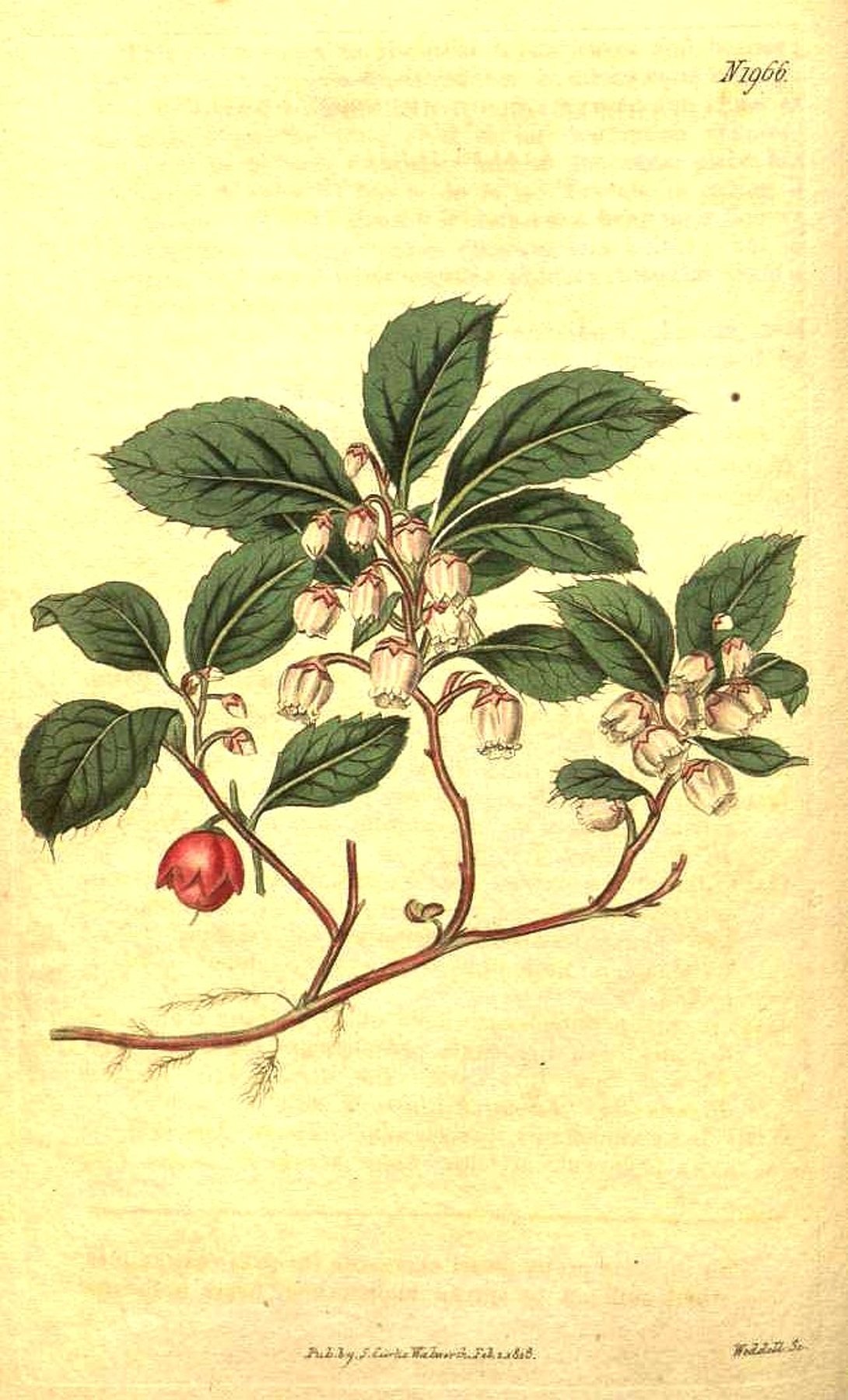 Description –
Gaultheria procumbens is a small shrub, 10 to 15 cm tall.
The foliage is densely branched made up of small leathery leaves, dark green in color, which from September onwards turn towards reddish.
The leaves are evergreen, elliptical-oval in shape, 2-5 cm long and 1 – 2 cm wide, which smell due to the essential oil contained; they have slightly toothed edges and pale green lower laminae.
The flowers are bell-shaped, 5 mm, white, pink or lilac depending on the variety, they are single or in short racemes.
It blooms in the spring – summer period, from May to June.
The fruit, similar to a berry, is a dry capsule surrounded by a fleshy calyx, 6-15 mm in diameter, red when ripe.

Cultivation –
The eastern teaberry is a beautiful ornamental plant that can be grown in the garden to create borders and flower beds because of its leaves and the splendid bright red berries that persist on the twigs throughout the Christmas period.
This plant prefers shady and well-ventilated places. It does not fear the cold and can be grown in the garden at any time of the year in the shade of maples and rhododendrons. It also develops well in pots.
From the pedological point of view, it prefers a specific substrate for acidophilic plants composed of peat, sand and soil.
It is a plant that needs regular watering in the warm months and only when the soil is completely dry. For plants grown in pots, avoid water stagnation in the saucer. During the dormant period, it is not necessary to water plants grown in the open ground.
As for the propagation it is preferable to multiply it through cuttings. The cuttings should be taken in summer, preferably between July – August, and buried in a mixture of sand and peat until the new shoots appear. The cuttings are kept in a container for the whole winter and when the shoots appear in spring they are planted or they can be transferred to pots and in the following autumn they are ready to be planted in the ground.
If you proceed by seed, sowing must be carried out in October using a peaty substrate mixed with a little lime and common soil. After sowing, the pot or seedbed should be placed in a fresh greenhouse until the young shoots appear, which generally appear after 4 weeks. Subsequently, the seedlings are placed in individual containers and reared in them until April or May of the following spring.

Customs and Traditions –
The Gaultheria procumbens, as well as for ornamental uses is also used for food and medicinal purposes.
The fruits can be eaten both cooked and raw.
The fruit is by no means bland, it has a very strong spicy taste of germolene, a smell similar to that perceived in a hospital waiting room.
The fruit, if not eaten by birds, must be collected and can be used in cakes or made into jams, etc.
A very pleasant tea is made from the fresh leaves and a stronger tea can be made by first fermenting the leaves when they have reached the bright red color.
An essential oil can be distilled from this plant which is used to flavor beer, sweets, chewing gum, etc.
The leaves of this plant were used extensively by the North American natives in the treatment of various pains and to aid breathing when hunting or carrying heavy loads.
The essential oil (known as “wintergreen oil”) obtained from the leaves contains methyl salicylate, which is closely related to aspirin and is an effective anti-inflammatory.
This species was once a major source of methyl salicylate, although this is now only obtained synthetically.
The leaves and the oil are analgesic, anti-inflammatory, aromatic, astringent, carminative, diuretics, emmenagogues, stimulants and tonics.
The plant, especially in the form of essential oil, is more useful if applied externally in the treatment of acute cases of rheumatism, sciatica, myalgia, sprains, neuralgia and phlegm.
The oil is sometimes used in the treatment of cellulite.
Some caution is advised, especially if the oil is used internally, as excess essential oil is toxic, causing liver and kidney damage. It should not be prescribed to patients who are hypersensitive to salicylates (aspirin).
The plant is used in homeopathy to treat conditions such as inflammatory rheumatism; pleurodynia; sciatica and other neuralgia; cystic and prostatic irritation; undue sexual arousal; and kidney inflammation.
Other uses include agroforestry ones; it is in fact a good ground cover plant for shady locations even if it requires weeding for the first year or so. It forms a dense tuft-like carpet, bristles as it spreads and should be spaced approximately 45cm apart.
Furthermore, from an ecological point of view, the Virginia deer feeds on the plant; other animals that eat Gaultheria are the wild turkey, the pheasant, the baribal, and the red fox; is a favorite food of chipmunks and leaves, in Virginia, are a minor winter food of the gray squirrel.

Preparation Method –
The leaves of Gaultheria procumbens can be harvested at any time, from spring to early autumn, they are dried for use in infusions or distilled to make oil.
An essential oil is obtained from the leaves by steam distillation.
To obtain the oil, the leaves must be soaked for 12 – 24 hours in water.
Essential oil is used as a food flavoring, in medicine and in perfumery and toothpastes. However, remember that in high doses it can be toxic.
The fruits are edible, and the leaves and twigs give a good infusion after drying.
In addition, an infusion of leaves is used to relieve flatulence and colic.