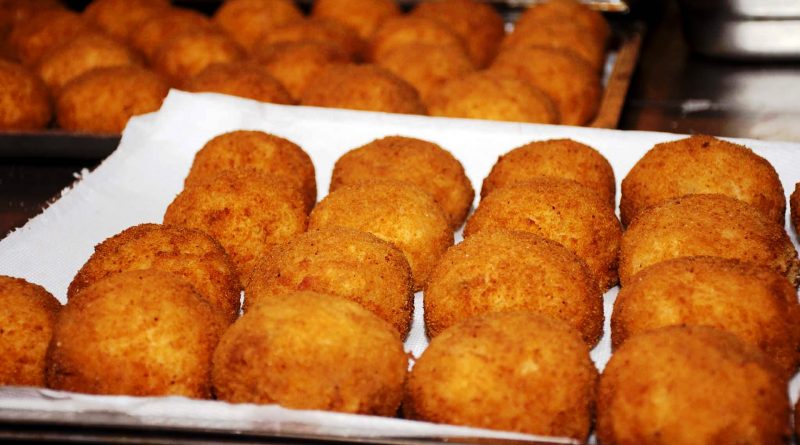 The arancino or arancina is a specialty of Sicilian cuisine officially recognized and included in the list of traditional Italian food products (PAT) of the Ministry of Agricultural, Food and Forestry Policies with the name of “rice arancini”.

Geographic area –
Arancino or arancina is a product whose authorship is complex is difficult but which certainly finds its place, origin and different traditions within the entire Sicilian territory.
However, the different evolution of this product means that in the various provinces, and within them, in some municipalities both the name and the methods of preparation have differentiated over time.

Raw material –
Given the differentiation in ingredients, as well as in forms, there are no standard raw materials but the constant presence of external breading.
However, among the most present raw materials we find rice, saffron, meat sauce and then, peas, butter, mozzarella, and other ingredients, as mentioned, in the various methods of preparation and various traditions.

Description –
As mentioned above, the raw materials that can “participate” in the preparation of arancini are different, but the most classic recipe is that of arancino with meat sauce.
Therefore the most popular arancino in Sicily is that with meat sauce (for convenience, a substitute for the original sauce), followed by that with butter (with mozzarella, ham and, sometimes, bechamel) and that with spinach (seasoned also with mozzarella). In addition, the arancino “alla norma” (with aubergines, also called “alla catanese”) and the pistachio from Bronte are also popular in the Catania area. The versatility of the arancino has been exploited for various experiments. In fact, there are arancino recipes that include, in addition to rice, of course, the use of mushrooms, sausage, gorgonzola, salmon, chicken, swordfish, seafood, pesto, shrimp as well as squid ink (ink). There are sweet variants: the arancini are prepared with cocoa and covered with sugar (usually on the occasion of the feast of Saint Lucia); there are gianduia cream (especially in the Palermo area) and chocolate, as well as black cherry. Furthermore, to facilitate the distinction between the various flavors, the shape of the arancino can vary.

Production Method –
To prepare arancini, at least the more traditional ones, the original rice is cooked al dente in abundant broth until completely absorbed. It is cooled on a marble surface. Formed of discs of this dough, a portion of filling is placed in the center of each and they close. Then they are passed into a fluid batter of water and flour and breaded in breadcrumbs, ready to be fried.
To cook the rice of the arancino, the use of saffron is widespread to give a golden color to the rice, very compact and clearly separated from the filling.
In any case, the original recipe for arancini does not include the use of eggs, nor for the filling (the original in fact contains a lot of starch and does not need eggs to be tied), nor for the breading.

Gastronomic use –
Arancini or arancine are a product that finds a very varied gastronomic use and also linked to some historical traditions such as that of December 13 of the anniversary of Saint Lucia.
However, this product is consumed at any time of the day, either as a single meal during work or study breaks.
Its characteristic preparation and completeness of food makes this product often a meal that does not require condiments or the accompaniment of other food preparations.
In addition, due to their easy portability, this product is often purchased in rotisseries, bakeries and bars and brought in glove boxes and consumed when there is no possibility to cook something.
The arancino is, in essence, a highly versatile preparation that makes its nutritional completeness an often complete food.