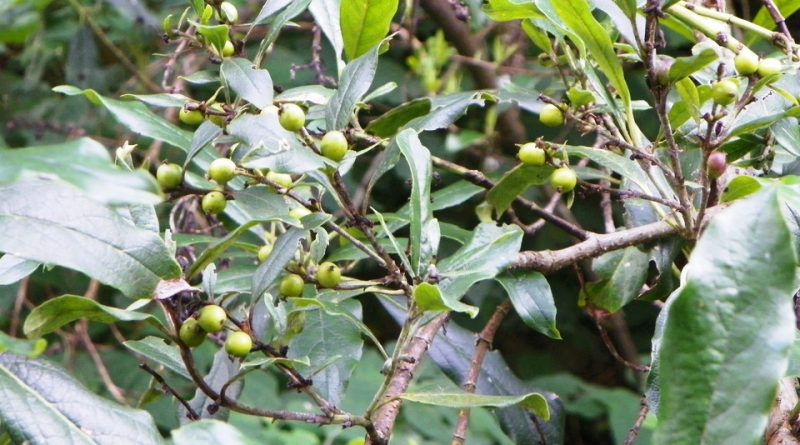 Etymology –
The term Garrya of this kind was dedicated by David Douglas to his English friend Nicholas Garry (~ 1782-1856) trader in the Hudson Bay Company.
The specific epithet laurifolia comes from Laurus (assonant with the Celtic evergreen lauer and with the Sanskrit daru tree, Latin name for laurel or laurel, a plant sacred to Apollo) laurel and folium leaf: with leaves similar to those of laurel. 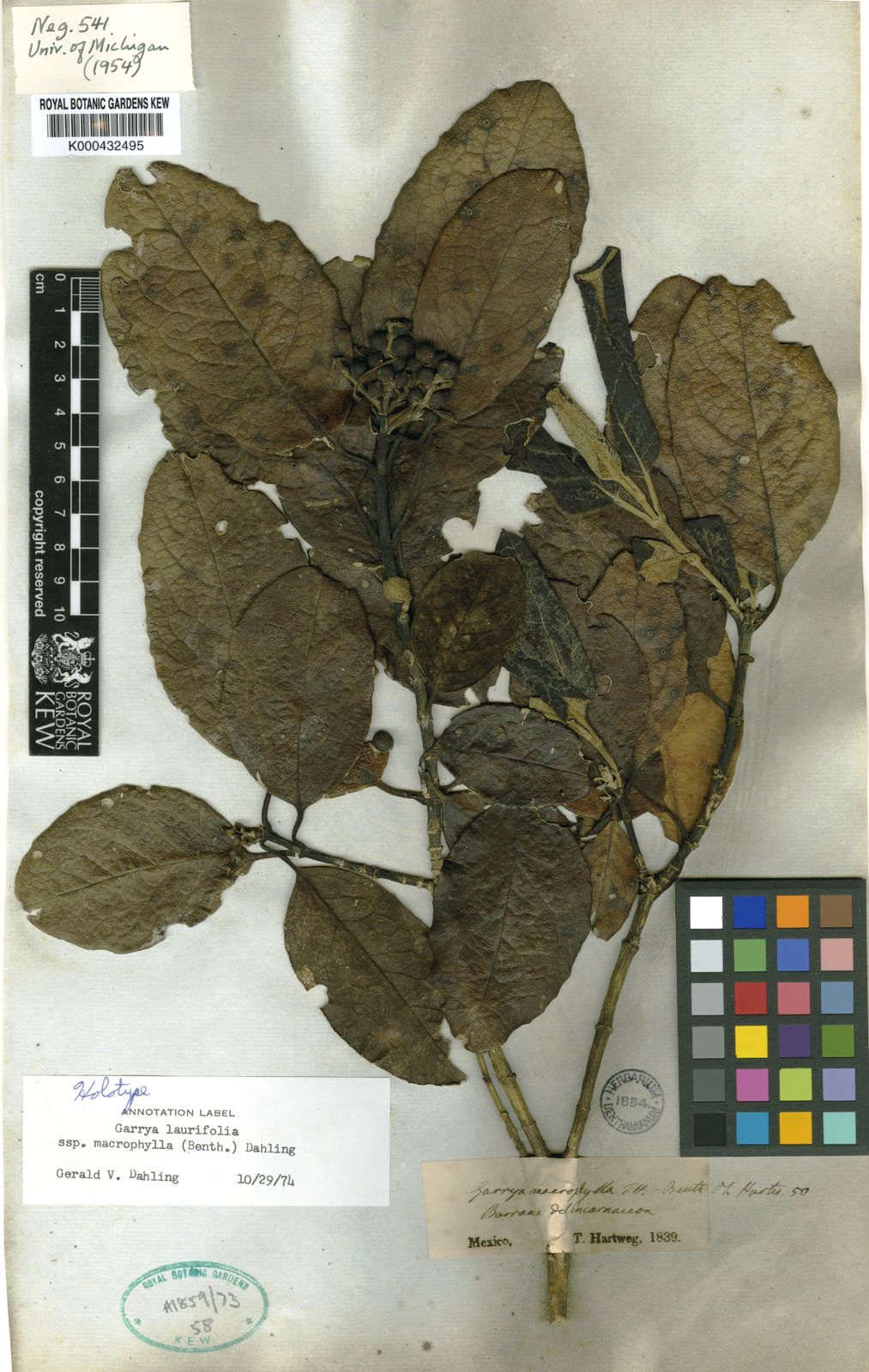 Description –
Garrya laurifolia is a small tree, up to 6 meters high, with a branched base of the stem, decorated branches (in the shape of a cross or cross).
The bark is reddish-brown in color, has a characteristic unpleasant odor, an irregular crown, the young twigs are tomentose and hairless with age.
The petiole is 8-26 mm long, connected to the base and adorned with the stem;
the leaves are elliptical or lanceolate, rarely strictly obovate, from 4 to 16.8 cm in length and from 2.1 to 8 cm in width, with rounded to obtuse apex, sometimes acute, very acute, wedge-shaped base , slightly attenuated or rounded, tomentose to hairless in youth; when the leaves become mature the upper surface is dark green, glabrous, shiny, reticulated-rough, the lower part is hairy to tomentose, the margin is flat or slightly twisted (curved edges), leathery or subcoriaceous, central vein apparent on the surface upper, less evident in the lower part, sometimes covered with brown, whitish or silver trichomes.
The inflorescences are racemose (in the form of clusters), pendulous, more or less dense and compact; the male ones are 2 to 7 cm long, from tomentose to hairy; the female ones are from 2,5 to 6,5 cm long, up to 12 cm in the fruit, very tomentose.
The male flowers are sessile or with 2-3 mm long peduncle, narrow floral bract, lobes connected to the apex, stamens alternating with the lobes, oblong anthers, 1.5 to 4 mm long, filaments of the same length as the anthers.
The female flowers have solitary leaf bracts, from lanceolate to elliptic, frequently adhering to the ovary, evident above all in the infrutescence, reduced perianth, inconspicuous, subglobose ovary, puberulent to pubescent, styles 2, length ± 1 mm.
The fruit is dark blue in color and is more or less ovoid, 8 to 12 mm long, with a short peduncle; 2 or 1 seeds per abortion, from ovoid to subglobose, surrounded by a copious endosperm.

Cultivation –
Garrya laurifolia is a plant that grows spontaneously in territories located at altitudes between 1,000 and 2,600 m. above sea level. In some areas it is cultivated for ornamental use.

Customs and Traditions –
Garrya laurifolia is a plant with medicinal properties.
However, even if there are no consensus opinions, it has been used frequently against headaches and edema.
The bark is bitter and seems to contain an active ingredient: garryine. It is widely used for diarrhea, as a tincture or extract with good results, administered before each meal.
It also contains resin, tannic acid, etc. The alkaloid is present in the bark and root, albeit in different percentages.
Bark decoction is a bitter tonic that acts on the gastrointestinal tract. The decoction or bark extract, in other animals, such as rabbits, caused increased breathing and heart contractions.
However, a fluid extract, even in a 30g dose, administered orally to dogs is not toxic.
This plant is considered poisonous if burned as firewood. Smoking is said to be fatal to chickens; a name, chamel mute “, means in fact tree of the chicken disease.
The wood of this plant was used by the natives to make arrows.
Wood is also used to build violin bows and balls used in the game of kickball.

Preparation Method –
Garrya laurifolia has been used in the preparation of decoctions or extracts of the bark for the treatment of chronic dysentery or for headache symptoms.