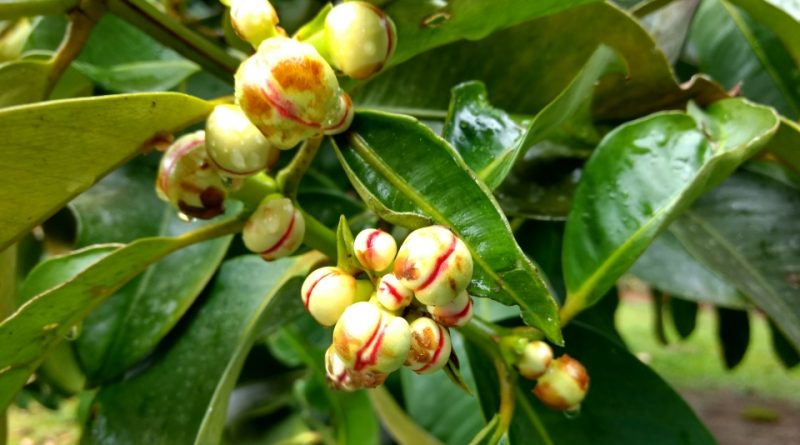 Etymology –
The term Garcinia of the genus was dedicated by Linnaeus to the French physician, botanist and naturalist Laurent Garcin (1683-1752) who herbalized in India, Indonesia, Malaysia, Iran and Arabia.
The specific mangosteen epithet derives from the Latinization of the Indian vernacular name (mangustan in Malay, mangosteen in English).

Geographic Distribution and Habitat –
Garcinia mangostana is a plant native to the Sunda Islands and the Moluccas Archipelago and found mainly in East Asia and Malaysia.
The tree is mainly known for cultivation, but is probably also present in the state also on slopes and ridges in undisturbed mixed dipterocarp forests at altitudes up to 200 meters.
It is currently widespread in Southeast Asia, Southwest India and has been introduced to other hot spots such as Puerto Rico, Florida, southern China, and Kenya. The largest producers in 2014 were India with 15,250 t, China with 4,400 t, Kenya with 2,782 t, Thailand with 2,650 t and Indonesia with 2,376 t. 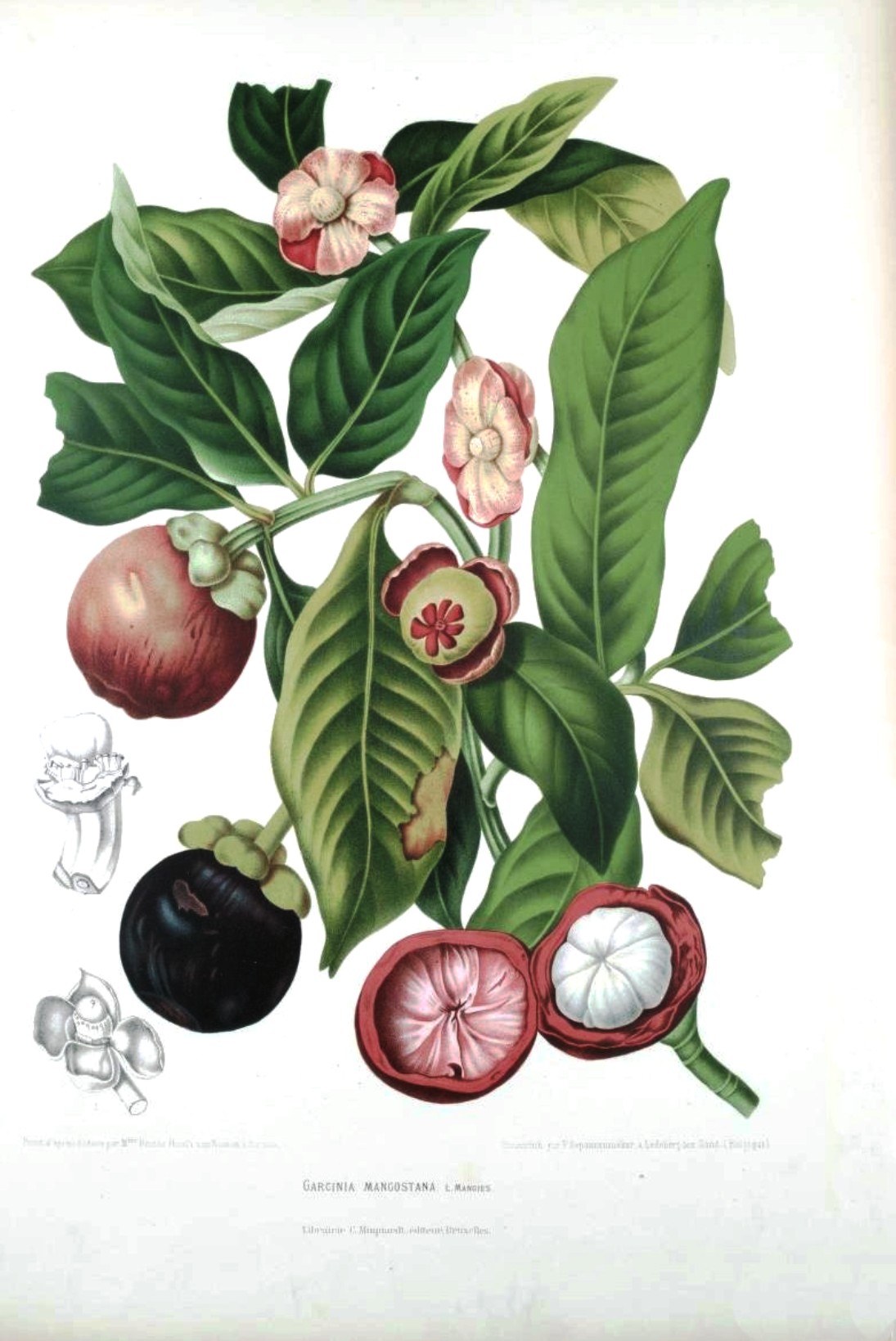 Description –
Garcinia mangostana is an evergreen tree plant that grows to a maximum height of between 7 and 25 meters.
The bark is dark brown to black.
The leaves are ovate, opposite and of a shiny dark green color.
The flowers are pink.
The edible fruit is round in shape, with a diameter of about 5-7 cm, does not necessarily require fertilization (it also ripens parthenocarpically) and in this case it has no seed; when it is unripe it has a light green color, then the peel (pericarp) of the fruit takes on a deep purple color in the ripening period.
From a botanical point of view, the pulp is an aril (pulp detached from the skin and adhering to the seed) which is divided into 4-8 edible lobes or cloves, fragrant and creamy, milky white in color, with a vague flavor of peach and lychee. In the two months following formation, the fruit gradually increases in size as it darkens, the pericarp remains relatively hard throughout the ripening phase.
This fruit is considered to be one of the tastiest fruits in existence.

Cultivation –
Mangosteen is a slow-growing tree that is usually only grown in areas without a dry season and within 10 degrees of the equator. Its cultivation range goes from sea level up to 1,000 meters above sea level, but the growth rate is higher in the lowland areas.
It grows best in areas where annual daytime temperatures are between 20 and 30 ° C, but can tolerate temperatures between 15 and 40 ° C, while it does not tolerate temperatures below 4 ° C, nor above 38 ° C.
It prefers an average annual rainfall of between 1,600 and 2,000 mm, but tolerates 1,100 – 2,800 mm.
This plant grows both in full sun and in dim light.
It requires good, deep and rich organic soil that retains moisture but is also well drained.
From a pedological point of view it grows best in fertile clay with good drainage and prefers an acidic soil, with a pH between 5 and 6, tolerating 4.3 – 7.5.
The plants are intolerant to drought and also need to be sheltered from strong and brackish winds.
It takes at least 8 years for a tree to start bearing fruit, but yields of 200 – 1,500 fruit per tree have been recorded from mature specimens.
In colder climates it can take 15 to 20 years for plants to produce their first fruit.
The trees produce an economic yield of fruit for about 50 years.
Only female forms of this plant are known, but they are able to produce fruit without fertilization.
These plants thrive very well when grown around their banana plants which provide shelter from the wind and plenty of mulch material.
Some of the most fruitful mangosteen trees grow on the banks of streams, lakes, ponds or canals where the roots are almost constantly wet. However, dry weather just before flowering and during flowering induces a good fruit set.
Propagation can take place by seed which has a very short vitality and should be sown as soon as it matures.
Technically, the so-called “seeds” are not true seeds but adventitious embryos, or hypocotyl tubercles, as there was no sexual fertilization.
When growth begins, a shoot emerges from one end of the seed and a root from the other end. This root is short-lived and is replaced by roots that develop at the base of the shoot. As the reproduction process is vegetative, there is naturally little variation in the resulting trees and their fruits.
Some of the seeds are polyembryonic, producing more than one sprout. Individual nucellar embryos can be separated, if desired, before sowing.
The percentage of germination is directly related to the weight of the seed, only fleshy and fully developed seeds should be chosen for sowing.
Due to the long, delicate taproot and poor lateral root development, transplantation is notoriously difficult. In any case, it should not be done after the plants have reached 60 cm. At that point the depth of the taproot can exceed the height of the plant.
Seedling survival is greater if the seeds are planted directly in the nursery row than if grown first in containers and then transplanted into the nursery.
The nursery soil should be at least 1 meter deep. Young plants take 2 years or more to reach a height of 30cm when they can be collected with a deep ball of earth and placed in their final positions.
The seeds are recalcitrant and should be kept in their fruit at room temperature, or in moist peat; these too will lose vitality in 5 days after removal from the fruit, although they are viable for 3 – 5 weeks in the fruit. The viability can be maintained for 1 – 2 months in a humid storage at 20 ° C, the storage temperature of 10 ° C is already harmful.

Customs and Traditions –
Mangosteen is a plant whose delicious raw fruits are consumed. The fruit is aromatic, juicy, with a texture so soft that it almost melts in the mouth and has a sweet and delicate flavor. This is about the size of an apple, the peel can be removed to reveal about 6 grains of white flesh with a sour and sweet flavor, like a cross between grapes and strawberries.
The best table fruits are those with the most stigma lobes at the apex, as these have the most fleshy segments and the fewest seeds.
The seed is also eaten occasionally after boiling or roasting; these add a delicious nutty flavor to preserves when cooked with the pulp.
The plant is also used medically.
The rind is astringent and has been used internally to treat dysentery, diarrhea, cystitis and gonorrhea. It is applied externally to treat eczema and other skin disorders.
The rind of partially ripe fruit produces a polyhydroxy-xanthone derivative called mangostin and also ß-mangostin. That of fully ripe fruit contains xanthones, gartanine, 8-deoxychiaranin and normangostine. A derivative of mangostin, mangostin-e, 6-di-O-glucoside, is a central nervous system depressant and causes an increase in blood pressure.
Decoctions and infusions are prepared from the leaves and bark.
The peel of the fruit is a source of tannins and contains 7-14% of catechin and rosin tannin. Tannins can be used as a black dye.
Among other uses it should be remembered that the twigs are used as chewing sticks. The fruit peels show antifungal and antiprotozoal activity.
The dark brown wood is strong, heavy to the point that it almost sinks into the water; it is also moderately durable. It is usually only available in small sizes, is used in construction and carpentry, to make handles for spears and hammers.
The commercialization of the derivatives of this plant has generated a series of legal disputes.
In Italy, mangosteen juice was marketed in 2009 by the Italian subsidiary of Xango LLC, Xango Italy, which was criticized for using a pyramid-shaped sales method and, in turn, extolling the numerous therapeutic properties of the drink in advertising.
The magazine Altroconsumo published in 2010 an article according to which there were no studies demonstrating the therapeutic properties of the product claimed by Xango, also revealing the admonition received in the United States by Xango LLC in 2006 from the Food and Drug Administration.
The Italian magazine then filed a complaint with the Antitrust Authority for misleading advertising and unfair commercial practice against the product in question. On January 3, 2011, the Antitrust, following a complaint from the magazine, the Ministry of Health and the consumer associations Codacons, Adusbef, and Federsalus, blocked Xango Italy for six months and imposed a fine of 250,000 euros on it for unfair commercial practice. On 9 January 2012, the same authority imposed a further fine of 50,000 euros on the company for non-compliance with the previous resolution, while acknowledging that the problems relating to pyramid marketing had been eliminated from October 2011.

Preparation Method –
Garcinia mangostana is a plant that in addition to the consumption of fruits is used for some present therapeutic qualities.
A decoction is obtained from the leaves and bark which is used as an astringent, febrifuge and to treat thrush, diarrhea, dysentery and urinary disorders.
A bark extract called “amibiasin” has been marketed for the treatment of amoebic dysentery.
In the original areas, an infusion is prepared from the leaves, which combined with unripe banana and a little benzoin, is applied to the wound of the circumcision.
Also in some popular medicines a decoction of the root is taken to regulate menstruation.