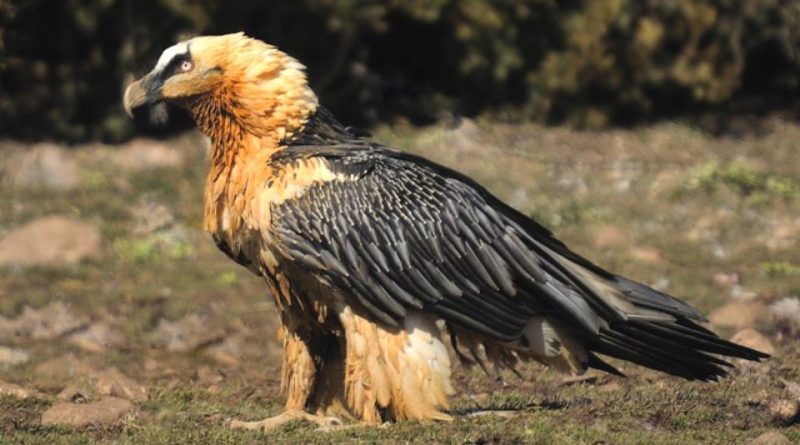 The bearded vulture (Gypaetus barbatus Linnaeus, 1758) is a bird of prey belonging to the Accipitridae family.

Geographic Distribution and Habitat –
The bearded vulture is a bird of prey closely linked to the mountain areas and in particular to the southern mountains of the Palearctic Region (Europe, North Africa and Asia up to Tibet and the Himalayas) and to the eastern and southern mountains of the Afrotropical Region (all of Africa to the south of the Sahara).
The distribution in Eurasia is that of the mountain ranges of the Pyrenees, the Alps, the Corsican mountain range, the Carpathians and the Caucasus, up to the Karakorum, a sub-mountain range located north-west of the Himalayas.
The northern limit is the Swiss and Austrian Alps and the Altai Mountains in Mongolia. In recent years some pairs of bearded vultures have been introduced into the protected area of ​​the Stelvio park, where they have adapted perfectly.
In Africa it is found on the Atlas range, from Morocco to Tunisia, on the Egyptian mountains along the Red Sea, on the Ethiopian Highlands and on the highlands of East Africa up to the mountains of South Africa.
However, despite the abundance of wild ungulates of the African savannas, the bearded vulture has never settled in these flat regions as it prefers mountainous areas with little wood cover where there are rock walls suitable for nesting. 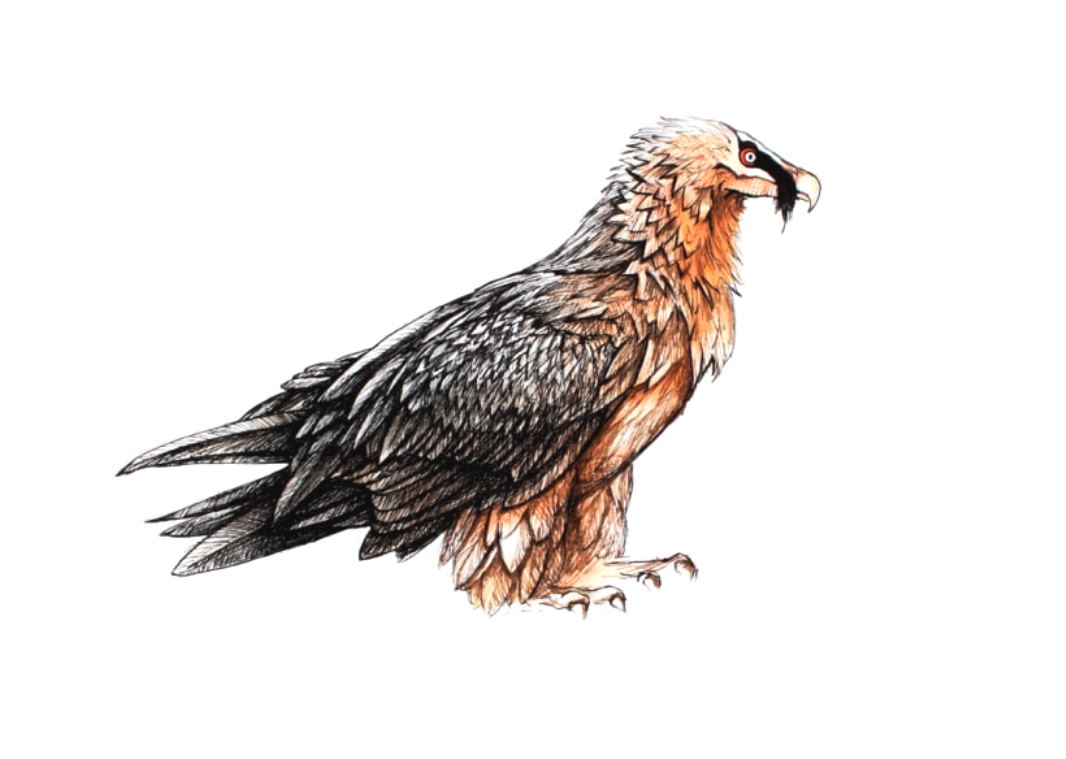 Description –
Gypaetus barbatus is a morphologically intermediate bird between a vulture and an eagle.
It has large dimensions, with a wingspan between 265 and 285 cm, length between 100 and 115 cm, for a weight that varies between 5 and 7 kg.
It has a slight sexual dimorphism with the female which is usually slightly larger than the male, but the difference is not appreciable in nature as well as, moreover, there is no diversity in the seasonal and sexual clothes.
In the adult specimens the color of the plumage presents a clear contrast between the ventral parts and the head, light, and the dorsal parts and the wings, dark.
The cox feathers and the coverts of the wings and the back, although of a dark gray color, are equipped with a whitish rachis that produces light shades.
The head is white and on it stand out the tufts of black whiskers that surround the eye and go down to under the beak to form a sort of “beard”.
The iris is yellow in color and is surrounded by a red membranous periocular ring which becomes particularly evident in moments of arousal.
A particular characteristic of the adult plumage is the rust color of the chest and belly, which is not of biological origin, but assumed from the external environment.
The young specimens have dark plumage, with a blackish head and dark gray lower parts; adults, lower parts and head light, upper parts dark.
They take on the adult dress around 6-7 years of age, when they also reach sexual maturity, after going through a series of several stages with intermediate colorings.
Observing it in flight, it presents a silhouette more similar to that of a large falcon than to that of a vulture.

Biology –
The bearded vulture is a monogamous species but it is not rare that it forms “triplets” of two males and one female and occupies a territory that can reach up to 300 km2 in extension.
In these birds of prey, in the autumn period, after the nuptial parades, the couple begins to frequent the nest, usually built with dry branches and wool, in large cavities or on ledges along rocky walls.
There may be one or more nests, used alternately; the rotation probably takes place to avoid that any damage to the nest (occupation, collapse) leads to a lack of reproduction of the pair.
The spawning period occurs between January and February, and each pair usually lays two eggs (rounded, cream-colored, with spots and dots) 4-7 days apart.
The hatching lasts for 55-60 days and begins immediately after the first egg has been laid and is carried out for most of the time by the female, although often the male takes over by remaining on the nest for 2-3 hours a day. .
The eggs hatch in March, a period in which there is usually an abundant availability of food as with the melting of the snow the carcasses of wild ungulates that died during the winter period come to light.
In the young, immediately after hatching, the phenomenon of the so-called “cainism” occurs, that is, that behavior of dominance of the first born over the younger brother; often the second born is unable to obtain food and dies of starvation within 24 – 26 hours of hatching.
With this behavior the second born is unable to feed and dies shortly after. It is thought that the second born has simply the function of a trophic reserve in the event that the brother does not have a normal development. The phenomenon of cainism is common among birds of prey but is found in this way only in a few other species.
After hatching, the parents remain at the nest, alternating in the search for food that is brought to the chicks with their claws. At first the chicks feed exclusively on meat and only after 7-8 days do they ingest the first small bones. The stay of the adults in the nest decreases over time.
Subsequently, the young of this species remain for about two weeks in an area surrounding the nest. After a month they are already able to make long journeys and accompany their parents in flight.
The bearded vulture can live up to twenty years in the wild and 40 in captivity.

Ecological Role –
The Gypaetus barbatus is known by the names, as well as the bearded vulture, also of: lammergeier, ossifrage.
This bird, like other vultures, is necrophage, as it feeds mainly on carcasses of dead animals, and has an extremely specialized diet, feeding in particular on bones and bone marrow. A typical behavior is to drop carcass bones from great heights, to shatter them and then feed on them.
It feeds on carrion bones, rarely live prey (small mammals and birds); it does not prey on lambs or sheep: when it sometimes settles among the flocks it is to feed on the placenta of the sheep that have recently given birth or on the remains of a dead animal.
In addition to the bones, this vulture does not disdain feeding on turtles, which break their shells with the same technique used to break the bones.
The daily consumption of food of a couple is around 800-1,000 g, an amount that increases up to 1.5 kg during the breeding period of the young; therefore the annual requirement is around 420 kg, equal to about 52 carcasses per year per couple. These eating habits explain the need to occupy territories with extensions that reach, as mentioned above, even 300 km2.
This bird is an excellent flyer both in open spaces at high altitudes and a few meters above the ground when it performs patrol flights in search of carcasses. In fact, an adult specimen spends three-quarters or more of the daytime flying in search of food.
Gypaetus barbatus is a sedentary species and nests on high mountain cliffs in southern Europe, Africa, India and Tibet, laying one or two eggs. It has been successfully reintroduced in the Alps, but continues to be one of the rarest vultures in Europe.
This bird of prey had become extinct in the Alps from the beginning of the twentieth century due to the false legends that involved it; now it is present with a self-sufficient and stable population, thanks to a European reintroduction project that has involved many European states. About 150 individuals have been released in the Alps in the last twenty years according to a reintegration program that has involved Italy, France, Switzerland and Austria, and now there is a small stable population in the Alps, with numerous nesting sites, also in the territory. Italian. In 2017, 46 breeding pairs were estimated throughout the Alps, for a total of 208-251 individuals.
Some specimens have been reintroduced in the Mercantour National Park (France) since 1993 and the Natural Park of the Maritime Alps (Italy) since 1994 and in 2000 in the Stelvio National Park. Since the early 2000s, a pair of bearded vultures, probably from France, has settled in the Courmayeur area at the foot of Mont Blanc.
An approximate estimate is that there are 50,000 individuals in the world. In Europe it became extinct, as a breeding species, throughout the Alps and in vast areas of the Carpathians, the Balkans and the Pyrenees. The few nesting areas still present in the old continent are between 1000 and 2000 m of altitude; in Asia, on the other hand, the species can nest at over 4000 m.
However, according to the IUCN, this species in Italy is still threatened by direct persecution, by the decrease in wild grazing, by the decrease in trophic availability and by saturnism. The species therefore qualifies for the Critically Endangered (CR) category, due to the extremely small number of mature individuals. The Italian population is part of the still small Alpine population which now numbers 14 couples, and since this is still dependent on conservation actions, it does not seem likely that there can be immigration of individuals from outside the region. The final evaluation therefore remains unchanged.