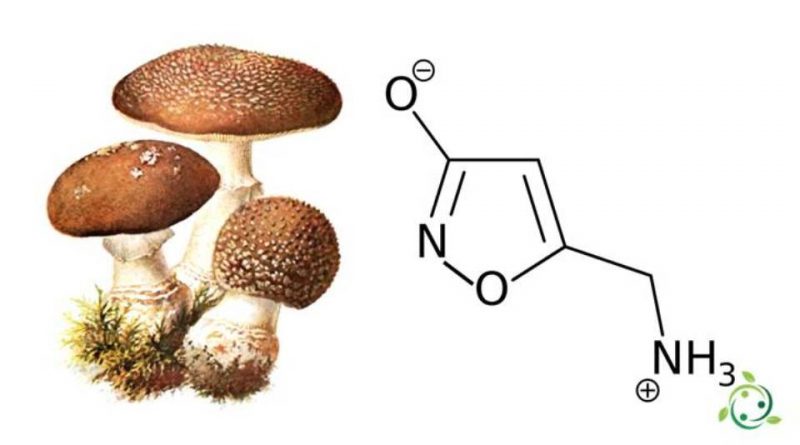 Muscimol, whose term in the official IUPAC nomenclature is: 5- (Aminomethyl) -3 (2H) -isoxazolone is an alaloid.
This substance is also known by the names of 5- (aminomethyl) -3-isoxazolol or 5-aminomethyl-3-hydroxy-isassazole, and again of 3-hydroxy-5-aminomethylisoxazole, agarin or pantherine is an alkaloid with a brute formula or molecular: C4H6N2O2.
Muscimol is an isoxazole alkaloid of natural origin and present in Amanita muscaria and Amanita pantherina.
Muscimol which is a metabolite of ibotenic acid are water-soluble and thermostable poisonous substances that are very active in the human central nervous system. Both mimic (therefore they are agonists) the action of physiologically present neurotransmitters. Ibotenic acid acts on glutamic acid receptors with excitatory effects; subsequently, completely transformed into muscimol, it binds to γ-aminobutyric acid receptors, first causing hallucinatory and then depressant effects.
Muscimol is much more active than ibotenic acid and this fully explains the hallucinogenic and then soporific effects of the second phase of intoxication.

Muscimol is believed to be about 5 times more active than ibotenic acid, of which it is the decarboxylated form. Taken orally, in fact, muscimol is active at 10-15 mg.
Muscimol is eliminated as such in the urine and this characteristic was exploited by some Siberian populations who consumed Amanita muscaria to get drunk, drinking the urine of intoxicated people in order to take advantage of its effects.
Please note that Amanita pantherina is more toxic than Amanita muscaria as it contains more than double isoxazole derivatives (A. pantherina 460 mg and A. muscaria 180 mg for every 100 g of dried mushroom).
Muscimol can be synthesized by decarboxylation of ibotenic acid and is currently being tested for the treatment of Parkinson’s disease. In studies on primates with Parkinson’s, the infusion of muscimol in the subthalamic nucleus and in the internal pale produced improvement of bradykinesia.
Similar infusions made on Parkinsonian patients during brain stimulation produced clinical improvements.