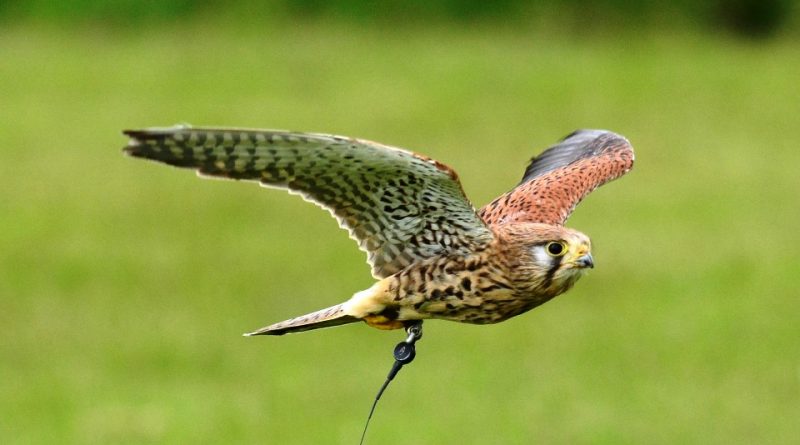 The common kestrel (Falco tinnunculus Linnaeus, 1758) is a bird of prey belonging to the Falconidae family.

Geographic Distribution and Habitat –
The common kestrel is a widely distributed species in Europe, Africa and Asia.
Present and quite common also in Italy.
Its habitat is that of open meadows, steppes and extensive agriculture, alternating with woods and rocky walls; it is also present in urban centers and is widespread throughout the Alpine area from the plain up to 2300 meters above sea level. 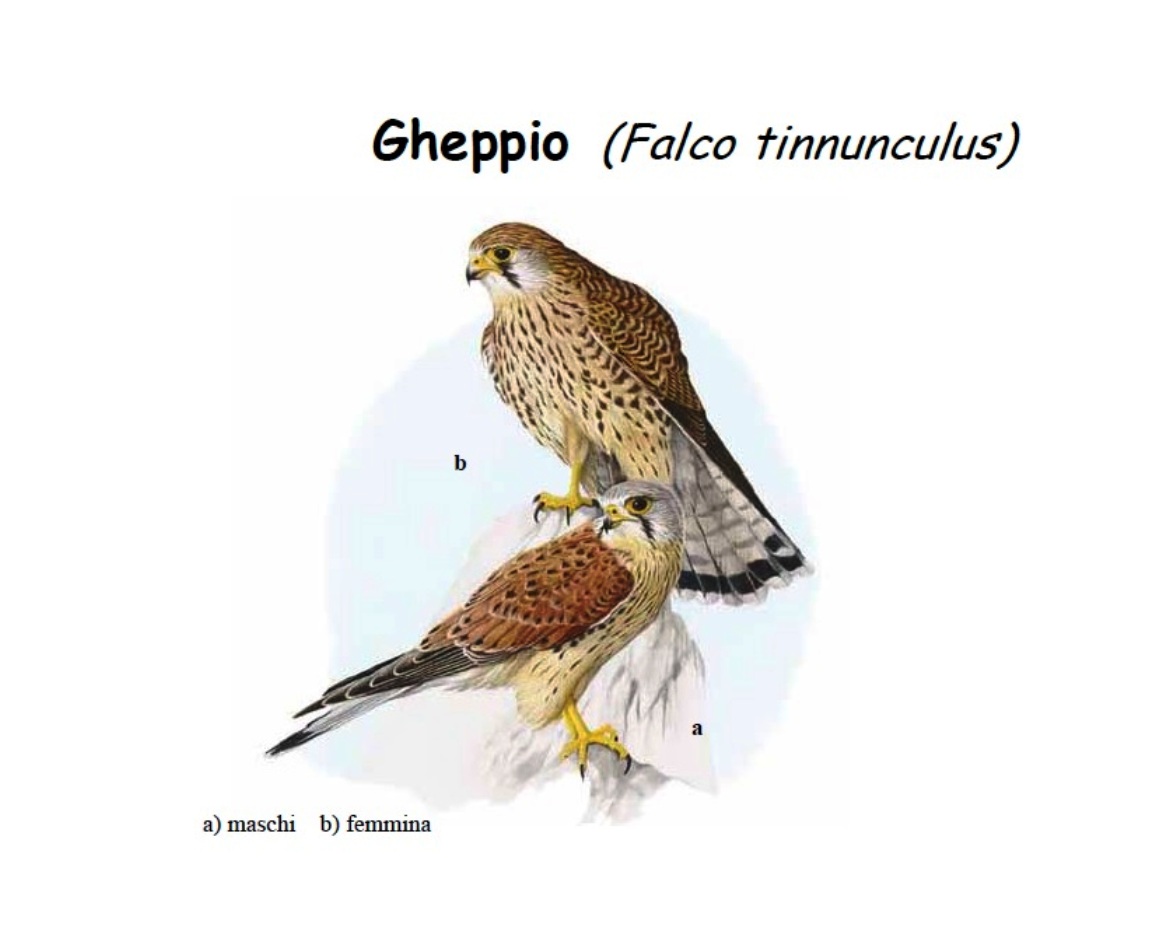 Description –
The common kestrel has a total length of 32-35 cm, with a wingspan of 58-74 cm and a weight that varies between 160 and 215 grams in males and between 190 and 310 grams in females. The species has an evident sexual dimorphism with the males of greater size and weight than the females and slight differences in the plumage.
The most notable feature is that the males have a light gray head, while the females are uniformly brick red. Males have reddish wings and are characterized by some dark spots sometimes in the shape of an asterisk.
The lower back and the tail, i.e. the so-called bundle, are completely light gray with a final black dash and a white border. The underside is light cream with light brown stripes or spots. The lower part of the belly is totally white.
The adult female is bordered with dark in the back. Unlike the male, the bundle is also brown and also shows several lateral stripes and a certain final bond. The lower part is also darker than in the male and shows a stronger size. The young resemble females in plumage. However, their wings appear rounder and shorter than in adult kestrels. Furthermore, the tips of their wing openings show lighter margins.
The skin is waxed and has a ring around the eyes, which are yellow in adult birds; in young birds they range from blue to yellowish green.
In both sexes the tail is rounded as the tail feathers are shorter than the median ones. In adult birds, the tips of the wings reach the end of the tail. The legs are light yellow, the claws are black.
It is also recognized for having a slender body, about the size of a pigeon, but less heavy and with differences related to the subspecies.
The kestrel, like other hawks, has 15 vertebrae in the neck that allow it to turn its head 180 ° and observe prey perched on a tree up to 220 degrees without having to move.
This bird is recognized in flight as unlike other birds of prey, it flaps its wings frequently, but also for the so-called “Holy Spirit” flight, during which it remains totally still in the air, with small flaps of the wings and holding the tail open like a fan, using the wind to stay stable and observe the ground in search of prey.
It emits a series of high-pitched noises. In freedom it can live more than 16 years.

Biology –
Falco tinnunculus is a monogamous species which maintains the pair bond for the whole reproductive season; polygamous behavior can only occur in exceptional cases.
The nest is set up in crevices of the rock, in hollows of trees and buildings; sometimes the nest abandoned by other birds is used. During the year it performs only one brood and spawning generally takes place between April and May. The 4-5 eggs (3-9) are laid with an interval of 1-2 days from each other and are incubated mainly by the female for about a month. The chicks are nests and leave the nest when they are able to fly at the age of 27-32 days. Young people become independent at the end of the second month of life. Both parents contribute to feeding the offspring.

Ecological Role –
Falco tinnunculus is a bird of prey that feeds mainly on small mammals and large insects. It generally has solitary habits.
Regarding its conservation status, this species, although it is still present with relatively abundant populations in Europe, is subject to a moderate decline. The main limiting factor is the low availability of prey following the intensification of agricultural practices associated with the use of pesticides.
The Kestrel is a protected species:
– for which special conservation measures are envisaged with regard to the habitat (Birds Directive 79/409 / EEC, annex I);
– against which international agreements are required for its conservation and management (Bonn Convention, annex II);
– strictly protected (Berne Convention, annex II);
– particularly protected in Italy (Law 11 February 1992, n. 157, art. 2).